Karen Daniels, a physicist at North Carolina State University, woke up a few weeks ago to a new kind of fame. She had a Wikipedia page.

Daniels was one of about 30 female and minority physicists whose Wiki biographies were created in an “edit-a-thon” at the APS March Meeting in Boston. The event attracted roughly 50 attendees, who—in the latest tally—have written 26 new bios and updated 39 existing ones. APS staff, with the support of the APS Committees on the Status of Women in Physics (CSWP), on Minorities in Physics (COM), and on Informing the Public (CIP), partnered with Wiki Education to organize and run the event.

“Wikipedia is the first place many people look to learn about a topic, including physics. However, many prominent, deserving women scientists lack biography pages,” said Katherine Wright, an editor for Physics who proposed the event and helped organize it. “[The event was] a step towards changing that status quo,” she said. 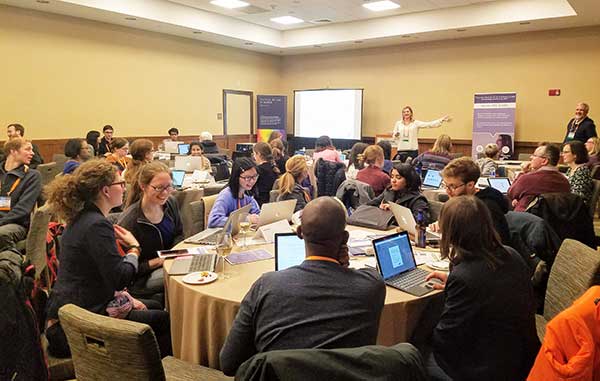 Although Wikipedia is open to anyone, women make up just 10-15% of its editors—or “wikimedians.” The source of the discrepancy is hard to pin down. It could come from women having too little free time or being turned off by Wikipedia’s occasionally aggressive editor culture, said Jami Mathewson, Director of Partnerships for Wiki Education. The dearth of female editors may also explain why fewer than 20% of English-language biographies are about women.

Edit-a-thons like the one in Boston aim to address the Wikipedia monoculture. At the event, novice Wikimedians learned the dos and don’ts of editing in the company of colleagues (and refreshments.) And they had access to a list of deserving female and minority physicists on a shared dashboard. (Wikipedia ties an academic’s Wiki-worthiness—or, “notability”—to such things as prestigious awards, impact on a field, or running an academic journal.) APS staff and CSWP, CIP, and COM members helped contribute roughly 100 names, many of whom were APS Fellows or had been awarded APS prizes.

Jess Wade, a physicist at Imperial College London and activist for female physicists, stirred the crowd with a talk about improved diversity in science. She expressed frustration at seeing so few Wiki pages for brilliant women when ample words had been spilled about “obscure football teams in the north of England.” (Donna Strickland of the University of Waterloo, one of last year’s winners of the Nobel Prize in Physics, couldn’t be found on Wikipedia until the day she won.)

In a crash-course, attendees learned how to draft a biography in their Wikipedia “sandbox” and to back up their statements with verifiable sources, such as articles in trusted newspapers or a peer-reviewed journal. Representatives from Wiki Education reviewed the drafts, providing tips for improving the sourcing or punching up the writing before making the pages go live.

Daniels admitted to feeling a “little weird” about having her own Wiki page. But she loves seeing the new bios for women pop up. “School kids draw inspiration [from them]—and there [are now] a lot more there,” she said.

View a brochure from Wiki Education that provides tips about editing Wikipedia pages.

The author is Editor of Physics.