Each year, the APS March Meeting holds a special symposium sponsored by the Kavli Foundation that features outstanding physicists who have made important breakthroughs. This year’s Kavli session was organized around the theme “From Unit Cell to Biological Cell.” 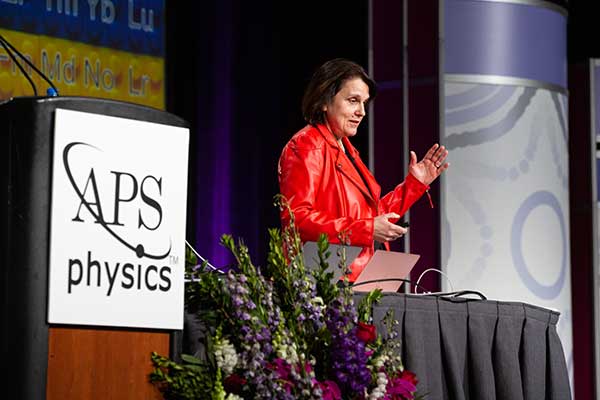 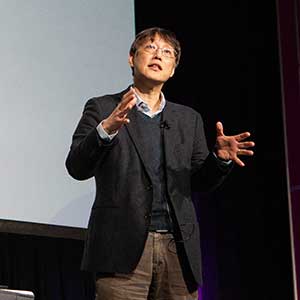 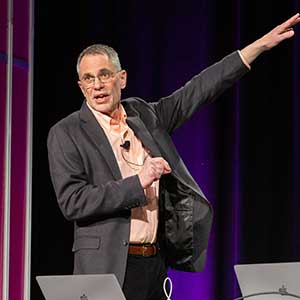 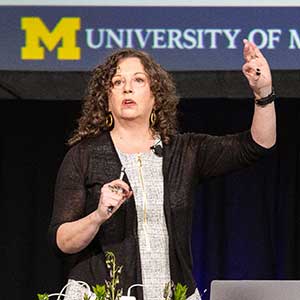 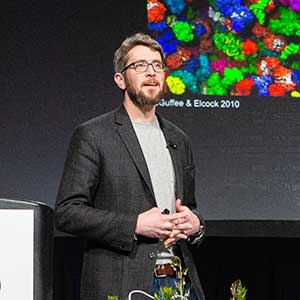 Heusler compounds, which Felser studies, have simple cubic lattice structures and consist of only three elements, but the composition can be manipulated to create a myriad of materials for many different purposes. The first Heusler alloy, discovered 125 years ago, combined manganese, copper and aluminum—none of which are magnetic—to produce a compound that was ferromagnetic at room temperature. Felser showed the potential of using different elements from the periodic table in novel topological configurations to produce new materials with a range of properties, such as semiconductors, topological insulators, and magnets.

Kim discussed another versatile method for creating materials with varied properties by stacking 2D sheets of material, a process pioneered using graphene. Like Heusler compounds, the resulting properties of 2D stacked materials depend both on which elements are used and how the material is manipulated. For example, the big story of last year’s APS March Meeting, was creation of a superconductor by stacking two layers of graphene, with one layer twisted to at an optimal angle.

By stacking different atomically thin materials with structures similar to graphene, many types of materials can be created, like magnetic materials or semiconductors. According to Kim, a number of these stacked systems have predictable results, but there are plenty of new combinations of these 2D materials that remain unknown and could have interesting properties, leading to new physics. The more layers, the more complexity—and the more things the 2D system may be able to do. Using the structures created from stacked 2D materials and connecting them together has applications in electronics development.

Ediger moved away from neat stacks of materials to the disordered structures of glasses, which are highly variable. Creating highly stable glass is important for continued development in modern electronics, like OLED (organic light emitting diode) displays now found in some smartphones or optical fibers. Ediger discussed a method of creating glass that will provide higher density and low-energy amorphous packing: instead of cooling a molten liquid, the usual method of glass creation, he proposes using vapor deposition.

A typical method of glass creation involves a supercooled liquid slowly turning into a glass, where different cooling rates create different types of glasses. But to form the high-density glass states Ediger is interested in would take years using this method. With vapor deposition, collecting gas on a cold substrate to create thin but dense glass takes about an hour. The higher density occurs as the molecules fall to the substrate like blocks in the computer game Tetris and have the opportunity to switch positions to pack together as tightly as possible. Just a one percent increase in glass density achieved by vapor deposition can increase photostability of OLED displays substantially, leading to increased efficiency and device lifetime.

In contrast to forming the disordered states of glass, Glotzer discussed the formation of crystals in the absence of energetic interactions. She introduced the notion of the entropic bond, the idea that particles jostling together in a space will become ordered as they find the best packing structures. The spontaneous formation of the ordered crystal state seems counterintuitive, but Glotzer explained how entropy can order matter.

Ten years ago, one of Glotzer’s students found that tetrahedra self-assembled into a quasicrystal, but now she’s seen over 100 other nanoparticle shapes that also form crystals. The formation is driven by the system seeking maximum entropy, which in turn means finding the maximum number of possible microstates—and for some shapes, including spheres, there are more ways to be organized than disorganized.

Brangwynne rounded out the Kavli session with applications of soft matter physics to biological systems. Molecules within living cells undergo self-assembly to fulfil certain functions. Brangwynne’s research primarily deals with structures on a size scale between nanoscale—like protein folding—and the macroscale of visible cells: The rules for assembling mesoscale structures like organelles are not well understood but studying such biological structures and their rules for assembly could result in new physics.

Many people remember organelles from high school biology, but as Brangwynne points out, all of these organelles are membrane-bound. But his interest is in fluids of intercellular material that move inside the cell to control what form the cell will take. As Brangwynne has shown, liquid-liquid phase transitions inside the cell, driven by intrinsically disordered proteins, may have implications for the activation of specific genes.

All of the Kavli lectures can be viewed on the APS YouTube channel.