Chris Voigt pulled up a slide of an old-fashioned calculator display: a sequence of segments programmed to light up a desired digit. Except that Voigt’s jointed figure eight, pieced together with seven segments, had a twist. The segments consisted not of LEDs, but of bacteria that lit up when fed a specific chemical input.

Voigt, a researcher at the Massachusetts Institute of Technology, along with other interdisciplinary researchers in synthetic biology, presented the latest work in the field at this year’s March Meeting. Broadly defined, synthetic biology involves “applying engineering principles to biology,” says graduate student David Specht of Cornell University, who approaches the field from a physics background. Essentially, synthetic biologists alter the internal “software” of biological cells—their DNA—to control their functions. 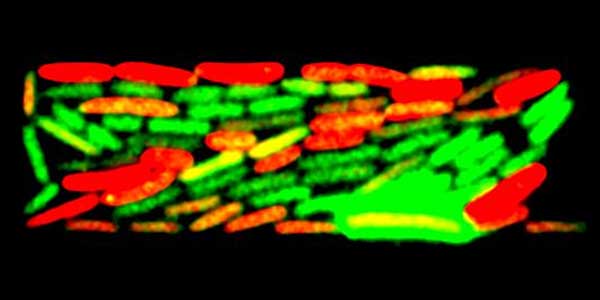 Researchers use DNA circuits to control fluorescence in E.coli in a simple demo.

In particular, synthetic biologists want to exploit cells’ abilities to process raw chemicals into other molecules, says Jean-Christophe Baret of the University of Bordeaux in France. One relatively mature application, now offered commercially, is to use genetically modified yeast cells to produce chemicals used in perfumes and biofuels.

But researchers want to go beyond their primitive control over yeast, since they actually can’t regulate the yeast’s processes well. “The yeast will make so much chemical that it just drowns in its own waste,” says Specht. By developing methods to control hundreds—or even thousands—of genes, synthetic biologists are pursuing more control over a variety of cell types. Eventually, they want to design and produce biological cells at a scale comparable to electronic circuits.

They aim to achieve this, in part, by designing DNA segments to mimic the logic operations of electrical engineering. Cells respond to inputs according to their DNA instructions to grow, produce proteins, or divide. By introducing engineered DNA sequences like extra lines of code, researchers can control what the cell does.

To this end, Specht has designed DNA segments that function as “NOT” logic gates inside an E. coli cell. A NOT gate in a conventional computer switches a 1 to a 0 and vice versa. In a cell, when the NOT gate senses a specific molecular input, it halts the production of a protein. If the molecule is not present, the gate initiates protein production.

Other groups have demonstrated similar NOT gates in the past. However, when multiple NOT gates are used within a cell, they often unintentionally interfere with each other—“crosstalk,” as Specht calls it. This type of interference is common in synthetic biology because cell components are often unexpectedly coupled. Specht has developed a technique to efficiently test whether two NOT gates will interfere, which he has tested on combinations of 128 different NOT gates.

Specht’s labmate, graduate student Yasu Xu of Cornell University, is designing a toggle switch for E. coli. It’s a segment of DNA that can either be “on” or “off.” Depending on its setting, it can turn on or off the production of a protein depending on the presence of chemicals in the cell. Xu is tweaking the switch to respond to specific concentrations of chemicals, which means the bacterium can serve as a sensor, she says. This switch could potentially also serve as information storage inside the cell as a bit: one setting of the switch could correspond to 1, and the other 0.

About a decade ago, in the field’s infancy, researchers designed these so-called genetic circuits from scratch in a long, painstaking process. To speed up the design process and build more complex circuits, Voigt’s group has developed a platform known as CELLO, similar to computer-aided design programs used in electrical circuit designs. The software compiles their code into a diagram made of individual gates and creates the DNA sequence associated with the function. Researchers can send this design to an outside company, which will synthesize the DNA circuit.

In addition, researchers are also engineering the chemical reactions that power the the metabolism of the cell. By controlling these reactions, they can adjust the protein production rate of a cell, for example. Such cells could be used in industrial processes but could also be useful for fundamental research as well: such systems could be used to test hypotheses about the origin of life, says Baret.

Baret’s group studied a metabolic process inside tiny water droplets encased in oil—simplistic models of living cells—on a chip. They inserted glucose, along with two biological compounds known as NAD+ and NADH, into the droplets, to engineer reactions in which glucose helps convert NAD+ to NADH. They chose to study this process because in a functioning cell, the conversion of NAD+ into NADH is “like a motor, in the sense it converts the chemical energy of glucose into work that the cell can use,” says Baret. With laser monitoring of concentrations, they showed that the ratio between NAD+ and NADH maintains a steady state, as occurs in living cells. In future studies, Baret wants to place the glucose outside of the droplet and engineer the cell to consume the glucose on its own to drive the chemical conversion.

However, biological circuits offer some distinctive technical challenges: Cells expend a certain amount of their energy to keep themselves alive, and it’s unclear whether these processes could be turned off to produce desired chemicals more efficiently. Cells must also function in a constantly fluctuating environment. In addition, genes are often coupled in unexpected ways. Researchers have to be careful that the modifications they introduce into the cell do not play havoc with some other important function. So while researchers are achieving some promising results, their ultimate vision of versatile, mass-produced synthetic cells is still many years away.