This year’s APS March Meeting featured a special symposium in honor of the 90th anniversary of the founding of Reviews of Modern Physics (RMP).

Please also join the editors of RMP on Tuesday, April 16, in Denver at the APS April Meeting for a special plenary session with three distinguished speakers marking the 90th anniversary of the journal. Wim Leemans (Lawrence Berkeley Laboratory) will discuss laser-based particle accelerators, Elena Aprile (Columbia University) will give an update on the search for dark matter, and Andrea Ghez (University of California Los Angeles) will talk about physics at the center of the Milky Way. For more see the 90th Anniversary of the APS Reviews of Modern Physics webpage. 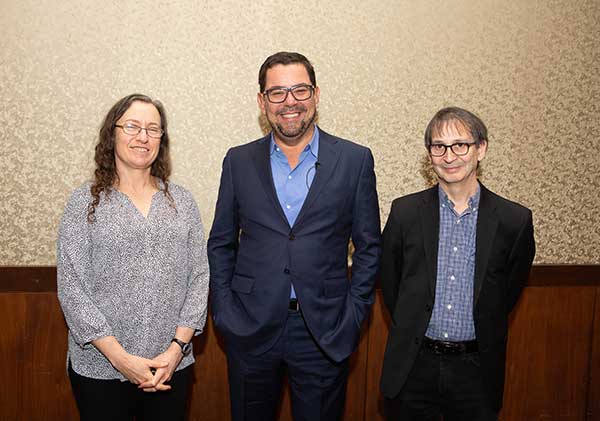 Three speakers at the Symposium covered the unique aspects of Reviews of Modern Physics and the articles published over its 90 year history. L-R: Frances Hellman (Frances Hellman, University of California, Berkeley) spoke about interfaces and magnetism; Antonio Castro Neto (National University of Singapore) talked about the science of 2D materials; and Nigel Goldenfeld (University of Illinois at Urbana-Champaign) discussed the role of RMP in the field of statistical physics.