“Is this uncomfortable for you?” I ask NASA scientist Bruce Wielicki in the crowded Boston Convention center hallway. The benches nearby are all occupied, so to do our interview, we have plopped down on the floor by the windows.

“I’m fine,” he assures me. Over the next 75 minutes, Wielicki proceeds to patiently describe his life’s work in climate science from the carpet.

But that mission is just a tiny slice of Wielicki’s bigger goal—he wants to build an international observatory dedicated to monitoring climate change over decades. To do this, he needs to get scientists and politicians globally on board, and he has come to his first APS March meeting to recruit physicists to the cause. After presenting in a session and attending a networking dinner, Wielicki says he’s found a handful of physicists interested in his work. In a conversation bouncing between enthusiasm and cautious pragmatism, Wielicki tells APS News of the journey so far. 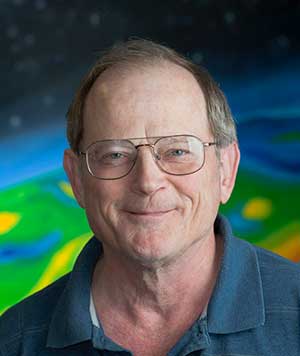 Make the case for us. What is this observatory you want to build, and why do we need it?

We don’t have a climate observing system rigorously designed for collecting data over long time scales. Everybody’s been doing their own individual missions. Maybe one satellite’s spectrometer is optimized for quantifying chlorophyll in the oceans, and another is optimized for studying aerosol properties. Each satellite’s instruments are designed to measure reflected solar radiation in a range of different wavelengths, and you end up with this mess where it’s hard to compare data collected by different satellites.

So I’m proposing this: what if the countries of the world agreed to design, build, and maintain a dedicated climate observatory system? We did this with weather forecasting back in the 50’s and 60’s. For example, the UN established the World Meteorological Organization, which coordinates international infrastructure to produce and disseminate weather forecasts.

Where do things stand now?

The CLARREO Pathfinder mission that I’m leading is a small step toward standardizing climate data. It’s a spectrometer that will go on the ISS for calibrating instruments on satellites. It’ll cross the orbits of various satellites 1,300 times. During these orbit crossings, it’ll take data that correct for calibration drifts. The most common cause of these drifts is from contaminants in the instruments that get fixed on optical components by direct solar UV exposure. The effects can be larger than 10 percent over a decade or less. CLARREO will calibrate these drifts and make for a more accurate climate record in the long term.

I’ve also collaborated with Roger Cooke, an economist, to publish several papers on the long-term economic benefits of building an international observatory. We calculated a metric called value of information (VOI). VOI is essentially an estimate of the economic value of accurate climate data, assuming that the government uses it to prevent climate-related disasters. We’ve estimated that for each dollar we invest in the observatory, it will return around 50 dollars in avoided damages. The economic models we use add around a factor of 5 of uncertainty, so the return on investment ranges from about 10 dollars per dollar to 250 dollars per dollar. Working with other climate scientists, I’ve put together a whitepaper making the case for this idea for the U.S. Global Change Research Program, which is the head group of all the scientific agencies. We’ve also published several academic papers on this.

So we have all sorts of documentation that we need to build this observing system. But no one has said, dang it, it’s worth it, let’s go ahead and do it. I’ve been giving talks about building it for about five years now. It doesn’t appear to be going anywhere.

In the U.S., we have thirteen agencies doing climate research. But none of them does climate research as their number one job. It’s always their third or fourth priority, whether it’s NASA, NOAA, or the EPA. So what happens is a curse of the commons. No one is responsible for it. No one fails in their jobs if they don’t do climate science. It would help dramatically if we had an agency whose primary budget was dedicated to climate change, but I doubt the U.S. will do it, politically.

The scientific community has a share of the blame, too. As I’ve given these talks, it struck me how we seem to be crippled. I initially thought, naively, that once my work on the economic value of this observatory got published, the scientific community would get behind it—that we’d triple climate science research and start pushing to build this system.

But nope. That’s not what happened. Scientists tend to be narrow specialists. Climate science is this huge complex system involving 50 essential variables. No single scientist understands all of it. When given a big picture problem like building this observatory, most scientists tend to think that it’s someone else’s problem. Their focus is on their next grant, next paper, next postdoc.

What are you hoping to communicate to physicists?

I’m hoping to open people’s eyes to a new way of looking at things, to think about climate science in a business framework. Scientists typically start with a budget and ask what’s the most important science to do within that budget. Instead, I’m saying we should think of climate science as investing in a business. The question is, how much should society invest? Right now, there’s been five journal papers written on this topic. Roger Cooke and I have written four of them. We need more diversity.

So my goal here is to get more scientists to collaborate with economists. It takes some courage to take that step. Scientists don’t know economics, and economists know very little science. But this is a totally unplowed area of science. I’m trying to explain to people that it didn’t take Roger and me very long to learn enough economics and enough climate science to do something useful.

So what will it take to get this observatory built?

For millions of years, we’ve had to protect ourselves from short-term threats—lions and tigers and storms. A long-term threat, distributed over the whole world on a fifty-year time scale, is so foreign to our genes. Our emotions are usually what force us to make decisions. But we don’t react emotionally to climate change; it’s a purely intellectual threat. We may be so dysfunctional in terms of long-term strategizing that we are literally marching off into oblivion.

Sophia Chen is a freelance science writer based in Tucson, Arizona.