On the last day of the APS March Meeting, a rag-tag team of science writers, graduate students, scientists, and future physicists entered the lab of the famous (if fictional) Professor Schrödenberg and were issued a challenge: Solve a slew of science-based clues to unlock the Professor’s computer and submit her research proposal to DARPA—in 45 minutes or less.

The challenge came courtesy of a real physics professor, Paul Kwiat, and the University of Illinois Urbana-Champaign, who brought LabEscape, a physics-based escape room, to life for the first time in 2016. LabEscape’s original iteration and a sequel can be found at Lincoln Square Mall in Urbana, Illinois but Kwait and his own team of graduate students brought a special version to Boston, just for the March Meeting. 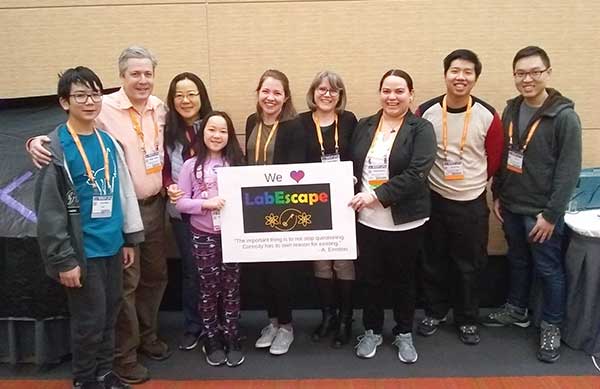 A team of intrepid adventurers successfully escaped the laboratory of Professor S.

Success in LabEscape requires the same skills as science: experimentation, collaboration, and out-of-the-box ideas. During the pre-challenge briefing, Kwiat did a short demo of what kinds of things we might expect to see inside the lab and handed out explainers of physics concepts, like refraction and spectroscopy, that emphasized ideas many people learned in high school or middle school. However, Kwiat cautioned the team to not rely too much on our own knowledge of physics, but to carefully examine each clue.

Our team consisted of: graduate students Yi Wei Ho and Jun Hao Hue from the National University of Singapore; three science writers—Emily Conover of Science News, Amanda Babcock, freelancer extraordinaire and myself; and a family of four—Oak Ridge National Laboratory physicist Michael Manley, his wife Anne, a geochemist, 13-year-old Ryan, and 9-year-old Catherine. Ryan and Catherine would prove invaluable, often spotting clues the rest of us didn’t. The time to beat for the week to escape the lab was around 33 minutes, a record set by a group of local high school students.

Upon entering the makeshift lab as “interns,” our team was greeted with a video call from our new supervisor, top quantum physicist Professor Schrödenberg. She tasked us with logging in to her computer and submitting her latest research proposal to DARPA before the deadline since she was stuck on a plane. The only problem? A dropped call before she could share her password, setting off our quest to discover what it might be, guided by the many clues scattered throughout her lab.

It’s a slightly lower-stakes scenario than Kwiat’s first version of LabEscape, in which Professor S and four government agents have gone missing, endangering national security—a nod to an important potential application of quantum computing. Kwiat has also created a sequel for LabEscape enthusiasts, and now he’s looking to expand LabEscape to new locations, like science museums.

As the clock began ticking, with the professor’s research—and probably our careers as interns—hanging in the balance, the team split up, each of us running to different parts of the lab to begin our search for clues. Almost every item in the room had a purpose, from the innocuous posters of physicists lining the walls to an iPod clipped to a lab coat that gave musical cues. Along the way we encountered real scientific instrumentation, like a laser interferometer and a beam splitter that helped us uncover the code to a safe, and we used physics data to crack the code. Every person on the team contributed, with building excitement every time a new safe was opened or discovery made.

The escape room, which felt like a real-life treasure hunt complete with encrypted and hidden messages, took about three months for Kwiat and his LabEscape team to put together. Kwiat was inspired to create LabEscape after he visited a different escape room—which he says he failed. The original LabEscape mission took about six months for Kwiat to mastermind with the help of graduate students from UCIC and funding from the APS outreach mini-grants program.

In the end, we made it out of the escape room after submitting the professor’s research, thanks to a small extension of the grant proposal deadline, finishing in about 52 minutes.

For more information about LabEscape, or to book your own visit to the lab, visit labescape.org.