A Journey Through Quantum Space and Time

For the past several years, Brian Schwartz, City University of New York, and Smitha Vishveshwara, University of Illinois Urbana-Champaign (UIUC) have collaborated to bring something unexpected to the APS March Meeting in Boston: physics-themed theater performances. This year’s evening of culture stands out among the rest in that it gave the audience two original works back-to-back. The evening started with Quantum Voyages, an original play written by Vishveshwara and Latrelle Bright. Following the play was a live performance of “A History of Physics in 13 Songs” written and performed by Oakland University physics professor Alberto Rojo.

Premiered at UIUC, Quantum Voyages was produced and directed by Vishveshwara and Bright. The original cast—a mixture of undergraduate theater majors and graduate physics students—made the trip to Boston to perform for the March Meeting crowd. The cast members’ passion for the physics in the play helped communicate the complex topics at hand and kept the audience enthralled. 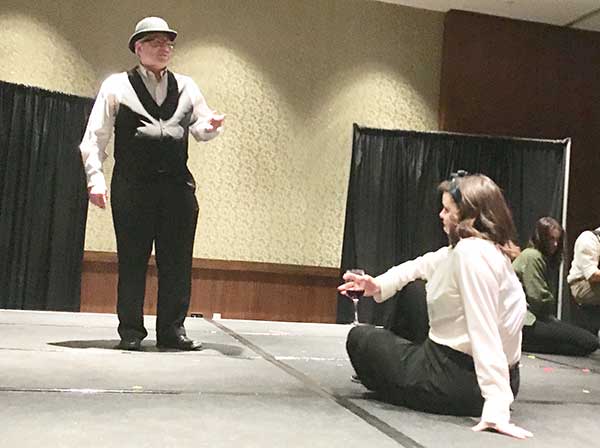 Actors and physicists take the audience on a journey through the quantum world.

The play follows Terra and Akash on a journey of curiosity led by Sapienza, the spirit of wisdom, through the wonder and perils of quantum landscapes. A “quantum ensemble” provided the backdrop, acting out a living electromagnetic spectrum, a crystal structure in which electrons moved, a superconducting surface, and many other quantum phenomena.

Throughout the performance, “quantum sages”—physics professors local to Boston or from UIUC—would appear to share their wisdom and explain some quantum phenomenon to the pair and, on one comical occasion, give an exasperated Sapienza a glass of wine.

One highlight of the performance was a charming representation of Schrödinger by Lily Newton, a former physics major at UCIC. In a monologue to the two adventurers, Newton explained the concept of quantum superposition completely in German. After a moment of initial confusion and audience laughs, Sapienza (played by Kalan Benbow) translated the monologue.

Newton fooled the audience with her convincingly fluent German thanks to careful preparation. “[Newton] studied with a native speaker,” Vishveshwara confirmed. She also noted that the monologue came in part from Erwin Schrödinger’s cat paradox paper.

The ensemble’s creative representations of quantum phenomena included acting out a game of Clue to illustrate the confusion of being in two states at once—in this case both dead and alive at the same time. At one point in the action, the ensemble acted out discrete quantized levels in a diagonal line across the stage, each actor running in place at different “energies.” The quantum voyage ended with a representation of an MRI machine, using a long, blue glow light to scan a collapsed Terra. Sapienza then returned the adventurers home. Their newfound knowledge inspired the pair to ask bigger questions, seek more answers, and appreciate that what is seen is not all there is to see.

The evening continued with the performance of “A History of Physics in 13 Songs.” Rojo was joined by Michael Gould on percussion and Dave Haughey on cello with Lynnae Lehfeldt providing narration. Lehfeldt’s practiced theater voice resonated over the music, reading a variety of historical material from published papers to personal letters, alternating with Rojo’s vocals.

The songs covered a select list of important figures in physics history, beginning with Galileo. Letters from Maxwell to Faraday formed the basis for a song on the discovery that light is an electromagnetic wave. A song inspired by Richard Feynman, titled “Trees are made of air,” relayed the idea of carbon sequestration in trees. The last song of the night focused on Vera Rubin, using jarring strains to communicate the unexpected galactic rotation curves, a discovery supporting the existence of dark matter.

The author is a freelance writer based out of Goodland, KS.