Impressions from the APS Division of Nuclear Physics Fall Meeting

Note: The APS Division of Nuclear Physics (DNP) is committed to providing an inclusive space where physicists can exchange ideas and share their interests in nuclear physics, regardless of the origin, color, gender, sexual orientation, gender identity etc, of the scientist.

In this context, last year the DNP requested stories from the membership. Rather than present each story in isolation, we have chosen to collect them as though they happened to one young woman as she navigates DNP meetings. Each incident related in this compendium was submitted to us as an actual personal experience, however, only a fraction of the stories are included in this first edition (others stories will be part of future editions). All names have been changed to protect confidentiality. 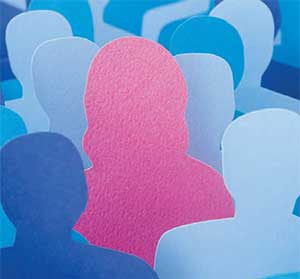 Wednesday 8:30 a.m.
After our registration, my advisor told me he would introduce me to this famous physicist that was standing in the lobby. I got so excited. He just looked at my name badge, nodded in recognition and said he thought I was a man. Clearly this person needs to work on his implicit bias and expand his imagination to include women physicists…

Wednesday 11:00 a.m.
At the coffee break I was just standing around and overheard this group talking about climate change. Someone questioned the hard evidence. Everyone ridiculed this person just for asking questions. But aren’t we scientists? Aren’t we supposed to be able to ask questions?

Wednesday 2:00 p.m.
I just had lunch with a couple of female students from my university. They were telling me about their visit to X National Lab. Apparently they were stopped by an armed guard. After asking protocol questions, he told them: “some days I just want to shoot all women physicists.” He then explained it was just a joke but they couldn’t take it as such. They felt very uneasy but didn’t respond. I think they should have reported the guy. What is wrong with these people that they think joking about murdering women is ok?

Wednesday 5:00 p.m.
I’ve been trying to talk to my advisor but every time I spot him, he seems to get busy talking to somebody else. I’ve emailed him the slides but still have not heard back. I’m stressing out with my talk! Doesn’t he remember my talk is tomorrow morning?

Wednesday 8:00 p.m.
I just had dinner with Eric and my advisor. Food was awful and the place was noisy. My advisor set a meeting with me for 10pm tonight in the hotel, because he needed to meet with Eric first. Eric is also a grad student in our group but he is one year ahead of me. I agreed to meet at 10:00 p.m. but seriously?? I need to give a talk tomorrow and wish I could sleep…

Wednesday 11:00 p.m.
I just met with my advisor. Instead of going over my slides, he declared he was helping me too much and his colleagues were thinking he is having an affair with me. I tried to argue that he spends more time with Eric than with me and I am less experienced as a grad student. This is my first conference! He quickly concluded the meeting saying I should just try to be more independent.

Thursday 6:00 a.m.
I woke up in the middle of the night and I could not sleep anymore. Couldn’t stop thinking about what my advisor told me. Instead of milling, I decided to practice my talk again and again. Now I am more than ready!

Thursday 10:00 a.m.
Eric said my talk went fine and Matt said I looked very professional. Still, I feel terrible... I am disappointed that my advisor didn’t turn up but much worse was this creepy guy in the front row. He stared at my ankles the ENTIRE TIME! I would walk from one side to the other and his eyes would follow my ankles. I am wearing a skirt below the knees and normal flat shoes, so I don’t understand his focus. It was creepy and I felt so vulnerable.

Thursday 1:00 p.m.
I had lunch with Nancy. She is a postdoc from my university and works on precision measurements. I had never seen her so upset. Her talk was about these new measurements they are preparing to run. She spent the whole time going through the details on how they planned to calibrate their detector and get the precision they need. Someone from the audience was asking questions in a very aggressive tone and at the end he said “I won’t believe any result from your experiment unless you prove to me that you will be able to calibrate your detector to x precision.” She was left silent. A female senior physicist came to her after the talk, praised her talk and advised her to ignore that aggressive man from the audience. Easier said than done. Nancy is shaken.

Thursday 4:00 p.m.
There is this senior physicist that does work relevant for my research. After his talk, I found the courage to approach him and asked him some questions. He said my questions were really good and suggested we continue the discussion in the hotel bar. It made me feel uncomfortable but I went along. The drinks came and he said: “Let’s take these up to my room.” I gracefully declined saying I needed to meet some of my friends soon. Honestly, I am so disappointed. I had so admired this man before he made me feel so unimportant as a scientist…

Thursday 6:00 p.m.
I came to my room early because I need to sleep. In the afternoon I overheard this woman physicist talking about the climate at DNP meetings to a couple of male colleagues. They looked pretty senior. The woman said she would like to consider ways on how to improve things. One man immediately responded saying that he has been a member of the DNP for almost three decades and never observed any inappropriate behavior of any kind at DNP meetings. The other confirmed that he had never witnessed any sort of racist or sexist behavior, only a high-degree of professionalism. Not sure what the woman answered but I was angered by these comments. These guys just don’t care about what others are experiencing…

Friday 8:30 a.m.
I went for breakfast at Starbucks in the hotel. I saw the senior physicist that gave one of the plenary talks on Wed and one of his colleagues. They both looked very accomplished and talked quite loud. One was complaining about the pressure to invite more women as speakers and the other agreed and said: “Specially because good ones are really hard to find.” I wondered whether they had seen my talk. Were they referring to me? Perhaps women speakers are more like tokens…

Friday 2:00 p.m.
Earlier, I was having lunch with Eric and Matt. We sat at a table with a few other students. At some point I went to the bathroom and started talking to this other woman from the conference. As we were coming back to the table, what appeared to be her colleague approached us and, before introducing himself, stared at my chest and said: “I am not looking at your boobs, I’m just trying to read your name-tag.” If he is not looking at my boobs, why does he need to make this comment about my anatomy?

Friday 11:00 p.m.
After the banquet I suggested to the people at our table that we go out and see a live band. I am NOT a dancer. I am quite simply pathologically bad at dancing. One of the physicists in the group insisted I dance with him and despite my many refusals, he finally said: “But you have to dance with one of us—you’re the only girl!” I felt so pressured that I only wanted to get away from there.

Saturday 10:00 a.m.
There was an issue with the projector so a group of us were standing outside the conference room waiting for the session to restart. One of the postdocs made strong political statements that presume only idiots would not accept his opinion. In our group, there were people from various countries, clearly with different worldviews than his. Shouldn’t he show more tolerance for the diversity of opinions in the group?

Saturday 12:00 p.m.
I don’t think my advisor is talking to me. I can never get hold of him in the conference. I texted and tried to call him several times, but there is no answer. For two days I have wanted to let him know how my talk went… Thank goodness the meeting is over: I feel exhausted.

We thank the many APS members who graciously shared their stories with us. Many represent a moment of pain or confusion, and a sense of not belonging to a community they hoped would be an important part of their lives. —DNP Ad Hoc Committee on Harassment Prevention: Ron Gilman (Rutgers University), Robert Janssens (University of North Carolina at Chapel Hill), Chair: Filomena Nunes (Michigan State University), Roxanne Springer (Duke University), Warren Rogers (Indiana Wesleyan University), and Sherry Yennello (Texas A&M University).