“Inside the horror of Nagasaki and Hiroshima lies the beauty of Einstein’s E=mc2,” novelist Jeanette Winterson observed in her 1997 novel, Gut Symmetries. That equation is indeed the underlying principle behind thermonuclear weapons and nuclear energy. It was a British and Irish physicist, John Cockcroft and Ernest Walton, respectively, who first split the atom to confirm Einstein’s theory.

Cockcroft was born in 1897 and served on the Western front during World War I. Afterward, he studied electrical engineering before winning a scholarship to Cambridge University, eventually becoming a research student in Ernest Rutherford’s Cavendish Laboratory. He earned his Ph.D. in 1925. Walton was born in 1903 into the family of a Methodist clergyman in Ireland, and won a scholarship to Trinity College, Dublin, to study math and science. After finishing his studies, he also went to work at the Cavendish lab, completing his Ph.D. in 1931. He stayed on as a researcher for another three years, teaming up with Cockcroft to experimentally study atomic structure.

Rutherford had successfully disintegrated nitrogen atoms with alpha particles in 1919, gleaning vital hints as to the structure of atomic nuclei. But a more powerful stream of projectiles would be needed to gather any further insight. Along with Mark Oliphant, Rutherford assigned Cockcroft and Walton to design the experimental equivalent of “a million volts in a soapbox.” They built the generator out of spare parts, wood and nails, and the machine was capable of 600,000 volts when they finished it. Not quite a million volts, but Cockcroft read a seminal paper by George Gamow and realized quantum tunneling would let them achieve the same effect with a lower voltage. They began bombarding lithium and beryllium targets with high-energy protons in March 1932. 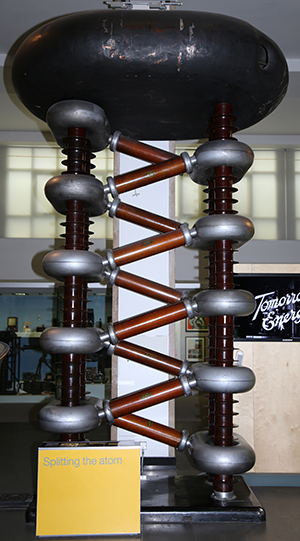 On April 14, 1932, Walton noticed the telltale signature of alpha particles after bombarding a lithium target: the lithium broke into two helium nuclei. Cockcroft and Rutherford confirmed this was the case. The three men penned a letter to Nature that same night announcing the first artificial disintegration of an atomic nucleus—the splitting of an atom—and the first nuclear transmutation of one element (lithium) into another (helium).

As a bonus, when they measured the total kinetic energy of the new helium nuclei, it was greater than the original hydrogen and lithium nuclei, with a corresponding loss in the total mass. As a result, they had also confirmed Einstein’s equation for the equivalence of mass and energy (E=mc2).

The team subsequently accomplished the same feat with carbon, nitrogen, and oxygen atoms, using protons, deuterons, and alpha particles to produce radioactive isotopes. For their efforts, they received the 1951 Nobel Prize in Physics. The citation praised their work as opening up “a new and fruitful field of research” that had “profoundly influenced the whole subsequent course of nuclear physics [and] stands out as a landmark in the history of science.” The release of energy was too gradual to be of much practical use. It was Hungarian physicist Leo Szilard who proposed that bombarding atomic nuclei with extra neutrons would make the atoms unstable and trigger a chain reaction to release energy much more quickly.

Despite their success, the accelerator Cockcroft and Walton built was not as good a design as the cyclotron developed by Ernest O. Lawrence in the US. Cockcroft convinced Rutherford to invest in a 36-inch cyclotron based on Lawrence’s design for the Cavendish Lab. It was soon up and running, and a second, larger cyclotron was under construction when World War II broke out and delayed its completion.

During the war, Cockcroft did research into radar, especially for shooting down enemy aircraft, and helped get an early warning radar system operational. He was also appointed to the committee charged with dealing with issues relating to the technical feasibility of an atomic bomb.

In 1944, Cockcroft was named director of the Montreal Laboratory, a new heavy-water nuclear reactor in Canada to manufacture plutonium and enriched uranium. Two years later he became director of the Atomic Energy Research Establishment (AERE) in the UK, overseeing the construction of various reactors. The first nuclear reactor in western Europe started up in August 1947 at AERE.

In the 1950s, a similar reactor design was implemented at the Windscale facility in northwest England for producing fissile material for atomic weapons. Cockcroft made one especially controversial decision in the construction of the Windscale plutonium production reactors: He insisted the chimney stacks be fitted with high performance filters. There had been a report of uranium oxide detected near the X-10 Graphite Reactor at the Oak Ridge, Tennessee facility, and Cockcroft wanted to guard against similar leakage.

It was a costly detail, since he made the decision late in the design process, resulting in a lumpy shape to the chimneys. And it turned out the Oak Ridge uranium oxide had come from the chemical plant, not the reactor. The filters were dubbed “Cockcroft’s folly,” since his colleagues didn’t think they were necessary. But Cockcroft’s excess of caution ultimately paid off: In 1957 a fire broke out at the Windscale facility, and one of the reactors caught fire. Thanks to the filters, no radioactive material escaped into the surrounding environment.

In 1959, Cockcroft became the first Master of Churchill College, Cambridge, which formally opened in 1964. He died of a heart attack at his Cambridge home in 1967. Walton had returned to Ireland in 1934 as a fellow of his alma mater, Trinity College, working on the phosphorescent effect in glasses, radiocarbon dating, and thin-film deposition on glass, among other interests. He died in 1995 at the age of 91 in Belfast.

Cathcart, Brian. The Fly in the Cathedral. New York: Penguin, 2005.