Climate change is a top concern among APS members who voted on the importance of six key issues highlighted by the Office of Government Affairs (OGA) during this year’s March Meeting in Boston.

For the past several years, OGA has featured an “issues board” during the meeting, providing APS members an opportunity to inform the staff of their science policy concerns. This year, the main issues were: laboratory and facility upgrades, visas and immigration, research funding, climate change, combating sexual harassment, and nuclear weapons and non-proliferation. A seventh category—“other issues”—enabled members to select matters not included among the main six. APS members could identify themselves as industry, government, post-doc, faculty, or student.

Climate change was the top overall vote-getter with 215 votes, followed by research funding (207), and visas and immigration (130). APS members also had an opportunity to send letters to Congress during the meeting about those issues. A total of 534 letters were sent to 60 Senate and 90 House offices. 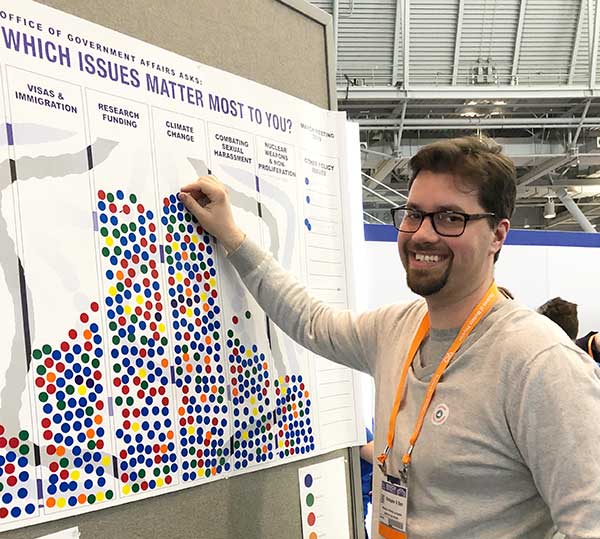 APS members were asked to rank issues of most concern.

APS members offered a variety of reasons about why they were concerned about the issues.

“I feel that it’s our job as scientists to communicate the importance of climate change,” said Kristopher Barr, a UCLA graduate student. “There’s a lot of misinformation about climate change, and we must be diligent about correcting these misunderstandings.”

Barr added that diversity within the STEM field is also a concern.

Diana Valverde Mendez, a Princeton University graduate student, said she was concerned about the effect of plastic pollution on the environment and stressed that more research is needed to address the issue.

“Plastic is in the deepest depths of our ocean, and that’s impacting wildlife and human health,” she said. Valverde Mendez said that robust, sustainable research funding would go a long way in helping to create better materials, alleviating the need for plastic.

Xiangyu Song, a graduate student at the University of Illinois, Urbana-Champaign, picked research funding as a key issue.

“You worry about whether funding will dry up, given the uncertainty surrounding it,” she said.

Another concern for Song: nuclear weapons. “I’m from China, and we have an unstable neighbor. Nuclear weapons should be well-controlled,” she opined.

America’s standing as a global technology leader has declined due to a decrease in research funding, said David Tomanek, physics professor at Michigan State University.

And isolation is not the answer to the problem, he added.

“It would keep us stuck where we are instead of putting us on a cutting-edge path,” Tomanek explained. Instead, being open to recruiting the best and brightest students from around the world would help solve the issue, he said.

Regarding climate change, APS is the first scientific society in the United States to broadly assess and publish its emissions. The Society has taken steps to provide members the opportunity to mitigate their carbon footprint by donating to an environmental organization of their choice—an initiative that stems directly from APS’s Greenhouse Gas Inventory report. For those without a preferred organization, APS suggests directing donations to the Clean Energy Trust, a nonprofit clean technology accelerator focused on bringing scientific and technological advances to the marketplace. Visit APS’s donation page at Clean Energy Trust.

APS members can visit OGA’s Advocacy Page to learn more about science policy issues and to contact their member of Congress.

“We want our members to know that we are a key resource for them to take action on the issues that matter most to them,” said Francis Slakey, APS Chief Government Affairs Officer.

The author is the Press Secretary in the APS Office of Government Affairs.