Note: This article—one of a new series—is reprinted from Physics Magazine.

On the coast of Vietnam, near the midpoint between north and south, sits Quy Nhon. In this city tucked within rolling hills, the locals go to the beach at the break of dawn before the streets fill up with the honking and puttering of motor scooters. It’s here too where many scientists come to relax and attend meetings on particle physics, cosmology, and biophysics at the International Center for Interdisciplinary Science and Education (ICISE). Bordered by sandy beaches and coconut trees, ICISE hosts roughly 20 conferences per year. In September, I went to ICISE to attend a conference at the 15th Rencontres du Vietnam and to learn about the development of physics research in the country. 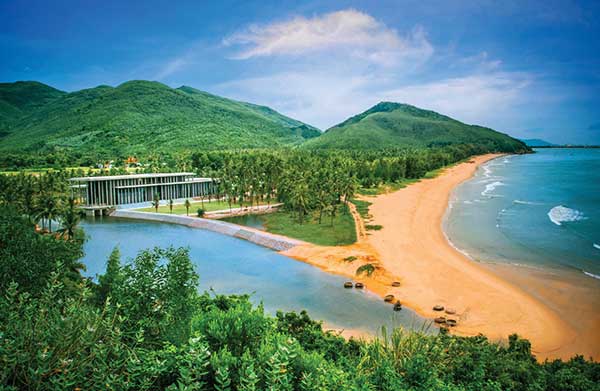 Aerial view of the conference center at ICISE.

Established in 2013, ICISE owes its existence to Vietnamese-born, French-trained physicist Jean Trần Thanh Vân, well-known for organizing the yearly Rencontres de Moriond, a premier particle physics conference in the Alps. ICISE has recently added a small research institute in particle physics and will soon have a science museum and planetarium. “We are at the beginning of a long and exciting adventure,” Trần Thanh Vân said in his opening remarks at the conference.

Physics in Vietnam is also at a new beginning, one might say. The country endured decades of wars and economic turmoil, but the last 30 years have seen a new direction. Following the breakup of the Soviet Union, the country opened itself to the West. Its GDP has been growing at an average clip of 5 percent annually over the last decade, twice as fast as the US GDP. There has also been an uptick in investment for research and development both by the government and by industry. All this bodes well for the Vietnamese physics community.

In the past, physics has been in the shadow of other scientific disciplines. “We have a long tradition here in mathematics,” Trần Thanh Vân explained to me. Well-respected mathematicians have come from Vietnam, including Fields-Medal winner Ngô Bảo Châu, and Vietnamese high school students perform well in international math competitions. By contrast, physics has lagged behind, in part because it’s easier for universities to support a math professor than a physics professor needing experimental facilities.

“According to my memory, physics began to develop in Vietnam in the year 1956 when the department of physics was established at Hanoi University,” said Nguyễn Văn Hiệu, who was the first director of Vietnam’s Institute of Physics (IOP). He told me that the government of Vietnam used to send many physics students to train in the Soviet Union and other socialist countries. When they came back, their main task was educating teachers, so these physicists had little time to conduct research.

However, in 1969, the Vietnamese government established the IOP—a national laboratory in the spirit of US national labs. “The quality of the research has gradually improved since then,” Nguyễn Văn Hiệu said. The IOP is one of two dozen institutes in the Vietnam Academy of Science and Technology (VAST), which has a large campus in the middle of Hanoi. I paid a visit to the IOP’s olive-colored building in a corner of the VAST campus and met with its director Đinh Văn Trung. He said that the Institute’s $1 million budget supports 150 staff members, around a third with PhDs. Most of the IOP scientists do theoretical research, collectively publishing around 100 papers per year in national and international journals.

One of the positive signs for the IOP and other physics institutions is the government’s Program of Development in the Field of Physics by 2025. This program (and a similar one for mathematics) singles out research sectors that can help accelerate the economic development of the country, said Nguyễn Văn Hiệu. With input from the physics community, the program has targeted top research priorities in theoretical and computational physics, condensed matter, quantum optics, and nuclear physics.

The program also places an emphasis on applied physics, such as materials science. Not far from IOP is the modern-looking building of the Institute of Materials Science (IMS), today the biggest institute at VAST, with 250 staff members, 23 research labs, 4 R&D centers, and 1 key laboratory that benefits from special government funding. With an annual budget of around $4 million, the institute has invested in a variety of high-tech equipment, such as electron microscopes and spectrometers and material fabrication systems, which it makes available to outside users.

I met with Trần Quốc Tiến, head of IMS’s optics and spectroscopy division, who presented the strategy behind the IMS research program. “From the beginning, we tried to fill a niche that meets the demands of both international collaborators and local researchers,” Trần Quốc Tiến said. He showcased some results of this strategy: basic research on quantum dots and carbon nanotubes as well as more applied investigations into renewable materials and anticorrosion strategies. He also talked about several international collaborations with laboratories in Europe and Southeast Asia as well as the US.

Collaborations with the West are a fairly new thing. After North and South Vietnam reunited in 1975, the country’s physicists mostly collaborated with the Soviet Union and other Eastern European countries. However, when the Berlin Wall came down in 1989, many of these connections faded away. Since the 1990s, Vietnamese society has shifted its focus toward the West. Representative of this change is the physics faculty at Vietnam National University (formally Hanoi University), where I spent an afternoon meeting professors and students. The academic program at VNU was originally modeled after a Soviet university, explained Ngạc An Bang, dean of the faculty of physics. But in 2009, the physics program changed to a more Western-like credit-based format, taking input from the department of physics at Brown University in Rhode Island.

With 750 students, VNU has the largest physics department in Vietnam, and the only one to be ranked by US News and World Report (#472 in the field of physics). More than half of its faculty was trained in North America, Europe, Japan, or South Korea. “Luckily we have the chance to study in the West,” Ngac An Bang said. The main research areas are theoretical physics, solid-state physics, materials science, nuclear physics, and particle physics.

The opportunities for graduates with a physics degree are still rather limited within Vietnam, admitted Đinh Văn Trung. “Many graduates end up going abroad,” he said. However, new developments in Vietnam may help to keep more students at home. In the past few years, several private universities have opened up, often with direct support from industry. Compared to public institutions, the pay for professors can be considerably higher at these private schools.

There are also new funding opportunities meant to boost home-grown research. The National Foundation for Science and Technology Development (NAFOSTED), similar to the National Science Foundation (NSF) of the US, “has been providing valuable financial support to Vietnamese scientists in multiple disciplines,” said Phan Mạnh Hưởng, who studied at VNU but is now a researcher at the University of South Florida. As an example of a local scientist benefiting from this support, he cited Lê Anh Tuấn, who received NAFOSTED grants for nanomaterial research and is now director of the Nano Institute at Phenikaa University, one of the private schools in Hanoi.

With future possibilities opening up, I was curious if there was anything in Vietnam’s past that might inspire more young people to choose physics. Several scientists mentioned to me the Temple of Literature in Hanoi, where the first university in Vietnam is located. That school, built in the 11th century, was open to anyone who worked hard and could pass the required tests. Touring the Temple on one of my last days in Vietnam, I was impressed by the stelae of doctors, in which stone turtles carry tablets with the names of past graduates: A reminder perhaps that the road to scholarly achievement can sometimes be slow, but the rewards can be long-lasting.

The author is a Corresponding Editor for Physics based in Lyon, France.