Millions of people fly around the world with no thought about how airplanes can remain aloft. We owe the theoretical foundation of some of the principles of flight—among other fundamental insights—in part to a Swiss mathematician who made seminal contributions in fluid mechanics as well as probability, statistics, and vibrating strings.

Born in Groningen in 1700, Daniel Bernoulli had a powerful mathematical pedigree: he was the son of a mathematician named Johann Bernoulli, one of eight gifted mathematicians and physicists in the legendary Bernoulli family. They were a virtual dynasty during this period. The family originally hailed from Belgium but fled to Switzerland to escape Catholic persecution of Protestants. There, the family patriarch, Nicolaus (Johann’s father, Daniel’s grandfather), made his fortune as a spice merchant.

Nicolaus had intended that Johann take over the family business. Alas, Johann failed miserably as an apprentice and opted to study medicine at Basel University instead. He and his older brother, Jakob, began collaborating on the study of a shiny new mathematical tool called calculus and were among the first to apply it to various problems. When Johann switched from medicine to math, it ignited a nasty sibling rivalry that rippled through the Bernoulli family for decades.

The two brothers were highly competitive, fought constantly, and always sought to outdo each other when it came to posing mathematical challenges. The fact that Jakob had trained his younger brother made it difficult for him to accept Johann as an equal. Johann, in turn, hated to be out-done. When Jakob died of tuberculosis, Johann assumed his professorship at Basel University. 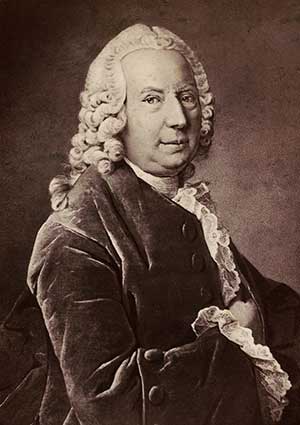 Daniel Bernoulli came from a family of gifted mathematicians and physicists.

Even though Johann had rebelled against his own father’s controlling behavior, that didn’t keep him from treating his son the same way, selecting the woman Daniel should marry and insisting he should become a merchant like his grandfather. Daniel had no interest, so Johann insisted he study medicine instead. But Daniel’s love and aptitude for mathematics did not subside, so eventually Johann relented and taught him the subject on the side.

After completing his studies, Daniel tried to get an academic position in anatomy or botany at Basel University, but these were typically decided by lottery, and he lost out both times. Italy beckoned for further medical training, and while there, Daniel invented a ship’s hourglass capable of operating even in rough weather, winning a prize from the French Academy for his design. And he kept up his mathematical work, too, publishing his first treatise on the subject in 1724. Mathematical Exercises contained some early thoughts on the problem of pressure, inspired in part by his medical studies.

Upon returning home, Daniel received an offer to teach mathematics at the Imperial Academy in St. Petersburg, Russia. His older brother, Nikolas, accompanied him and took a similar position, but died of tuberculosis the following year. Without his brother, Daniel was increasingly unhappy in St. Petersburg and sought to return home to Basel. Instead, his father sent one of his best students, Leonard Euler, to Russia so the two could collaborate. It proved a successful partnership, producing work on the movement of strings in musical instruments, probability, and economics.

Daniel also did his most groundbreaking work on hydrodynamics during this period. The English physician William Harvey—who was the first to observe that the human heart worked like a pump to force blood through the arteries so it could circulate through the body—encouraged Daniel to combine his love for mathematics with his medical training to discover the basic rules that govern the movement of fluids.

One day he conducted a pivotal experiment: he punctured the wall of a pipe filled with fluid with a small, open-ended straw. He noticed that the fluid would rise up the straw, and the degree to which it would do so was directly related to the fluid’s pressure in the pipe: the higher the pressure, the higher the fluid level would rise. His technique was soon adopted by physicians all over Europe, who used it to measure patients’ blood pressure by sticking pointy glass tubes into the arteries, until a less intrusive method was developed some 170 years later.

Bernoulli went one step further and applied this discovery to his earlier work on the conservation of energy. According to Newton’s laws of motion, a moving body exchanges kinetic energy for potential energy as it gains height. A similar phenomenon occurs with a moving fluid: it exchanges its kinetic energy for pressure. This is the Bernoulli Principle: the pressure of any fluid decreases where the speed of the fluid increases.

Daniel’s research on fluid behavior culminated in his most important treatise, Hydrodynamica, published in 1738 after he had finally come home to Basel. Daniel organized the book around the notion of conservation of energy and included discussions of water flowing through a tube and from a hole in a container. It explained hydrodynamic pressure and described various hydraulic machines. He also provided a foundation for the kinetic theory of gases, applying the concept as a means of illuminating Boyle’s law.

Despite Daniel’s success, or rather, because of it, his relationship with his father continued to worsen, coming to a head in 1734, when both Daniel and Johann submitted winning entries for the Paris Academy’s Grand Prize, and were jointly awarded the honor. A jealous Johann was furious, banning his son from his house—how dare the student be deemed the master’s equal!—oblivious to how his bad behavior mirrored his late brother’s jealousy of him.

Johann went so far as to publish his own book on hydrodynamics in 1739, one year after the work of his son, but deliberately predated it to 1732 in order to claim credit for Daniel’s work. Their relationship never recovered from the insult, and a dispirited Daniel never quite showed the same enthusiasm for his mathematical studies after the rift.

Yet Daniel continued to contribute to various different fields for the remainder of his life, such as the study of the oscillation of air in organ pipes. He was elected as a fellow of the Royal Society and won the Paris Academy’s Grand Prize nine more times. He died on March 17, 1782, his scientific legacy assured.