By Amory B. Lovins

Note: This article is adapted and excerpted from an invited talk by the author at the APS April Meeting in Denver in 2019 in a session organized by the APS Forum on Physics and Society (APS News, October 2019). The full presentation, with the slides to which the remarks refer, can be viewed on the APS YouTube channel.

Around 1975 our government and industry all said that the energy needed to make a dollar of gross domestic product (GDP) could never drop. A year later, I heretically suggested it could drop 72 percent in 50 years [1]. So far, it's dropped 58 percent in 43 years, but just the innovations already added by 2010 can save another threefold, or twice what I originally thought, at a third of the cost. Today that looks conservative because optimizing buildings, vehicles, and factories as whole systems—not as piles of parts—can often make very large energy savings cost less than small or no savings, turning diminishing returns into increasing returns.

Economic geologists know that a mineral's reserves—the identified deposits profitably extractable with current technology—are only a small part of the resource base. Most energy analysts also narrowly define reserves of energy efficiency like mineral resources, but the actual energy efficiency reserves are several-fold larger than those now typically recognized and captured.

The "missing majority" is hiding in plain view and is exploitable by integrative design, as I will describe. But this geological analogy breaks down on cost: orebodies are finite assemblages of atoms, while energy efficiency resources are infinitely expandable assemblages of ideas. Exploiting ideas depletes only stupidity, a very abundant resource. All of this is documented in a peer-reviewed paper [2] called "How Big is the Energy Efficiency Resource?"

The evidence across all sectors shows that unlike oil or copper, most new energy efficiency reserves cost less because they come not from adding more or fancier widgets but from using fewer and simpler widgets—more artfully chosen, combined, and timed and sequenced.

I'd never built a house before, so I didn't know what was impossible. My wife Judy and I live near Aspen, Colorado, at 2200 meters elevation. Temperatures there used to dip as low as minus 44 degrees Celsius. We saw up to 39 days of continuous midwinter cloud, but our house uses no combustion. (That's so 20th century.) Instead, we use superinsulation, ventilation, heat recovery, and superwindows that insulate like 16 or even 22 sheets of glass but look like two and cost less than three, making the house 99 percent passive solar heated and 1 percent active solar.

Eliminating the heating system more than paid up front for the efficiency that displaced the heating system, slightly reducing total construction costs and then saving also 90 percent of electricity and 99 percent of the water heating. It was all paid back in 10 months with 1983 technologies, which are not nearly as good or cheap as those we have now. 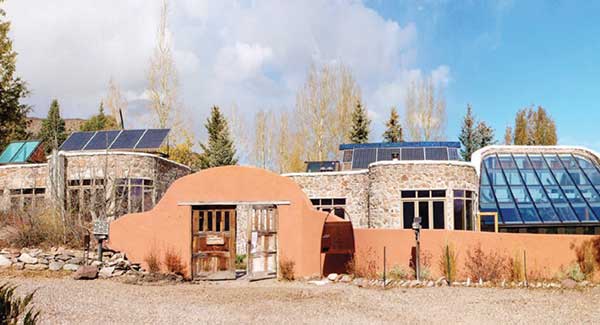 Integrative design in the author's residence in Colorado means that no combustion energy sources are needed for heating and cooling.

Our house helped inspire more than 160,000 European passive buildings that likewise have no heating and roughly normal construction costs. An analogous approach also works fine in Bangkok; practically everyone on earth lives in a climate somewhere between Bangkok and Old Snowmass, Colorado. Integrative design gives many benefits from each expenditure. For example, the arch that holds up the middle of my house has 12 different functions, but it has only one cost.

What about our biggest oil burner—automobiles? Well, the propulsion system or powertrain uses 4/5 of the fuel energy before it reaches the wheels, but our savings should start downstream, at the wheels. Here's why. Just a fifth of a modern car's fuel energy reaches the wheels and moves the car. Of that, nearly half heats the air that the car pushes aside (a loss that rises as the cube of speed). Most of the rest heats the tires and road. So only the last ~6 percent of the fuel energy accelerates the car and then heats the brakes when you stop. But 19/20 of the mass you're accelerating is the heavy steel car, not you. So just 1/20 of that 6 percent or about 0.3 percent of the fuel energy ultimately moves the driver. That’s not very gratifying after one and a third centuries of devoted engineering effort.

Both acceleration and rolling resistance depend on mass, which therefore causes most of the tractive load. Reducing losses in the powertrain is harder than reducing tractive load, and it's also less rewarding, because saving one unit of energy in the powertrain saves only one unit of fuel in the tank. But saving one unit of energy at the wheels avoids four or five more units now lost in getting that energy to the wheels. So we should first reduce tractive load, then improve the powertrain, which then shrinks for the same acceleration, saving more weight, and also saving capital cost to help pay for the lightweighting. This is integrative design.

Ultralight carbon-fiber autos can save far more oil than Saudi Arabia pumps and, with simpler designs, can be made at normal cost. How do we know that? Well, because BMW did it six years ago with the carbon-fiber electric car that I drive, the i3. The i3 reportedly made money from the first unit off the assembly line. Its carbon fiber is paid for by the smaller batteries that its lightness saves, and fewer batteries also means faster recharging. Its integrative design decreases mass a lot more than normally assumed. Its manufacturing is radically frugal, eliminating conventional body and paint shops, which are the two hardest and most costly steps in making a normal car. Making the i3 needs one-third the normal capital and water, and one-half the normal energy, space, and cost.

You can keep going around the design spiral, making components smaller as their structural loads shrink, because the less weight you have, the less weight you need. Lightness begets lightness. Many big parts then disappear. A good hybrid design, for example, can eliminate transmission, clutch, flywheel, driveshaft, U-joints, axles, differentials, starter, and alternator. That's nine things, each saving even more mass and then you go around the cycle some more and take out more mass.

At first it might seem like the special materials and powertrain and design may raise your manufacturing costs, but after more mass removal, you need less carbon fiber and powertrain. The advanced composite structures can get so much simpler that these savings pay for the carbon fiber, making the ultralighting roughly free, as BMW proved.

My team's latest ~$40 billion dollars of industrial retrofit designs typically found about 30 to 60 percent energy savings, paying back in a few years on retrofits. And then in newbuilds, we find savings of typically 40 to 90 percent with generally lower than normal capital costs. These results come largely from rethinking industrial processes and redesigning basic elements like pump, fan, and motor systems.

For example, in both buildings and industry, better pipe and duct design can save about 80 or 90 percent of the flow friction. And if everybody did this, it could save roughly half the world's coal-fired electricity, typically paying back in less than a year in industrial retrofits and instantly in newbuilds. But this is not yet in any official study or industry forecast or climate model or government assessment, because it's not a technology; it's a design method. And most people don't yet think of design as a scaling vector—a way to make things big, fast.

Better pipe and pump design (eg, use large pipes with gentle curves and small pumps, rather than sharply bent small pipes and large pumps) can reduce flow friction by 80-90%.

And the methods are simple—it's just physics. Use big pipes and small pumps, not small pipes and big pumps. Friction drops as nearly the fifth power of diameter. Yet in practically every new building or factory, the piping is normally laid out so the flow always goes through right-angle elbows—friction. But why not lay it out so that the main flow has no bends and fewer valves? The only obstacle is force of habit. We should bend minds, not pipes.

What do such savings mean for the motors that use over half the world's electricity? From the fuel burned in the power plant to the end use, there are so many compounding losses that only a tenth of the fuel energy comes out the pipe as flow. But every unit of lower friction you save at the pipe leverages back to 10 units of fuel cost, emissions, and global warming saved at the power plant. And as you go back upstream, the components get smaller and cheaper, so the total capital cost goes down. If you know an engineering textbook that mentions this "start downstream" principle, I would love to see it.

What can integrative design do for a big economy? Well, seven years ago our business and design synthesis, Reinventing Fire [3], rigorously showed how to triple US energy efficiency and quintuple renewables by 2050 needing no oil or coal or nuclear energy and at least a third less natural gas, while saving 5 trillion, growing the economy 2.6-fold, strengthening national security, and cutting fossil carbon emissions 82 to 86 percent. This needed no new inventions nor Acts of Congress, but instead, with smart city and state policies, could be led by business for profit. The first eight years of this 40-year journey are nicely on track, because the private sector smells the 5 trillion on the table.

That's exactly what should be happening. I hope these examples will encourage you to rethink why our end-use efficiency is so far from Second Law limits—and how better design, not only better technology, can help close that gap if we turn integrative design from rare to common.

The author is Cofounder and Chairman Emeritus of Rocky Mountain Institute (rmi.org).