In late 2018, astronomers started observing something weird about Jupiter’s famous Great Red Spot: It appeared as if large red flakes were being ripped off the planetary feature, leading to predictions that it would disappear within the coming decades.

Philip Marcus from the University of California, Berkeley, hopes to reassure worried fans of the Great Red Spot with research he presented at the 2019 Division of Fluid Dynamics Meeting in Seattle, Washington. Work done in his lab shows that beneath the swirling red clouds, the vortex that powers the Great Red Spot is still going strong and that the observed flaking was a result of interactions with smaller vortices.

Most of the images that astronomers, both professional and amateur, were viewing during the flaking phenomenon actually show the cloud layer on top of the Great Red Spot, and according to Marcus, the clouds don’t always give an accurate description of the vortex below. Using high resolution imaging and computer analysis, Marcus and his team were able to measure what’s happening to the vortex underneath the cloud layer.

“We determined the actual boundary of the underlying vortex, which is the machine that drives the red spot, and it’s not completely correlated with the clouds,” said Marcus in a press conference. “It’s not at all clear that the shrinking of one has to do with the shrinking of the other: you can’t just conclude that if the cloud is getting smaller that the underlying vortex is getting smaller.” 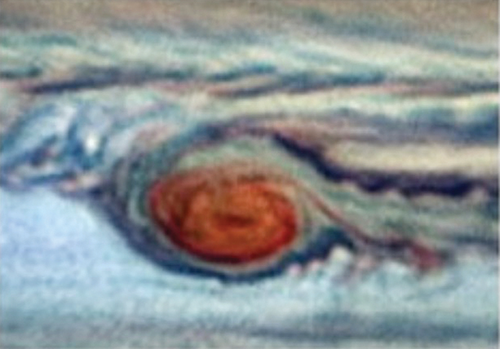 A (false color) image showing the flaking of red clouds from the Great Red Spot in the spring of 2019.

The mismatch of clouds and vortex is possibly what started the worry about the Great Red Spot in the first place: the small vortices that interacted with the red spot don’t always have their own clouds, allowing them to attract less attention from astronomers as they move across the planet, until they moved too close to the Great Red Spot. The spot is a high-pressure system that turns in the opposite direction of the planet, making it an anti-cyclone. Jupiter has other storms that are also anti-cyclones, but low-pressure cyclones that turn in the direction of the planet also exist—they just don’t reliably produce clouds announcing their presence. The existence of invisible non-cloud producing cyclones can be inferred when they come close to an anti-cyclone, causing the visible anti-cyclone to act differently.

According to Marcus, the observation of the Great Red Spot flaking was simply a result of the strong anti-cyclone interacting with both a smaller anti-cyclone and a cyclone.

“There are two phenomena that I believe led to the observation last spring of these flaking events, and one of them is mergers,” said Marcus. “Anti-cyclones attract each other, while anti-cyclones and cyclones repel each other. It’s like the opposite of electric charges.”

When two anti-cyclones interact, the smaller of the two will be absorbed by the other, but the merger isn’t instantaneous: a visible bulge in the boundary of the anti-cyclone’s clouds can be seen until it is fully absorbed. In the case of anti-cyclones and cyclones, as the outer boundaries of their vortices interact, it creates what’s called a stagnation point. Typically this causes an anti-cyclone to be observed as slightly altering its East-West path across Jupiter by moving slightly up or down longitudinally as it avoids the stagnation point.

“Many mergers occur, it's a perfectly normal thing: They were first seen by Voyager in 1979, and they've been seen very frequently after that. When the red spot digests other clouds associated with the other anti-cyclones, the clouds don't immediately get digested,” said Marcus. “We know for sure that, about every 10 years, a cyclone meets a visible anti-cyclone. They get these stagnation points. When we have two of them together, which happened last spring, it produces these blades. Both of these are very normal healthy activities for a red spot and its colleagues, so we do not believe at Berkeley that the red spot is dying.”