Putting the Flu in Fluid Dynamics: Tracking the Transmission of Airborne Disease Particles

During the peak of flu season, many people find themselves being wary of their coughing co-workers or sniffling students, but airborne diseases, like cold and flu viruses, can sometimes travel far beyond a sick colleague’s desk.

At the 2019 Division of Fluid Dynamics meeting in November, Sima Asadi from the University of California Davis presented research on tracking what activities cause a sick person to expel the most virus-laden droplets and modeling how these particles can spread in an indoor environment. Asadi’s research, done as part of a partnership between the University of California Davis and the Icahn School of Medicine at Mount Sinai in New York, shows the disease-spreading potential of speaking loudly and provides a model for the spread of disease-carrying aerosol particles at various distances.

Coughing and sneezing are the two most obvious behaviors people think of when it comes to the spread of airborne diseases, since both give off large, easily visible droplets and a large number of microscopic particles—and both can carry pathogens. However, simply breathing and speaking can give off tiny particles capable of carrying infection, too. And since breathing and speaking can happen continuously, versus coughing and sneezing which happen more infrequently, it’s possible these activities have a higher probability of disease transmission. Previous studies of infectious disease transmission have identified talking as a notable particle emission mechanism but did not account for differences in speech volume.

“[Other studies involved] counting from one to 100 and saying ‘okay, we observed this much of a particle, so talking is important,’ But we did a more controlled measurement: we controlled for the loudness of speech,” said Asadi. “We performed more diverse activities and more importantly in our results, what we reported was the particle emission rate. We basically concluded that, whatever you say, if you speak louder, you will release more aerosol particles.” 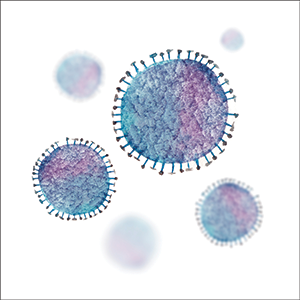 In addition to finding that speaking louder emits more particles, Asadi’s research identified a subset of people who emit more particles while speaking in general, called “speech superemitters.” This group consistently produced an order of magnitude more aerosol particles while speaking than their counterparts in the study, even after months had passed. Asadi’s group is currently unable to say why certain people are so-called superemitters—age, gender, weight, and lung capacity don’t seem to be factors—but knowing this subset of people exists could play a role in other disease transmission research.

After establishing volume of speech as a parameter for aerosol emission and disease transmission, the next step for Asadi’s research group was to use this data while examining the role of distance: what is the likelihood that someone in an enclosed space, like a classroom or an airplane, gets others sick through airborne particles?

Classical modeling of disease transmission has made use of what is known as the Wells-Riley model, which assumes all air in a room is perfectly mixed—meaning the aerosol particles are assumed to be part of that mixture. This fails to account for both time and location in the room, which limits the model’s usefulness for short-term exposure and close proximity to a disease’s source. To see how emitted aerosols might travel, Asadi employed a transient eddy model, which more accurately captures dispersion in indoor environments.

Higher concentration of droplets will typically translate to a higher pathogen load, and thus a higher probability of contracting an infection. In her talk, Asadi shared a sample probability created from the transient eddy diffusion model: Assuming a source is in the center of a four meter by four meter room and speaking for 60 minutes, people one meter away from the speaker have a ten percent probability of contracting the disease.

Using data from different expiratory activities like breathing or speaking at different volumes, Asadi’s model shows breathing presents the lowest probability of disease transmission, with speaking loudly and coughing carrying the same probability. But since talking can happen continuously, “it can be even more dangerous than coughing,” said Asadi.

This model for probability of disease transmission can be modified to fit a myriad of situations and groups of people performing a variety of expiratory activities, provided they’re in an indoor space.

“It's just a matter of the correct parameters that we use. The data that we currently have for particle emission rate is for people from 18 to 45, but if we have data available for children we can definitely apply it in our model,” said Asadi. “We can consider other cases—there can be more than one person if you are in a bigger environment or in a hospital—we can cover all of this.”

So, during this flu season, in addition to washing your hands regularly, you might do you yourself and your colleagues a favor—talk softly and carry a big box of tissues.