Partnering with APS Members in 2019 to Advance the Scientific Enterprise

The APS Office of Government Affairs (APS OGA) worked with Society members throughout 2019 to successfully advocate for physics and physicists and to amplify their voices for science. APS OGA facilitated more than 2,500 APS member contacts through op-ed placements, congressional letters, and both local and DC visits with congressional offices from key states and districts to advance the interests of the physics community.

“APS OGA is thrilled to have worked again this year with APS members who were eager to do their part to make a difference in science policy initiatives that impact the physics community,” said APS Chief Government Affairs Officer Francis Slakey.

Throughout 2019, APS OGA surveyed APS members at meetings to determine the issues that concerned the physics community, and APS OGA developed strategies to respond to those needs.

Federal Research Funding: In an ongoing effort to achieve sustained and robust support for federal science agencies, APS OGA worked with APS members and coordinated with other science and technology organizations to advocate for increased federal funding for science. For instance, APS member Dany Waller, a student at the University of Kentucky, wrote a piece in the Courier-Journal newspaper, urging US Senator Mitch McConnell to work with his colleagues to raise the budgetary caps impacting funding for key science agencies. Additionally, other APS members sent letters and participated in meetings to advocate for the funding increases. The result: Deep cuts to the science budget that were proposed by the Trump Administration were reversed by Congress. The Department of Energy’s Office of Science received a 5 percent increase for fiscal year 2019, bringing its total budget to 6.59 billion, according to a budget summary compiled by the American Institute of Physics. The National Science Foundation’s budget jumped 4 percent, resulting in a total budget of 8.1 billion. And the National Institute of Standards and Technology’s Scientific and Technical Research and Services account—which supports NIST laboratories, user facilities and grant programs—remained steady at $725 million. 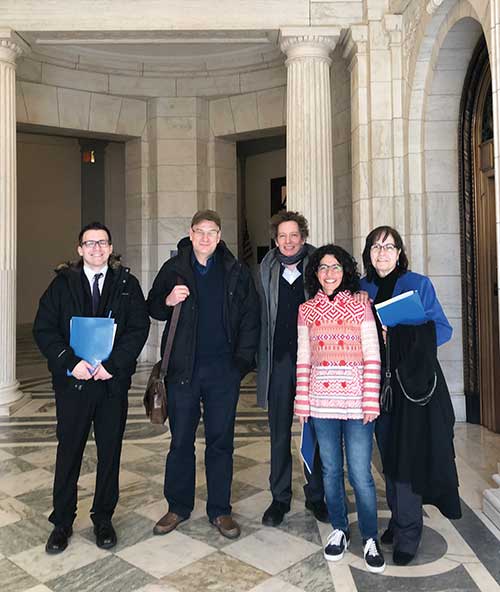 Visas & Immigration: Alerted by Society members, APS OGA partnered with physics department chairs to address concerns about declining enrollment in graduate physics programs. A follow-up survey indicated a significant drop in international applications to physics PhD programs across the country and provided a policy roadmap for reversing the decline. Another survey, carried out by the Society in conjunction with the Forum on Graduate Student Affairs (FGSA) and the Forum for Early Career Scientists, examined the challenges international students are experiencing while their visas to study in the United States are processed. To address these issues, APS OGA, with guidance from APS’s Physics Policy Committee, is leading efforts to garner support for two key policy proposals: (1) making the F-1 visa “dual intent” and (2) providing a path to a green card for students who earn advanced STEM degrees from US institutions and secure job offers from US employers. APS OGA worked with both the Senate and the House to have legislation introduced—the “Keep STEM Talent Act”—that implements both APS policy proposals. APS’s government affairs team worked with APS members to write op-eds and participate in in-state and DC meetings with staffers representing members of Congress. Teams of APS members in Iowa, North Carolina, and Utah met with congressional staffers to highlight the issue. APS member Amber Lauer, who participated in a meeting with US Senator Thom Tillis’s office and who is a postdoctoral research associate at Duke University, wrote an op-ed in the Raleigh News & Observer, urging Tillis to co-sponsor the Keep STEM Talent Act. APS member Noah Finkelstein did his part in the effort by writing a piece for the Colorado Springs Gazette, asking US Senator Cory Gardner to support legislation that would “make the F-1 student visa ‘dual intent’ and provide a path to citizenship for international STEM graduate students.”

Combating Sexual Harassment in STEM: Within seven months, the Combating Sexual Harassment in Science Act of 2019 went from being introduced in the House—timed with the APS Congressional Visits Day in January—to passing the full chamber in July. FGSA and APS OGA contributed to the outcome by partnering with APS members across the country to contact congressional representatives about the legislation. “The passage of the House bill is a success on a path that requires continued attention and measures to reach a level of zero percent of individuals being harassed,” said FGSA Chair Tiffany Nichols, a PhD student at Harvard University. APS members also held local meetings on this issue in several key states, most notably with the staff of US Senator Lamar Alexander, chair of the Senate Health, Education, Labor & Pensions Committee, which now has jurisdiction over the bill.

Climate Change: Climate change continued to be a top concern among six key issues voted on by APS members during the March, April, and DAMOP Meetings. In response to members’ concerns, APS submitted a public comment opposing the EPA’s proposed policy amendments to curtail regulation of greenhouse gas emissions (see p. 4). APS urged the EPA to instead carry out a rigorous assessment of methane emissions—a major contributor to climate change. Recent scientific results indicate that the negative environmental impact of methane is significantly higher than previously estimated. APS members were encouraged to submit their own comments on the proposed amendments before the EPA November 25 deadline. This will be a substantial advocacy issue for APS throughout 2020.

Helium: APS continued to advocate for solutions to the helium issues academics are facing by working with APS members on a key op-ed in The New York Times and through in-state and DC office visits with staffers representing members of Congress. APS member Joseph DiVerdi, a chemistry professor at Colorado State University, authored the piece in the Times, underscoring two crucial recommendations in APS’s helium report. He wrote: “Congress should enact legislation that keeps the federal reserve past 2021, while serving only projects funded by the federal government (after all, the reserve is paid for with tax dollars). It should create an extensive helium recycling program modeled on the modest and successful program run by the National Science Foundation.” In addition, APS has formed teams across the country, including in Arizona, Indiana, and Colorado, to advocate in their local offices on this important issue. In a related item, APS member Sophia Hayes, a chemistry professor at the University of Washington in St. Louis and a member of the APS-ACS-MRS Liquid Helium Report Committee, highlighted the need to enact APS’s proposed helium policies by serving as a witness during a critical minerals hearing sponsored the House Science Committee.

The author is the Senior Press Secretary in the APS Office of Government Affairs.