Each year, around 2,000 undergraduate women in physics make their way to one of the many regional locations for the annual Conferences for Undergraduate Women in Physics (CUWiP). CUWiP began as a grassroots effort, launched by the University of Southern California in 2006, growing to six conference sites. In 2012, APS became an institutional home for CUWiP, providing support for a growing number of conference sites: from January 17 to 19 this year, 13 sites across the country will host women seeking undergraduate physics degrees.

“Almost everyone who has a physics degree and is a woman will attend one of our CUWiPs. About 2,000 women each year are pursuing physics degrees and [we have] about 2,000 attendees each year,” says Renee Michelle Goertzen, Senior Program Manager at APS. “We have a national reach.” 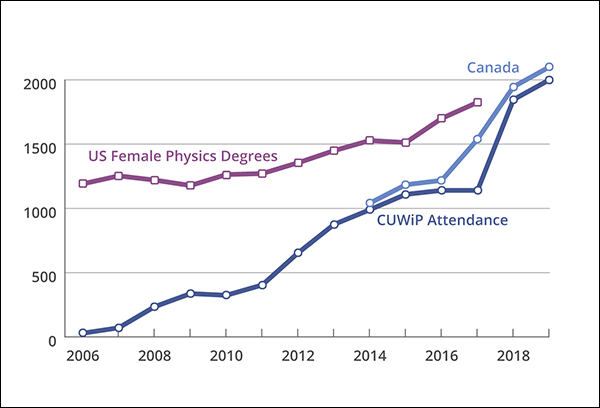 The number of women graduating each year with undergraduate physics degrees in the US is nearly equal to the yearly attendance at CUWiP conferences.

CUWiP indeed has a large presence, with twelve sites in the United States and one in Canada, providing geographic ease of access for many of the attendees. These conferences are also remarkably diverse, drawing in underrepresented minorities in physics. The percentage of students who are Hispanic, Black, or Native American and attend CUWiP is high compared with the number of physics degrees awarded. For example, Hispanic students make up 10 percent of awarded bachelor’s degrees in physics and account for 22 percent of the 2019 CUWiP attendees.

“CUWiP is doing very well at attracting students from underrepresented groups, which is important because these are people who are coming from groups where they are probably less likely to see someone like themselves who is a physicist,” says Goertzen. “It is extra important that they come to these conferences, meet other people who look and act and have interests like them so that they can say ‘Oh, I could be a physicist!’”

Before and after each conference, attendees are surveyed by a team of physics education researchers on a number of areas, from knowledge about what they can do with a physics degree to measurements of persistence—the likelihood they stay in physics. Persistence is tied to a number of indicators, such as a sense of belonging in physics, identifying as a physicist, having others recognize you as a physicist, and being part of a physics community. After CUWiP, all attendee groups showed gains in persistence indicators, with women of color showing the largest gains on average.

Each CUWiP site’s local organizers have the freedom to set their own conference agendas in order to meet the needs of student attendees, with guidance from APS to ensure the site includes all the components of a successful conference. Allowing sites to come up with their own unique conference often results in new ideas for reaching women in physics.

“Probably my favorite site last year was New Jersey, because they did something a little different: They had a pre-CUWiP for high school students for a couple of hours,” says Kai Wright, Senior Coordinator at APS. “Most high school students have an interest in physics, and some of them don’t have access to a physics department. This was just a brief introduction about what physics can be like if they major in it.”

Surveys are conducted across all CUWiP sites each year, and since all sites have slightly different programs, the results allow organizers to examine different tactics for creating the best possible conference. Occasionally this means working with speakers to make sure students receive the right messages about how to succeed in physics, but one of the largest changes to CUWiP as a result of these surveys is the creation of dedicated networking time at all CUWiP sites.

“Our evaluators have stressed the importance of networking time. When you organize a big conference, it’s easy to think ‘I want them to hear this talk,’ but you grow your community connections by having lunch breaks and coffee breaks and workshops where you can talk to other people,” says Goertzen. “It’s really important that [students] walk out of here knowing more people.”

Through networking and other events, the ultimate goals of CUWiP are to give undergraduate women in physics the opportunity to experience a professional conference, learn information on graduate schools and professions in physics, and gain access to a community of women in physics. The purpose of CUWiP, Goertzen emphasized, isn’t necessarily to promote advanced degrees in physics.

“The goal of CUWiP is to get students to complete their undergraduate degree and go on to postgraduate options that are physics related. That could be a PhD or a master’s, but it could also be working in R&D or working in a lab, or high school teaching,” says Goertzen. “I want [undergraduate women in physics] to graduate with a degree and to think they can use physics in their future and to know that there are many options.”

CUWiP also strives to build community among women in physics, especially for those who come from smaller physics departments without a strong network of mentors or role models.

“Smaller schools and departments may only have one to two female students in physics, and they may not feel like they’re included [in the physics community]. CUWiP shows them that there are more than just these two people in your department,” says Wright. “CUWiP shows students that they’re not alone in the undergraduate community.”