Shedding Light on the Dark: Public Lecture by Katherine Freese

This year's April Meeting in Denver featured a talk by Katherine Freese, the 2019 APS Julius Edgar Lilienfeld Prize Recipient, on the “cosmic cocktail” of the universe, including matter seen and unseen. In a lecture pitched for a general audience—many of whom were from the local community—Freese discussed the hunt for dark matter, evidence for its existence, and how science is trying to get a handle on what it actually is.

Freese started her lecture by walking through the past 100 years of efforts to understand the universe. Starting with Einstein’s work on relativity and progressing to the discovery of dark matter and dark energy, Freese painted a colorful picture of unknown particles and unusual phenomena. Among these are the gravitational lensing effects described in Einstein’s general theory of relativity. She showed a deceptively simple set of expressions known as the Einstein field equations, which describe the geometry of spacetime as shaped by matter. Freese explained in layman’s terms how spacetime warps in the presence of matter, showing two-dimensional representations of this effect. 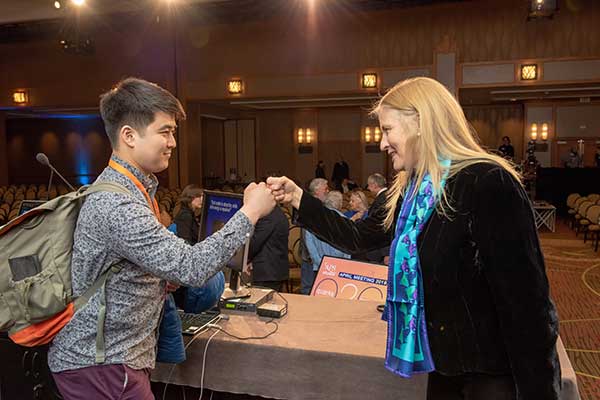 Katherine Freese meets the audience after her public lecture on the "cosmic cocktail."

But we know now that matter is not simply what we only directly observe. So where did the idea of dark matter come from? Cosmologist Fritz Zwicky, sought to solve the mystery of why the galaxies in the Coma cluster were moving too rapidly. While there was clearly a gravitational effect, whatever substance was lending the extra force did not produce light. They proposed the idea of dark matter (which Zwicky called "dunkel Materie"), calling it dark simply because it did not shine.

Freese then took the audience through the evidence that dark matter exists. The one thing known about dark matter is that it has gravity. One instance of dark matter interacting with other massive objects is in the fringes of galaxies. The further from the core of a galaxy, the slower the rotational velocity should be. However, the rotational velocity continues to stay the same, even at the very edges of galaxies, implying the existence of a large halo of unseen matter.

Although we know it is there, we still don't know what dark matter actually is. There are many possible candidates, from sterile neutrinos to WIMP-zillas. Rather than go through them all, Freese started with what dark matter is not. For example, it is not black holes or neutrinos. Supermassive black holes are found in the centers of galaxies but there are not enough of them to constitute the significant part of the universe that is dark matter. Neutrinos are simply too light for them to provide the mass missing from the visible universe. In computer models neutrinos cause a kind of simulated galaxy formation that does not align with current observations.

The two most likely candidates according to recent research are axions and weakly interacting massive particles (WIMPS). WIMPS are theorized to interact gravitationally but also through the weak force, meaning they could be detected through certain kinds of interactions with other particles. Freese detailed the characteristics of WIMPS and the many experiments designed to find them.

Freese described some current and future detectors for WIMPS. Among these was a DNA detector, consisting of a plate of gold with strands of DNA hanging down from it. The idea is that WIMPS passing through would sever the DNA strands where they hit. The direction could be inferred from the breaks in the strands. Another experiment she noted was IceCube at the south pole consisting of a large array of detectors embedded in the 2 kilometer thick ice.

Freese’s discussion on the state of dark matter stimulated curiosity and many questions. The talk concluded with some astute questions from the audience. One youngster asked, “What caused the Big Bang?” Freese’s answer: “We don’t know. The Big Bang is the limit of our knowledge," adding that this question is “for your future” generation to solve.

A video of the public lecture is available at the APS Physics YouTube channel.

The author is a freelance writer based in Goodland, KS.