Medieval and Renaissance cosmology was dominated by the notion of a celestial “music of the spheres.” It was a compelling metaphor that inspired much of the art, music, and literature of Western Europe for centuries. But astronomer Johannes Kepler laid out a more literal music of the spheres in his 1619 treatise, Harmonices Mundi (The Harmony of the World), suggesting that the planets of the solar system produced tones as they orbited the sun.

Born on December 27, 1571, just west of modern Stuttgart, Germany, Kepler’s father eked out a living as a mercenary and abandoned the family when young Johannes was just five years old. It was a spectacular fall in fortunes, since his grandfather had been Lord Mayor of the town. Kepler’s mother was an innkeeper and an herbalist (a practice that caused her to be accused of witchcraft some years later). Johannes was a sickly child, but he excelled at math, and came to love astronomy at a very young age. When he was six, his mother took him to see the Great Comet of 1577, and he later vividly recalled his first lunar eclipse at age nine, in which the moon “appeared quite red.”

He contracted smallpox, which left him with poor vision and crippled hands, dashing his hopes of being a practicing (observational) astronomer when he left home to attend the University of. Tübingen. But his mathematical skills served him well with regard to the theory behind the stars. He learned both the Ptolemaic and Copernican cosmologies at school, and championed the latter. Although he had originally intended on entering the ministry, he became a math and astronomy teacher at a school in Graz upon completing his studies.

While in Graz, Kepler experienced an epiphany about a possible geometric basis of the universe, inspired by the periodic conjunction of Saturn and Jupiter. He created a model in which each of the five Platonic solids was encased inside a sphere; if one then nested them within each other, the resulting six layers would correspond to the six known planets at the time (Mercury, Venus, Earth, Mars, Jupiter, and Saturn). He published these conclusions in his first astronomy treatise, Mysterium Cosmographicum, in 1596, when he was just 25.

While the treatise had its flaws, it brought Kepler to the attention of leading astronomers, including Tycho Brahe and Reimarus Ursus. Brahe and Kepler exchanged many letters, in which the former offered some harsh criticisms of the young astronomer’s work, including the fact that Kepler had relied on inaccurate data gathered by Copernicus. In 1600, Kepler visited Brahe near Prague, as a new observatory was being built, and gradually earned the latter’s trust, gaining access to Brahe’s far better data. He ended up moving to Prague, and when Brahe died, Kepler succeeded him as imperial mathematician.

Around this time, Kepler also became interested in studying numerological relationships between math, music, and the physical world, again drawing on geometry for his ideas. He believed geometry “provided the Creator with the model for decorating the whole world,” and wished to express those proportions in musical terms, like Ptolemy in Harmonica—a “music of the spheres” for the Copernican system. (Kepler’s contemporary, Robert Fludd, also developed a harmonic theory around this time, and the two fought bitterly over it.)

The greatest and least distances between a planet and the Sun did not follow harmonic ratios, but Kepler reasoned that the points where the planet moved fastest (“converging motion”) and slowest (“diverging motion”) were probably a more suitable analogue to harmonic vibration. 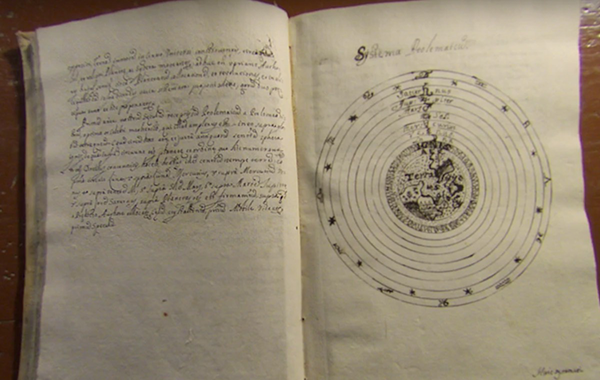 A page from Kepler's Harmonices Mundi

So, for example, the difference between Saturn’s maximum and minimum angular speeds fit a 4:5 ratio, corresponding to a major third, while Jupiter produced a 5:6 ratio, or minor third. Mars was 2:3, Venus was 24:25, and Earth was 15:16. “The Earth sings Mi, Fa, Mi,” Kepler explained as the reason for this small harmonic range. “You may infer even from the syllables that in this our home misery [Mi] and famine [Fa] hold sway.” Kepler proposed that very rarely, the planets would sing together in perfect harmony, suggesting this may have occurred at the moment of the universe’s creation.

The ratios for the diverging and converging motions of Mars and Jupiter was the only intervals that didn’t fit the harmonic pattern, resulting in a dissonant 18:19 ratio. (The asteroid belt was not discovered until 1801, so was not factored into Kepler’s calculations.) Nonetheless, this work became the basis for Kepler’s Harmonices Mundi, published in 1619. The tome’s fifth and final section described his discovery of the harmonic motions of the planets.

Ultimately this became Kepler’s Third Law, describing the distance relationship between the planets’ respective orbital periods and their distance from the Sun. It is typically defined as “the square of the orbital period of a planet is directly proportional to the cube of the semi-major axis of its orbit.” (Kepler had described the first and second laws in a previous book, Astronomia Nova.) In the 1660s, Kepler’s Third Law (along with Christiaan Huygens’ law of centrifugal force) helped Isaac Newton and Edmund Halley demonstrate the inverse square law of gravitational attraction between the Sun and its planets.