The Hunt For the Elusive Majorana Qubit

2018 APS March Meeting, Los Angeles—It’s a tale oft told in physics: researchers are, yet again, excited about a phenomenon that may or may not exist. This time, it’s Majorana fermions—weird objects that act as their own antiparticles. Some condensed matter physicists think they’ve seen these elusive beasts, but others aren’t so sure. Either way, Microsoft has put out a bounty for the Majoranas and hopes one day to harness them for quantum computing.

While particle physicists also study a version of the Majorana fermion (neutrinos might be of this ilk), the ones of interest to quantum computing are quasiparticles—many electrons acting collectively in materials to mimic particles. In 2012, researchers at the Delft University of Technology in the Netherlands first reported experimental evidence of the quasiparticle in a semiconductor nanowire attached to a superconductor. Subsequent measurements by several other research groups also match theoretical predictions, although it is still possible that the signals could come from some other interaction in the nanowire. 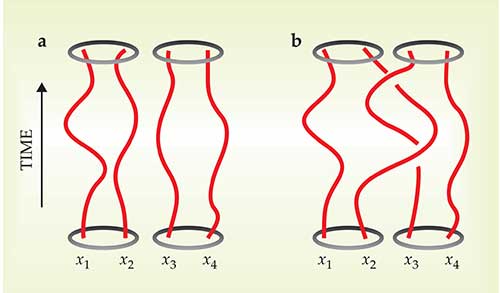 Trajectories of Majorana quasiparticles can be arranged to be topologically distinct and might form the basis for robust qubits in quantum computing.

Because of these tantalizing experimental results, researchers think that someone will conclusively nail down the quasiparticle soon. "It looks like a dog, and it walks like a dog," says Mihir Pendharkar, a Microsoft-funded graduate student at the University of California, Santa Barbara (UCSB), who presented his research at the 2018 March Meeting. But still, he adds, it might not be a dog.

Quantum computing researchers want to use a specific kind of Majorana fermion, known as a Majorana zero mode, as a qubit. "In classical terms, a Majorana zero mode is like half an electron," says Pendharkar. Theory, along with supporting experiments, suggests that these half-electron quasiparticles can exist at the ends of one-dimensional semiconducting wires that are attached to a superconductor.

One predicted property of these quasiparticles is that they have a "memory" of how they’ve been moved around. For example, if you swap two quasiparticles’ positions on a nanowire, "they would remember whether they had been moved clockwise or counterclockwise around each other," says Pendharkar.

You can store information in a pair of quasiparticles by exploiting this property, says Christina Knapp, a graduate student at UCSB who also presented in the same session. For example, in a simplistic encoding scheme, moving one quasiparticle clockwise with respect to the other could correspond to a 1, while moving counterclockwise could correspond to a 0. To read out the qubit, in principle, you would collide the two half-electron quasiparticles together on the nanowire and measure the outcome, which would yield a different signal depending on whether they were in a 0, 1, or a superposition state.

Researchers predict that these quasiparticles will be more robust at holding information than the qubits that Google and IBM are currently building. The latter are error-prone because of "local" noise, such as ambient electromagnetic fields. Consequently, thousands of superconducting qubits are required to lower the error rate enough to perform a logical operation. Google, the current record-holder, has put only 72 of these qubits together. This constrains researchers to design algorithms that are still useful despite inevitable errors.

Unlike Google’s computer, which stores information in a single localized object, a Majorana-based qubit would encode a single bit of information in multiple quasiparticles. According to theory, this type of quantum information should be much less likely to go bad. The quasiparticle still "remembers" whether it has been moved clockwise or counterclockwise with respect to its twin, even if you move it around on a nanowire. The information is also immune to local environmental noise.

The researchers liken these qubits to a knot on a shoestring, so that how the knot is tied indicates the information stored. "The knot doesn’t really change if you tug at the part of the shoestring," says Knapp. "It doesn’t care about little changes in the system."

Theorists have already begun designing solid-state qubits using the hypothesized quasiparticle, although Pendharkar and his adviser, physicist Chris Palmstrøm of UCSB, say that it will likely be decades before anyone makes a topological qubit. "Right now, we don’t even know if the fundamental thing actually exists," says Palmstrøm. To conclude once and for all that they’ve created Majorana zero modes, Pendharkar says, a research group must demonstrate that a pair of them yields the predicted properties when swapped.

However, Palmstrøm’s group is already working to design a chip-based architecture for the expected qubits. They have designed a layered chip made primarily of indium-based materials containing sheets of electrons that interact only two-dimensionally. They can then etch those sheets into one-dimensional "wires" that they can couple to a superconductor to create the Majorana edge modes. Etching is a much more feasible—and scalable—manufacturing process than laying single nanowires in parallel, says Pendharkar.

Pendharkar and Palmstrøm are careful not to over-promise their device. After all, unlike Google, IBM, and Intel’s quantum computers, theirs doesn’t exist yet. "There are different bottlenecks for different technologies," says Palmstrøm. "We’re at the bottleneck where we don’t even know whether the technology works."

But other quantum computing architectures could hit a different bottleneck, Palmstrøm says: They’ll be difficult to expand into the thousand and million qubit devices that will ultimately be broadly useful to society. Because a topological qubit doesn’t need the same type of error correction as superconducting qubits, it should be easier to make a working thousand-qubit quantum computer out of topological qubits. A topological qubit should be a fundamentally better piece of hardware—they just have to figure out how to make it.

The author is a freelance science writer in Tucson, Arizona.