The new head of the National Science Foundation’s Mathematical and Physical Sciences Directorate invokes Einstein when describing her job responsibilities. "The question I ask myself is if Einstein were proposing [for NSF funding], would he win?," says Anne Kinney. "We want to make sure the answer to that question is always yes."

In January, Kinney stepped up to lead one of the NSF’s largest directorates, which includes five divisions: astronomy, chemistry, physics, materials science, and mathematics. She oversees how fundamental research in these areas is funded—over 40% of the federal support for basic research at academic institutions comes from the Mathematical and Physical Sciences Directorate. Kinney is quick to highlight NSF’s previous and ongoing research success stories, for example its support of the Laser Interferometer Gravitational-Wave Observatory (LIGO). "That’s a very proud example of what you want to make sure you’re always supporting," Kinney says. 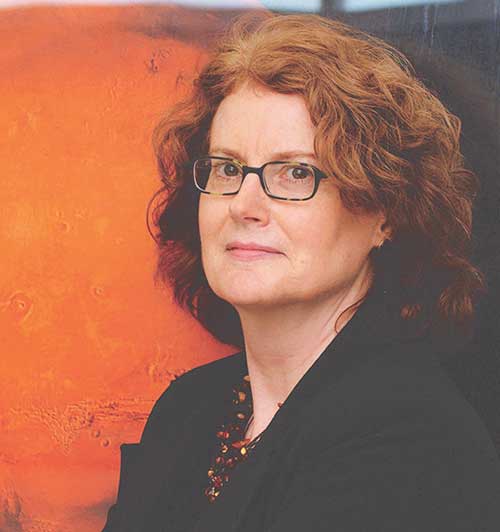 Kinney, who holds a doctorate in physics and astronomy from New York University, spent 14 years at the Space Telescope Science Institute where she was an Instrument Scientist working on the Faint Object Spectrograph aboard the Hubble Space Telescope. In 1999, Kinney joined NASA to lead its Universe Division and manage a variety of current and planned space missions such as the Spitzer Space Telescope and the James Webb Space Telescope. Her work at NASA and a subsequent job at the W. M. Keck Observatory as chief scientist cemented her role in management, a field that combines her scientific background with her interest in policy. "I know how the federal budget works or doesn’t work," she jokes.

Kinney is looking forward to helping to develop several "big ideas" for future NSF investments. One of these initiatives, Windows on the Universe: The Era of Multi-Messenger Astrophysics, is about combining different astronomical datasets—electromagnetic radiation, cosmic rays, neutrinos, and gravitational waves, for instance—to better understand the universe. Another initiative, Harnessing the Data Revolution, is focused on developing methods and infrastructure to effectively process, visualize, and store the enormous datasets that are now hallmarks of many fields of science.

Kinney also hopes to foster collaboration between NSF and other governmental agencies that fund basic research. "Different scientific agencies used to have ‘an offhanded look’ at each other," she says, "[but] I think that culture has really changed." NSF, NASA, and the Department of Energy are working together much more closely, Kinney notes. "That’s a huge positive for science."

Leading the Mathematical and Physical Sciences Directorate is an enormous responsibility, Kinney admits. There’s an "amazing history" of scientific results from NSF-funded research, says Kinney, and she’s committed to continuing that tradition. "I will do my damnedest to make sure the very best science comes out of this institution."