Q&A with Danielle Bassett on the Physics of Brains

2018 APS March Meeting, Los Angeles—Human thought is capable of beauty and baseness, boredom and inspiration. And your brain, that creased chunk of meat in your head, produces all of it.

But how? What, physically, is thought?

Researchers are still a long way from answering that question. But Danielle Bassett, a physicist at the University of Pennsylvania, is developing tools that could eventually link the qualitative ideas of psychology to measurable signals in the brain.

Bassett, the animated recipient of a 2014 MacArthur Foundation Fellowship, uses the mathematical framework of network theory to study how different parts of the brain share information. With a team of neuroscientists, doctors, and engineers, she studies human brains with a magnetic resonance imaging scanner as the subjects complete cognitive tests—including one similar to the video game Guitar Hero. Then, she converts the data into an interconnected map that could easily also describe the interactions between friends on a social media website. Bassett and her colleagues look for patterns in the maps. 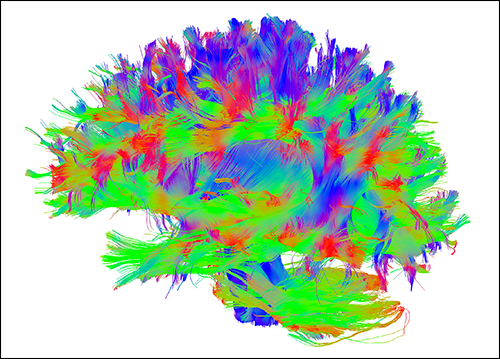 The brain houses an intricate wiring network that serves as an information transmission highway system.

They’ve analyzed brain maps of schizophrenia patients, eight-year-old kids, and of course, University of Pennsylvania undergrads. She spoke with APS News following her invited talk at the 2018 APS March Meeting in Los Angeles.

How long has this field been around?

I would say it really took off around 2010. The first paper technically came out 14 years ago, but it was sort of a trickle initially. My first paper in the field was in 2006. The first textbook, Brain Network Analysis, came out in 2016, and the first journal, Network Neuroscience, was [published] in 2016 as well. I still feel it’s quite new.

How do you divide the brain into nodes in a network?

There are actually very strict boundaries between different sectors of the brain, and these broad anatomical boundaries are very consistent across humans. Different types of neurons exist in each spot, or different patterns of connections between neurons exist in each spot. So there’s something different about the material in different parts of the brain. We study the entire brain and divide it up into about 200 pieces, and we look at the connections from one piece to another.

In your talk, you said that you classify these connections in two different categories. Can you explain?

One type is called a structural edge, where the neurons are structurally connected. In your brain, all neurons have a long tail called an axon, and these tend to line up together. When you have thousands of these tails lining up, you get something called a tract. We count how many of these tracts go from one piece of the brain to another piece.

The other type of connection is called a functional edge. Here, instead of asking whether two things are structurally connected, we’re asking if they are sharing information with one another. So we measure the level of activity over time in two pieces of the brain and compare how similar they are. You can use something super simple, like calculating if they are linearly related to each other, or you can compare their spectra, or do other things that estimate causal relations. These relations are probably supported by structure, but you don’t need to know the structure to estimate the relationship.

We measure these connections using a type of imaging called diffusion MRI, which basically tracks water molecules in the brain. Water molecules are constantly bouncing around in the brain, but they’re constrained by these tracts. Either they’re bouncing inside one of these tubes, or against it.

So you study how these networks change while someone is in the scanner.

Also, the pattern of connection is not very consistent across humans, which is really interesting. The differences have been connected to everything from your IQ to your personality. There’s a recent paper that showed that the pattern is sort of a fingerprint of you. It’s different from anyone else’s.

How noisy is your data?

The common sources of noise are actually cardiac or respiratory artifacts that cause the blood flow to change in your brain. Also motion—our biggest source of noise is a person moving in the scanner. We try to tell them to stay still. It actually complicates taking images with kids, because the younger they are, the more likely they’re going to move.

Cognitive control includes selecting and monitoring behavior, as well as attention and inhibition. It’s really interesting because it’s the most pervasively altered function in psychiatric disease, but we don’t know why. You see it in people with autism, schizophrenia, bipolar disorder, major depression, and post-traumatic stress disorder. We want to know how much our measurements relate to cognitive control. Our results so far indicate that they are related, which is neat.

What kinds of technical limitations do you struggle against?

I’m really interested in human cognition because humans have capabilities that lots of animals don’t—but that means we have to stick with imaging techniques that don’t hurt the person. Right now, the imaging technique can only go down to about one cubic millimeter. Eventually, I would love to be able to go down to individual neurons. But it’s really hard to identify where neurons are in the brain, even when you do it invasively. You certainly can’t do it non-invasively.

Have you ever tested your own brain?

We do have a couple scans where I really needed preliminary data for a grant.