2018 APS March Meeting, Los Angeles—A popular event at nearly every March Meeting is the staged reading of a physics-oriented play. This year’s selection was Lauren Gunderson’s Silent Sky, which dramatizes the life of Henrietta Swan Leavitt from the beginning of her time at Harvard Observatory until her death. The cast from International City Theatre in Long Beach staged the production last year, and read the play at the March Meeting. Silent Sky captures the essence of being female and a scientist during a time when it was considered paradoxical to be both.

In addition to Henrietta, her real life colleagues Williamina Fleming and Annie Jump Cannon play supportive and occasionally sassy roles. Fleming, a Scotswoman and former maid to observatory director Edward Pickering, is the original member of "Pickering’s Harem," the casually sexist term used at the time for the women "computers" who analyzed photographic plates. Annie Jump Cannon, as Henrietta in the play points out, is known for the stellar spectra classification system she and Fleming worked to develop. Henrietta’s star-struck reaction to meeting Cannon and Fleming is perhaps more fitting of a modern teen girl meeting her favorite pop star, but it gets the point across: these women should be respected.

The play opens with Henrietta arguing with fictional sister Margaret "Margie" Leavitt about taking the job at Harvard Observatory. She expresses her passion for astronomy and her need to understand "where we are" in the universe. Margie asserts she should be home with her family or starting one of her own. Her arguments reflect the attitudes of the time. Henrietta however is determined and eventually Margie relents and agrees to help her convince their father she should go.

The audience travels with Henrietta to Harvard and her first encounter with fictional astronomer Peter Shaw. It is his job to "make rounds" checking on the ladies’ work and to orient the new computers to their positions. Shaw remarks in an offhand way that he considers the work tedious. An affronted Henrietta asks Shaw, "It’s not—how best to make you uncomfortable—passion?" 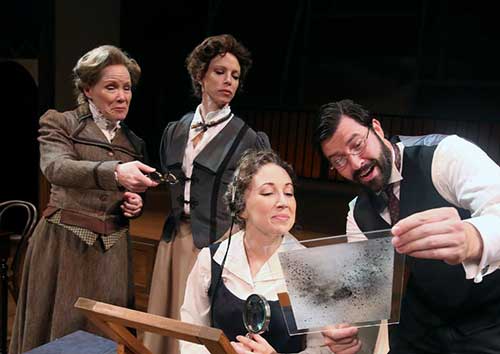 "That’s a bit excessive for physics," is Shaw’s taken-aback reply.

Henrietta goes on to explain why passion is important. She points out that, unlike Shaw, she has had to work to earn her place every step of the way. Passion is the only way she can see to go after her dream. In a time when women did not become professionals, certainly did not become scientists, Henrietta’s drive kept her on a path to becoming an astronomer. Her own passion is not misstated. An obituary for Leavitt published in Popular Astronomy in January 1922 describes her as unusually devoted to her work.

Shaw’s character plays the dual role of romantic interest and butt of the ladies’ jokes throughout. His interactions with the women highlight the feminist themes of the play every time Fleming or Cannon poke fun at him. Was there a real romantic interest in Henrietta’s life? Is it necessary to include one? Aside from the dramatic effect, Shaw seems out of place. Henrietta’s work and accomplishments stand on their own.

The final scene of the play highlights a reality of the women computers. They performed complex calculations and recorded countless astronomical objects but were forbidden from touching the telescope. A brilliant flight of fancy sees the group breaking into the Harvard Observatory and Henrietta gazing through the telescope at her beloved stars.

Following the performance, physics professors Brian Schwartz from Brooklyn College and Smitha Vishveshwara from the University of Illinois at Champaign-Urbana moderated a discussion with the audience and the cast. The conversation centered on the use of art to convey science in popular culture. Though it was pointed out that the play takes liberties with some historical details, the cast explained their desire to represent the emotion and the personal drama of being a female scientist.

When asked if any of the cast members had taken an astronomy class prior to being cast in the play, two stated they had taken a freshman-level astronomy course but most had no exposure to the field. However, the play itself inspired the actors to research their characters, either the real people or similar historical figures of the time, and to draw on the details of their lives. Actress Jennifer Cannon (Henrietta Leavitt) noted Dava Sobel’s The Glass Universe as an invaluable resource for understanding her character.

At one point the cast asked all the physicists in the room to raise their hands. The majority of the audience tentatively raised a hand to the delight of the cast. Jennifer Cannon declared, "We were so nervous!" Leslie Stevens (Annie Cannon) noted she had checked her notes on the Draper star catalog before the performance not wanting to accidentally misstate Cannon’s achievements. This attention to detail is evident throughout, especially in the use of the photographic plate prop that effectively mimicked the real thing.

In the final monologue of the play, Henrietta somberly describes the historical events following her death. Among these include a detail from 1925 when she was sent a letter about a nomination for the Nobel Prize in Physics. Leavitt had died more than three years earlier and was no longer eligible. Historically, then-director of the observatory Harlow Shapley downplayed Henrietta’s accomplishments.

Only much later were Leavitt, Fleming, and Cannon acknowledged for their groundbreaking work, relegated as they were to "the harem." Despite the lack of recognition in their lifetimes, their work has withstood the test of time. As Henrietta states and the cast members enthusiastically repeat, "The universe doesn’t much care what we wear."