Over the last five decades or so, Fermilab scientists have made some of the most fundamental discoveries in particle physics, garnering numerous Nobel Prizes along the way. But the facility may never have been built had a handful of physicists—chief among them the lab’s first director, Robert R. Wilson—not convinced the U.S. Congress of the project’s value. 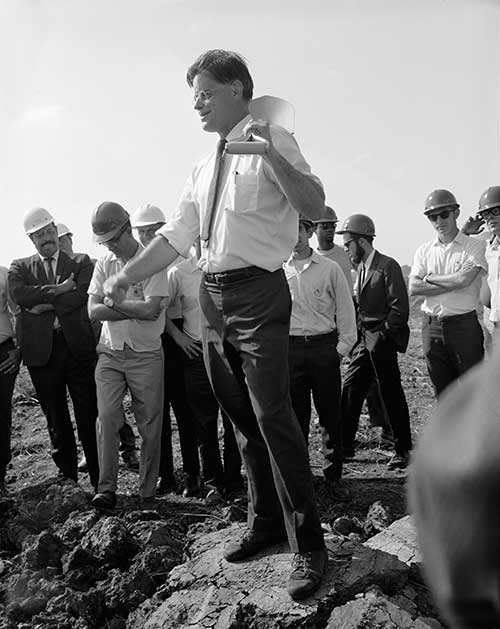 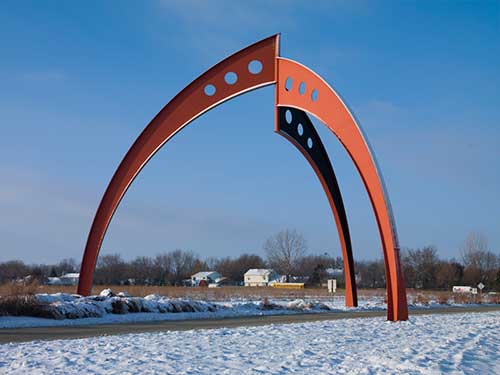 The sculpture "Broken Symmetry" at Fermilab

Born in Frontier, Wyoming, in 1914, Wilson had a lifelong love of the great outdoors, regaling physics colleagues with tales of his life as a cowboy in the Wild West. ("Most of them turned out to be true," physicist Dale Corson told the New York Times for Wilson’s obituary in 2000.) He also had a mechanical bent, tinkering with pumps and vacuum tubes. As a physicist he naturally gravitated towards the fundamental building blocks of nature. At the time, "we only had electrons and protons, and you could put those together into atoms in various ways and make the whole universe," he recalled. "It was a very simple theory that even a dope could understand. I decided then that I wanted to go into physics."

By 1932 he was working in Ernest O. Lawrence’s flagship cyclotron laboratory (a.k.a., the "Rad Lab") at the University of California, Berkeley and received his Ph.D. in 1940. He was infamously fired twice: once for losing a rubber seal right before a presentation to a potential donor, and once for accidently melting a pair of pliers while welding. The lab still offered him his job back, but after his second firing, he decided to move to Princeton University instead. He left Princeton when J. Robert Oppenheimer invited him to join the then-fledgling Manhattan Project. Despite initial reluctance, he wound up being the youngest group leader in the experimental division when Enrico Fermi persuaded him to head the Cyclotron Group—by promising to meet with Wilson every week to talk about physics. "Sure, I sold out," Wilson later said. "Everyone has his price, and mine was a few moments each week with Fermi."

Wilson was among those who witnessed the Trinity Test, from a bunker 10,000 yards north of Ground Zero. Noticing that part of the mushroom cloud of radioactive debris had peeled off and was heading for the bunker, he ordered everyone in it, including soldiers—"using a vocabulary everyone could understand"—into trucks for evacuation. "As we left, that cloud of radioactive debris was right on top of us and it was spooky," he recalled. "We were lucky though. About 25 miles later it came down on a bunch of cattle and turned their hair white."

After the war ended, Wilson moved to the Laboratory of Nuclear Studies at Cornell and designed accelerators. On April 19, 1969, Wilson was among a number of scientists who testified in Washington, DC before the Joint Committee on Atomic Energy concerning a proposed multimillion-dollar particle accelerator to be built in Batavia, Illinois. Despite the key role physicists played in ending World War II, some members of Congress were skeptical of paying a hefty price tag for a machine that did not seem to directly benefit the U.S. national interest.

During Wilson’s testimony, then-senator John Pastore bluntly asked, "Is there anything connected with the hopes of this accelerator that in any way involves the security of the country?"

"It has no value in that respect?"

"It has only to do with the respect with which we regard one another, the dignity of man, our love of culture. It has to do with: Are we good painters, good sculptors, great poets? I mean all the things we really venerate in our country and are patriotic about. It has nothing to do directly with defending our country except to make it worth defending."

Congress approved the funding, and Wilson took the lead on the design and construction of the facility. Under his guidance, the National Accelerator Laboratory (later renamed Fermilab) was completed on time and under budget. "No one was more aware of the technical subtlety of accelerators, no one more ingenious in practical designs, no one paid more attention to their aesthetic qualities," Wilson’s former Cornell colleague Boyce McDaniel recalled. "He thought of accelerator builders as the contemporary equivalent of the builders of the great cathedrals in France and Italy."

It was aesthetics that drove Wilson to design Fermilab’s main accelerator ring to be visible from the air, via a 20-foot-high berm running the entire length of the ring. Nor did he want the facility to look like a typically sterile government lab. So he restored part of the surrounding prairie, complete with a herd of bison. His own abstract sculptures—he studied sculpture in Italy during a 1961 sabbatical—are dotted all over the grounds, most notably "Broken Symmetry," an orange-and-black arch across one of the entrances.

Wilson is often called the "father of proton therapy," thanks to his 1946 paper on the radiological use of high-energy protons. The paper grew out of his wartime research into the effects of radiation damage on the human body; Wilson had been deeply affected by two Los Alamos scientists who died of acute radiation sickness after accidents while testing plutonium cores. For the treatment of cancer patients, most proton therapy facilities today follow the tenets and techniques he established.