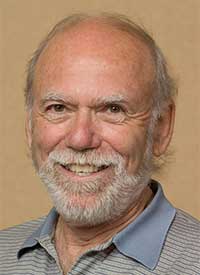 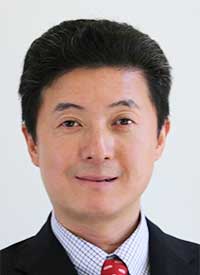 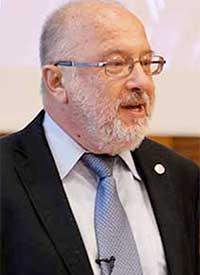 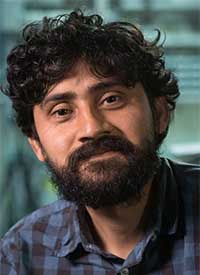 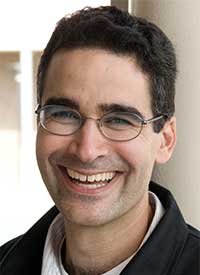 Barry Barish (Caltech) reviewed the history of the Laser Interferometer Gravitational-Wave Observatory (LIGO) and the latest discoveries in gravitational wave detection. Shoucheng Zhang (Stanford) and Ivan Schuller (University of California at San Diego) both gave presentations on the future of computing: Zhang on the discovery of a particle which could be critical to topological quantum computing, and Schuller on the development of computers that mimic the human brain. Creator of the Paperfuge—a simple toy repurposed as a medical centrifuge that requires no electricity—Manu Prakash (Stanford) spoke next on the application of physics to global health and education challenges in developing countries. To round out the evening, Dos Pueblos Engineering Academy founder Amir Abo-Shaeer shared his vision for reimagined science education to equip potential future physicists.

Barish, recipient of the 2017 Nobel Prize in Physics, kicked off the three-hour session with a discussion of gravitational wave detection, beginning with Einstein’s 1916 prediction of their existence. Experimental verification took a further 100 years. As Barish described, gravitational waves remained elusive for a century because no instrument existed that was sensitive enough to detect the small stretching of space indicating passage of a wave until Advanced LIGO in 2014.

Barish became a principal investigator for LIGO in 1994, and the instrument began taking data in 1995 and ran for 11 years without detecting gravitational waves. The issue, Barish noted, was in the sensitivity of the instrument, which was constrained by seismic noise. To combat the constant shaking of Earth, Advanced LIGO was constructed using techniques found in everyday objects such as cars and noise-cancelling headphones. Armed with high-powered shock absorbers and active-seismic isolation techniques that measured ambient shaking and corrected for it, Advanced LIGO went online in September 2014. Within five days, it detected the first evidence of gravitational waves. Since then, it has seen four events caused by black hole mergers and one—most recently—from merging neutron stars. This neutron star merger was also observed by astronomers around the world, creating "what we now call multi-messenger astronomy," says Barish. It also solved a mystery: "It was a puzzle forever where heavy elements like gold came from—but now we know they probably come from colliding neutron stars."

Like Barish, Zhang spoke on a breakthrough physicists have been chasing for decades: the discovery of the chiral Majorana fermion. Until recently, this particle that would act as its own antiparticle was pure conjecture, or as Zhang put it, "fictitious." Research at Stanford University using exotic materials resulted in the discovery that the Majorana fermion—first predicted by Ettore Majorana in 1937—exists. And its existence could be key to new breakthroughs in topological quantum computing.

Quantum computing is plagued by the instability of quantum bits, or qubits, which are easily perturbed, but the topological technique of quantum braiding (see illustration at the bottom of page 3) can create a more robust quantum computer. Chiral Majorana fermions may give way to a new quantum braiding technique: one qubit could be split into two Majorana fermions that would braid naturally as they move through space-time. "We are in an exciting moment," said Zhang. "Finally, I think topological quantum computing can be possible."

Schuller presented an alternative to quantum computing for the future: developing computers that work more like the human brain than machines. This idea of neuromorphic computers is fairly new and inspired by the potential end of rapid advances in traditional computation. If the limits of computing are reached, Schuller says there are three options: quantum computing, neuromorphic computing, or "just learning to live with this."

According to Schuller, the goal of neuromorphic computing is not to create a biological system, or recreate the human brain, but to learn from biology, much like airplanes were developed using the principles of flight observed in birds. The brain, for example, collocates memory and processing, bypassing a bottleneck in computing. It also functions with much lower energy consumption, a principle Schuller says may be used to complement current computational capabilities. As the global demand for computational power rises, more efficient power usage can help mitigate the energy consumption issue. As an emerging field, many fundamental questions exist surrounding neuromorphic computing which, according to Schuller, will require an interdisciplinary approach to seek out answers. 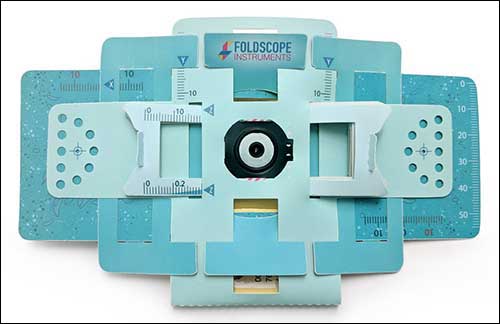 The Foldscope—an easy to assemble microscope.

Prakash moved the symposium away from the future of computing and transported the audience to areas of the world facing global health issues. Physics, as it turns out, can be applied to a number of practical problems such as disease diagnosis and global vector surveillance. Prakash shared his work in developing low-cost tools for "diagnostics under a tree," and making the experience of science accessible to communities across the globe. The Paperfuge and Foldscope, both produced in Prakash’s lab, are examples of what he calls frugal science: a philosophy that inspires design of powerful scientific tools at an ultra-affordable price point. 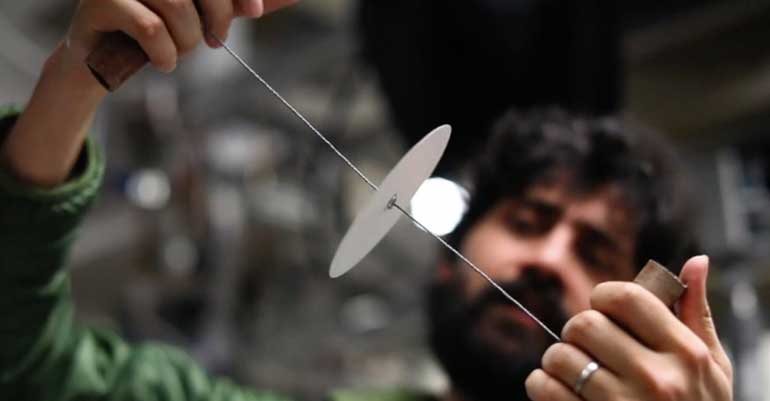 Manu Prakash's centrifuge made from a spinning toy.

At 20 cents a unit, the Paperfuge can be used in place of a centrifuge with just a few minutes of human power: modeled after classic spinning toys, the Paperfuge can reach 125,000 RPM and separate blood from plasma in less than two minutes. This low-cost tool, which replaces expensive centrifuges, can be used to diagnose anemia and malaria. The Foldscope is another inexpensive tool—costing about a dollar per unit—that can be used for both medical diagnostics and education. According to Prakash, the Foldscope has been deployed in over 130 countries. "The Foldscope has produced a massive global community engaged in curiosity-driven science," says Prakash.

Abo-Shaeer concluded the symposium with the story of his journey from struggling science student to founder of Dos Pueblos Engineering Academy. From his personal experiences, Abo-Shaeer has developed a charge for science academia: "It’s time we begin thinking differently about how we measure talent," he says. Dos Pueblos Engineering Academy, which he founded in 2002, brings hands-on, project-based learning to high school students, abandoning traditional textbook-based physics courses. In the Academy’s hands-on lab, students—50 percent of whom are female—have a chance to explore concepts of physics through experimentation and design, while gaining direct engineering experience.

As a college student, Abo-Shaeer’s aptitude for physics and engineering was never fully realized in traditional courses, where he often felt out of place, working twice as hard as other students to achieve similar grades. Abo-Shaeer says he was "saved by the sun," after high marks on a solar-powered water heater transformed his college career and his feelings towards his own scientific skills. His mission at Dos Pueblos Engineering Academy is to bring similar experiences to his students, providing a space where any student can bloom into a scientist or engineer—and he asked that others do the same. "We need to work together to find an educational model in which every person can find their place in science, and contribute to the scientific community," says Abo-Shaeer.