For SHE’s a Jolly Good Fellow?

In October, APS announced its 2017 Fellows. As mid-career women physicists who hope to one day be named Fellows, we despaired that several of our Units had no women Fellows in 2017. We asked each other: Was it a fluke? Was it true in other Units? For other underrepresented groups? We show that APS Units do award proportionally fewer Fellowships to women, and propose actions that we can take to work towards a less biased process for groups underrepresented in physics.

Our own Units were not unique: zero women were selected in 42 of 97 opportunities in the Units over the last three years. Small-number statistics are often faulted for a lack of representation of women: zero is a common outcome. And while regression to the mean yields symmetric distributions for large samples, small samples (such as Fellowship allocations) exhibit long-tailed, asymmetric distributions [1]. Accounting for the range of outcomes thus requires inspecting the distributions rather than the means. 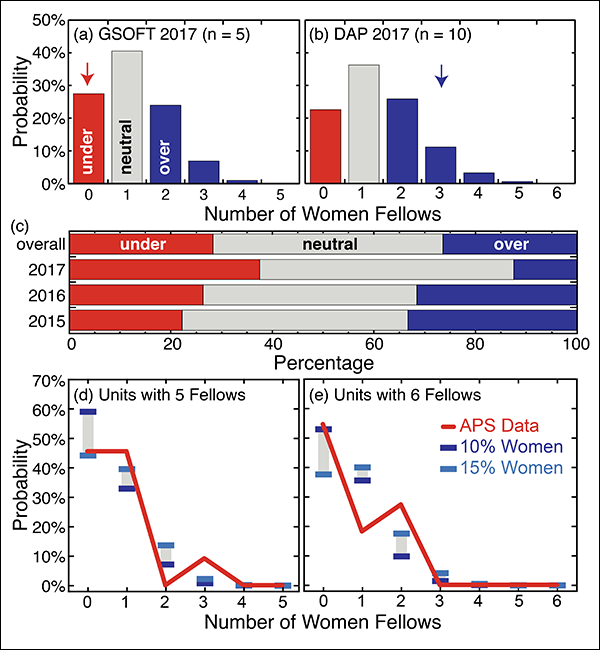 For example, the Topical Group on Soft Matter (GSOFT) has about 23% women, and selected zero women for 5 Fellows slots in 2017 (Fig. 1a). In an unbiased selection [1], zero is a common outcome (27%). 73% of the time, however, there should be one or more women, with 33% of the outcomes corresponding to two or more women. Further, GSOFT has selected zero women several years in a row, which is statistically unlikely for repeated unbiased selections.

Because women are the largest underrepresented group within APS, constituting 14% of APS members in 2016 [2], a statistical analysis was possible. We hope that our findings spur similar analyses along other lines. For instance, we observed that Fellows with names of Chinese origin were also underrepresented.

We examined three years of data, excluding students and Fellows from our calculations. We include Divisions or Topical Groups, but not Forums [3]. For a given Unit and year, we compared the number of female Fellows to a null model: random sampling of the Unit population. We then analyzed each Unit’s performance—over, under, or neutral—in selecting women (Fig. 1c), determined by median values and likelihoods generated by the model [4]. To be fair to Units with small allocations, we discuss only Units with five or more Fellow slots.

Next, we compared distributions of selections of five and six Fellows across Units (2015-2017) to the null model for two scenarios (Fig. 1d,e) spanning best and worst-cases [5]. Although the small dataset is sensitive to noise, this exercise nonetheless reveals interesting features.

In selections of five Fellows (Fig. 1d), one data point corresponds to N = 3 women: the Topical Group on Magnetism (GMAG) 2016 selection. All other selections involve zero or one female Fellows; N = 2 is expected once or twice but does not appear. Based on GMAG’s selection history and the estimated likelihood of the N = 3 selection, this may reflect a concerted effort to nominate women. Without this point, the data would show underrepresentation in the tail of the distribution (N ≥ 2), and overrepresentation of N = 1.

In selections of six Fellows (Fig. 1e), women are overrepresented at N = 0 and N = 2, underrepresented at N = 1, and N = 3 is expected to appear once in this sample but does not. This suggests that some Units may intentionally overcompensate, though this should not be viewed negatively: nominated candidates met qualifications for Fellowship, and APS has a mission to promote a diverse membership.

We conclude that, overall, there is a subtle but pervasive bias against women being selected as Fellows. Effort by one Unit may counteract the lack of effort of another, but does not fix the issue for women who aren’t members of those Units. Through conversations with colleagues, we identified two types of biases at work:

Accumulation of individual biases: Units should both under- and over-perform, so why do we commonly observe underperformance? Nominators may not think of women or may not acknowledge their own potential for bias—no one is truly objective. Committees may stop after selecting one woman per year, without searching their networks for other qualified women. This might be surprising when mid-career women serve in the Unit leadership, indicating that high-level service [6] may not alone raise visibility.

Systemic biases: Cultural biases often lead women to be primary caregivers, and thus make career compromises such as reduced travel. This could make women less visible to their community, even with a strong publication record. Likewise, women may wait for the "right" year to apply for Fellowship: either willingly holding off to feel assured of success, or unwillingly, told to wait. Finally, support for women faculty often drops dramatically at mid-career [7], the key time for Fellowship nominations.

We therefore recommend actions by individuals, departments, Units, and APS elected leaders to counteract biases. These actions must be taken by allies to benefit members of underrepresented groups, as well as those at the intersection of different groups. This problem cannot be tackled only by underrepresented physicists, since it disproportionately adds to their workloads and would further contribute to the sense that they are outsiders.

Individual actions: Any active APS member can nominate! Sponsors should collect at least two letters of support from high-stature persons in the field who can compellingly champion the nominee’s Fellowship. For those wishing to nominate a member for Fellowship, please visit the APS Fellowship Nomination Guidelines page for guidelines. Potential Fellows must be APS members as of January 1 of the year prior to nomination; maintaining membership is important for those who wish to be considered.

Unit Fellowship Committee actions: Annually, each Fellowship Committee should discuss the APS guidelines for nominations, which advise on fair and rigorous practices. Committee members should not assume that they understand the requirements. Fair outcomes are more likely when guidelines are established prior to evaluation. One Committee member should be assigned to oversee the diversity aspects of the nomination process. This person should be respected, and should not necessarily be a member of an underrepresented group.

Unit leadership actions: Each Unit’s leadership should view canvassing for candidates as part of its charge, yet Fellowship committees are often formed too late to contribute substantially. Early on, Unit leadership should act on carryover nominations and request a list of senior women physicists in the Unit who are not Fellows. Working from a list is less likely to amplify unconscious biases. Leaders should hold their Fellowship Committees accountable by training in best practices, examining the nominee list, and completing the final selection report required by APS. After the nomination season, each Unit should present the statistics of nominees to their members and Executive Committee. Units should manage the turnover in committee membership because a rotating chair may not have a chance to promote cases from prior years, and a junior chair may have difficulty in requiring actions by senior Fellows.

APS actions: APS leadership has a responsibility to act, and APS staff have been working to improve the diversity of nominees and recipients. Much effort has concentrated on junior members, rather than those who are post-tenure. APS should publicize summary statistics to help Units gauge their performance. The APS Committee on Fellowship could consider additional slots for Units that perform well by metrics like ours. Indeed, APS previously offered an additional Fellow slot to Units that put forward international candidates. We propose a similar mechanism to encourage women and minority Fellows.

The APS Council recently reduced the number of Fellow slots because previous allocations were based on the total membership (now almost 40% students). This will further strain the selection process and may be a reason that fewer women were 2017 Fellows. Taking the actions we recommend will help prevent underrepresented groups from being further marginalized. We hope that this will energize physicists at all levels to combat bias and recognize excellence through Fellowship across a diverse membership.

3. Forums account for only 10% of Fellows and are too different from Divisions and Groups to apply our analysis, though their gender breakdown is even more skewed against women.

The Back Page is a forum for member commentary and opinion. The views expressed are not necessarily those of APS. APS News welcomes and encourages letters and submissions from APS members responding to these and other issues. Responses may be sent to letters@aps.org