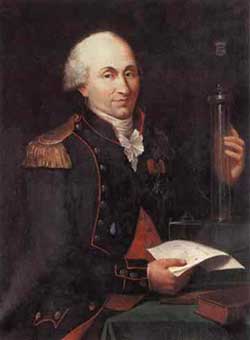 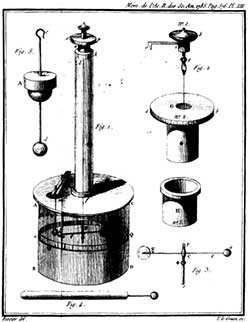 Around 600 BC, the Greek philosopher Thales wrote that when he rubbed pieces of amber with fur, the amber attracted bits of straw and other small objects. When scientists began to study the phenomenon, they already had a word for it, thanks to Thales: "electricity,” derived from “elektron,” the Greek word for amber. In studying this force, others observed that charged objects sometimes attract one another and sometimes repel. Twenty-three centuries later, Benjamin Franklin attributed this effect to the existence of two electrical fluids, one positive and the other negative.

Much of the modern physical description of electrical forces comes from careful experiments done by the French scientist Charles Augustin Coulomb (1736-1806). His parents came from wealthy families living near Montpellier [1], and they moved to Paris when Coulomb’s father began work there. Coulomb earned a degree at the engineering school at Mezieres and became a lieutenant in the military engineering force.

As a trained army engineer, he received several assignments in France. In 1764, Coulomb went to Martinique to supervise the construction of a fort. Coulomb oversaw the construction from 1764 to 1772, and then he returned to France. His health, impaired by the tropical ailments of Martinique, would trouble him for the rest of his life. With his return, his attention also shifted — after many projects in engineering, he began to work on pure physics.

Coulomb became interested in measuring the electrical force between small charged objects and perfected a torsion balance which could reliably measure such small forces [2]. He suspended a needle on a fine fiber of silver, copper, or silk. The needle held a small electrically charged pith ball at one end and a counterweight at the other end, balanced so that the needle could rotate in a horizontal plane. The calibrated torsion balance measured the force needed to twist the needle through a given angle.

By bringing a similarly charged pith ball near the one on the needle, Coulomb determined the repulsive force between the charged balls as a function of their separation. With these experiments, he launched the quantitative study of electric force. He wrote “The repulsive force of two small globes with the same nature of electricity is inversely proportional to the square of the distance between the centers of the two globes” [2].

When the two pith balls had charges of opposite sign, the experiment described above did not work well. If the balls came too close to one another, they would jump together and stick, ending the experiment. With difficulty, he did measure the relation between force and separation in this case, but he decided to use a completely independent method to confirm the result [3]. He suspended a needle with a small plate on one end, and the plate was then charged. The opposite charge was placed on the surface of a hollow sphere of copper or metal-coated cardboard, about a foot in diameter.

Coulomb assumed that the large sphere would behave as if all its charge were concentrated in a point at its center. The needle was made to oscillate in a narrow arc in the horizontal plane. The period of oscillation depended on the force between the charged sphere and the charged plate on the needle, just as the period of the ordinary simple pendulum depends on the force exerted by gravity. Coulomb then measured the period of oscillation at various distances from the large sphere and, using an equation similar to that for the pendulum, related the period to the force between the charges.

The result: Coulomb’s law [3]. “We have arrived here by a method absolutely different from the first ... to conclude that the attraction of the electric fluid called ‘positive’ for the electric fluid, ordinarily called ‘negative,’ is as the inverse square of the distance.” He went on to show that, for a charged metal object or other conducting object, all the charge resides on the surface, no matter the shape of the object [4].

Coulomb’s law underlies much of atomic physics. The attractive force F between an electron of charge e a distance r from a nucleus of atomic number Z and charge Ze is F = Ze2/r2. Ernest Rutherford, studying the scattering of alpha particles, used this equation to show that the diameter of the atomic nucleus is orders of magnitude less than that of the atom — i.e., that the nucleus is effectively a point mass. Later, Niels Bohr used this result as the starting point of his theory of the line spectrum of the hydrogen atom.

The French Revolution brought changes to Coulomb’s professional life. His role in the Académie des Sciences ended when it was closed. His contributions to the weights and measures committee and the supervision of the water supply ceased during the revolution, but in later years he was able to resume some of this work. In June of 1806 he contracted a fever that caused his death in August [1], but Coulomb’s name lives on in physics. Today, the coulomb is the unit of electric charge, and the scattering observed by Rutherford is Coulomb scattering.