Shoucheng Zhang, a theoretical physicist whose research pushed the frontiers of understanding exotic states of matter, has died at 55. His family released a statement saying that he had passed away “after fighting a battle with depression.” News outlets have reported that the family confirmed Zhang died from suicide.

Zhang, a pioneer in topological insulators, also worked on high temperature superconductivity and predicted the quantum spin Hall effect. In addition to being a Fellow of the APS, Zhang also won the APS Oliver Buckley Prize, a Guggenheim fellowship, the Alexander von Humboldt prize, and the Dirac Medal.

“He was one of the brightest theorists of his generation and it's an enormous loss for the whole community that this happened,” said Laurens Molenkamp, the editor for Physical Review B. “I lost a friend.” 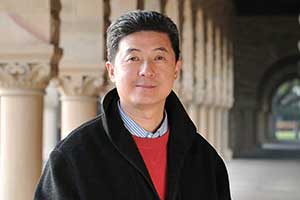 Outside his career in physics, Zhang was an entrepreneur who founded the venture capital firm Danhua Capital, which invested in developing technologies.

“He was a spectacular person. One of the most catholic intellectuals I've known. He was interested in everything. We discussed Lucretius and we discussed the history of empires and he tried to explain to me what blockchain was, I'm afraid, unsuccessfully,” said Steven Kivelson, a colleague at Stanford.

Shoucheng Zhang was born in Shanghai, in 1963, and began attending Fudan University while he was only 15. He then moved on to the Free University of Berlin, and later Stony Brook University, where he earned his Ph.D.

At Stony Brook, he initially studied supergravity with his advisor Peter van Nieuwenhuizen, before turning to condensed matter on the advice of his personal hero, Nobel laureate Chen-Ning Yang.

“He had a superior way of analyzing problems,” said Van Nieuwenhuizen.

As a condensed matter theorist, Zhang wielded his knowledge of particle physics, which gave him a unique ability and insight at the time, said Kivelson. “He had a deep faith in elegant mathematics to reveal important physics, but at the same time, he was also very interested in phenomena that can be measured in the real world.”

In 1993, Zhang became one of the youngest professors at Stanford, where he remained until his death. Students spoke fondly about Zhang.

“Shoucheng was a wonderful person who always pushed his students (myself included) to think originally and creatively,” said Bogdan Bernevig, a former student who is now a professor at Princeton. “I owe a lot of what I am, intellectually, to him.”

Zhang turned his attention to high-temperature superconductivity, where he established a symmetry principle that unified the antiferromagnetic and superconducting states of matter.

Werner Hanke, a professor at the University of Würzburg who collaborated with Zhang on this research said that “One of his central gifts was certainly his infectious enthusiasm,” which led to a love for “exploring radically new ideas.”

Zhang’s seminal work, though, would be in topological insulators. Along with Molenkamp and Charles Kane, he helped introduce the new state of matter—an insulator on its interior, but a symmetry-protected conductor on its surface. Topological insulators have been observed in materials such as mercury telluride (HgTe). The field that has grown around them is in no small part due to Zhang’s work.

“Shoucheng was an outstanding teacher and mentor … who could explain the most complex concepts in ways that made them clear and understandable even to simple experimentalists and chemists,” wrote Stuart Parkin and Claudia Felser, both researchers at institutes of the Max Planck Society in Germany. Both said they would not have worked on topological materials without having met Zhang.

For his discoveries in this area, Zhang was frequently mentioned in shortlists for the Nobel Prize.

In a statement, his family noted that his favorite poem, “Auguries of Innocence,” by William Blake, “expressed his life’s mission for boundless exploration and discovering beauty.”

To see a World in a Grain of Sand
And a Heaven in a Wild Flower
Hold Infinity in the palm of your hand
And Eternity in an hour.