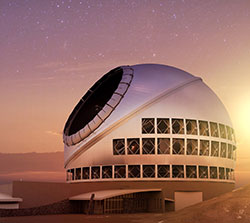 On December 2, Hawaii's Supreme Court rescinded the permit for construction of the Thirty Meter Telescope (TMT) on Mauna Kea. The project has been controversial, as Mauna Kea is considered sacred in Native Hawaiian culture. Beginning in April, when construction was originally slated to start, protesters repeatedly blocked roads leading up the mountain, delaying the project by months.

The court ruled that the process the Board of Land and Natural Resources followed in granting the permit was improper, and "put the cart before the horse." The board granted the permit at a public meeting in 2011, despite requests from opponents that the decision be postponed until a hearing in which testimony and evidence could be presented. The board directed that the hearing take place subsequently, and be resolved before construction would be allowed to begin. Hawaii's Supreme Court determined that granting the permit before the hearing was a violation of due process. Therefore, the court concluded that the permit was not valid.

The $1.4 billion TMT is one of several planned next-generation telescopes, which will be much larger than currently existing telescopes. The 18-story-tall TMT would dwarf the many other telescopes already located on the mountain — a coveted site due to its favorable observing conditions.

In a statement, Henry Yang, chair of the TMT International Observatory Board of Directors, said, “We thank the Hawaii Supreme Court for the timely ruling and we respect their decision. TMT will follow the process set forth by the state, as we always have. We are assessing our next steps on the way forward. We appreciate and thank the people of Hawaii and our supporters from these last eight-plus years.”

The TMT Twitter account stated, "This is not a judgement against TMT, but rather against the State's process in granting the permits." The telescope must now obtain a new permit if it is to proceed.