Joseph Serene, 74, Professor Emeritus of Physics at Georgetown University and former Treasurer/Publisher of APS, passed away on May 1, 2021 in Park Ridge, Illinois. He was an APS Fellow, a Fellow of the American Association for the Advancement of Science, and recipient of the President's Medal of Georgetown University in 2001.

“I was on the Search Committee that recommended Joe’s appointment as APS Treasurer/Publisher in 2003,” said Kate Kirby, former Chief Executive Officer of APS. “Little did I realize then that I would have the pleasure of working closely with him six years later when I was appointed APS Executive Officer in 2009. Joe was a brilliant physicist, a warm and kind individual; he contributed significantly to the financial stability and well-being of APS during his time as Treasurer/Publisher. When Joe left APS in 2014, he was greatly looking forward to teaching physics once again at Georgetown. Our physics community has lost a wonderful colleague.”

Joseph W. Serene was born on April 4, 1947, in Indiana, PA. He received an AB degree in physics in 1969 from Dartmouth College and a PhD in 1974 from Cornell University, where his thesis was on the physics of superfluid helium. Following his PhD work, Serene was a postdoctoral fellow at Stanford University, a NORDITA Guest Professor at Helsinki University of Technology (now Aalto University), assistant professor at Stony Brook University, and assistant and associate professor at Yale University. 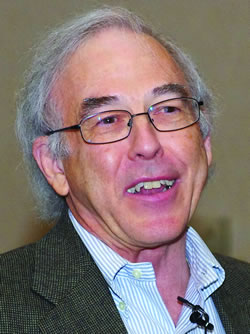 In 1984 Serene moved to Washington, D.C., where he held positions at the National Science Foundation (1984-1987) and Naval Research Laboratory (1987-1993). In 1993 Serene joined Georgetown University as Professor and Chair of the Department of Physics. He subsequently served as Dean of the Graduate School of Arts and Sciences, as a member of the interim Executive of the Georgetown Medical Center, and as Acting Director of Music and Dance. He was named the inaugural holder of the Davis Family Distinguished Professorship in 2004. In 2006, Serene became the Treasurer/Publisher of the American Physical Society, where his responsibilities included managing the operating budget, an endowment of $130M, and APS policies on subscription, open access, and copyright for eleven journals. In 2014 he returned to teaching and research at Georgetown, as the Davis Family Distinguished Professor Emeritus.

“Although Joe was soft spoken, he was deep in his convictions and articulate in his expression of them,” said Gene Sprouse, APS Editor in Chief Emeritus and Distinguished Professor of Physics, Emeritus, Stony Brook University. “As Treasurer/Publisher of the APS, he carried this dual role with distinction. Joe worked hard on the fundamental problem of making the journals sustainable but open, and he was one of the founders of CHORUS, an initiative that is dedicated to doing this. One of the ideas of which Joe was most proud, and rightly so, was making the APS journals FREE to any PUBLIC library, an initiative that helps support the great institution of public libraries and aligns perfectly with APS’ goal of “advancing and diffusing the knowledge of physics. Joe Serene was a wonderful colleague and teacher, thoughtful and patient, and he will be missed.”