On December 25, 2016, esteemed astrophysicist and National Medal of Science winner Vera Rubin passed away at the age of 88.

As a female physicist who was undeterred by the gender restrictions of her field, Rubin confirmed the discovery of the invisible cosmic stuff that astrophysicists call "dark matter," which is predicted to make up almost 90% of the mass of the Universe.

Her paramount research, with collaborator Kent Ford, was carried out in the Department of Terrestrial Magnetism (DTM) of the Carnegie Institution for Science in Washington, D.C. When Rubin arrived in 1965, the DTM and Ford had just built an image tube spectrograph, that allowed telescopes to observe fainter stars in greater detail than before. The pair used this state-of-the-art tool in their work at the Institute. The DTM was honored with a commemorative plaque by APS in May 2013 for Rubin and Ford’s discovery as part of the APS Historics Sites Initiative.

"Vera Rubin was a national treasure as an accomplished astronomer and a wonderful role model for young scientists," said Carnegie’s President Matthew Scott in a statement. "We are very saddened by this loss."

While their studies of galaxy dynamics were aimed at confirming Newtonian gravitational theory — that the stars closer to the galaxy center would be moving faster than those on the outer limits — Rubin and Ford observed that there was no difference in speeds. After observing dozens more galaxies, Rubin and her colleagues showed that an invisible mass (dubbed "dark matter" in the 1930s by cosmologist Fritz Zwicky) was responsible for the uniform movements and kept the stars glued within each spiral galaxy, regardless of their distance from the central mass.

After completing her Ph.D. in Astronomy at Georgetown University in 1954, she plowed through barriers and was the first woman to be allowed to observe at the Palomar Observatory near San Diego, California. A keen advocate for women astronomers, Rubin was a common spokesperson for inclusion at many academic institutions, including at Washington’s elite scientific Cosmos Club.

"[Rubin] frequently would see the list of speakers [at a conference] ...and if there were very few or no women speakers, she would contact [the organizers] and tell them they have a problem and need to fix it." said former colleague Neta Bahcall of Princeton University, in an interview with Astronomy Magazine.

Even beyond her golden years at Carnegie, Rubin was a champion of women’s rights in the physics community. Turner recalls receiving a handwritten letter from Rubin the year he served as the Chair of the Department of Astronomy and Astrophysics at the University of Chicago: "...Vera [said] that if she were a talented young woman, she would not consider applying to our graduate program because we did not have a single woman on the faculty. We now have four; every time we add another woman, I think of Vera."

Rubin’s remarkable passion did not go unnoticed by her colleagues and peers. She was elected to the National Academy of Sciences in 1981, and was awarded the nation’s highest scientific award — the National Medal of Science — in 1993, along with the Royal Astronomical Society’s Gold medal in 1996.

"[Rubin] was an amazing scientist and an amazing human being," said Bahcall in a Carnegie statement. "[She was] a pioneering astronomer, the ‘mother' of flat rotation curves and dark-matter, a champion of women in science, a mentor and role model to generations of astronomers."

Note: This article has been corrected to clarify the nature of the galaxy rotation observed by Rubin and Ford and the provenance of the term "dark matter." 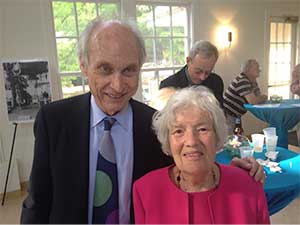 Pictured here in May 2013 with former APS President Michael Turner, Vera Rubin accepts a commemorative plaque by APS as part of the APS Historic Sites Initiative.