Young alumnae convene in D.C. to present to the Apker Award selection committee

The conference room door slung open, and finalist Jonathan Vandermause of Dartmouth College entered the room. Beaming a smile, he placed himself in front of the podium and took a deep breath.

Mac Beasley, professor of applied physics at Stanford University and chair of the selection committee, greeted Vandermause with a warm welcome. “We will ask plenty of questions during your talk … but don’t worry, we will give you the full time not counting our comments.” He leaned back in his chair, prompting the other panelists to focus on the keen speaker.

He clicked through his slides, showing his work in quantum physics — he and his advisor created a new approach to control quantum systems by using fast laser pulses. Vandermause, poised and professional throughout, was quick-witted in answering the inquiries thrown at him from the committee. 30 minutes later, the group burst out in applause, as Vandermause humbly accepted his long-awaited tribute. Ushered out of the room, with his head held high, he waved a last “thank-you” to the panel.

This was the fourth presentation of the day, and each finalist’s research hadn’t ceased to amaze the committee — the amount of intelligence, professionalism, and determination that each graduate embodied proved this bunch was nominated for good reason.

Finalists of the LeRoy Apker awards are chosen for their outstanding work as undergraduates in physics, and selected as someone who holds future promise in scientific accomplishment. All of the finalists received an honorarium of $2,000, wherein half is awarded to their undergraduate institutions physics department, in recognition of their senior thesis or independent research.

Representing a mixture of large and small physics programs, two awards are presented each year, one to a student from a Ph.D. granting institution, the other to a student from a non-Ph.D. granting institution. The job of the committee is to review the nominations, select a group of finalists to present their research, and finally recommend the two deserving winners to the APS Council of Representatives, who review their selections and make them official.

“When I’m watching these students, I focus on their presentation skills, the content of research, and how they approach and answer the questions,” said Beasley. “No matter the final decision, [the committee and] I consider all finalists to be winners here.”

Formidable, accomplished, and inquisitive, each finalist held an excellent academic record and level of unmatched research potential — not to mention an innate passion for physics.

“[After] working for almost 2 years trying to reproduce these structures, it [was] so exciting to finally make it happen,” exclaimed Maggie Lankford during her presentation of her undergraduate thesis. Interested in optics at the College of Wooster, Lankford fashioned an experimental interferometer setup that produced different polarization structures of modes of laser beam profiles.

Other finalists voiced similar feelings in their presentations: “The fun part for me was plugging these equations into the computer, figuring out a way to not have to write out all the solutions,” said Zach Weiner of Kenyon College. A double major in math and physics, Weiner presented his honors thesis, which dove into his novel methods for modeling the non-linear dynamics of particle production from the expanding universe. “These calculations can require a billion field values for every time step [of code].”

With only one nomination allowed by a school’s department, the ideal candidate must exhibit the kind of creative mindset to excel in scientific research and to make original contributions to physics.

“This is such technical work at a young age,” comments Amy Graves, professor of physics at Swarthmore College and member of the selection committee. “The importance of the Apker awards is to help [the students] be the best that they can be, and to honor them — acting as the ‘wind under [their] wings’.”

Established as a memorial to LeRoy Apker, an experimental physicist known for his exceptional work under General Electric, the award holds a high reputation — known as the most prestigious undergraduate award for physics achievements. The winners of the final awards will be announced in the beginning of October in APS News.

Maggie Lankford
The College of Wooster 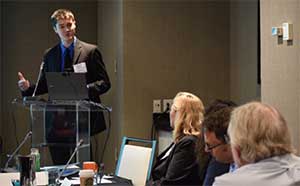