Former APS president was a pioneer in modern statistical physics 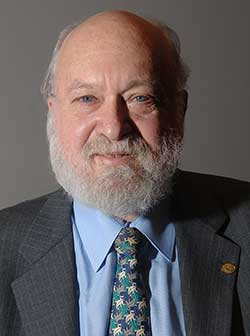 Leo Kadanoff, an emeritus professor of physics at the University of Chicago, and trailblazer in modern statistical physics and theoretical condensed matter physics, died this week at the age of 78. His work on scale invariance and universality in phase transitions shaped the way physicists think about how matter changes from one state to another.

"He was a giant of physics," said Paul Wiegmann, a physics professor at the University of Chicago. The importance of Kadanoff's work on scaling — the idea that in collective phenomena a system will look similar on large and small scales — was not confined to one area of physics, Wiegmann said. "It has a huge range of applications and scaling perhaps is one of the most important and successful concepts of modern physics."

Throughout his career, Kadanoff's interests spanned a broad array of subjects, from mathematical models of urban growth to disorder and chaos in physical systems. In 2013, an anonymous donation to the University of Chicago funded the Leo Kadanoff Center for Theoretical Physics, which brings together researchers from different fields of theoretical physics, to explore the connections between various specialties. Kadanoff's own work bridged fields in this way, contributing not only to statistical mechanics but also crossing over into quantum field theory, string theory, cosmology, and other areas of physics.

"For me, Leo had this outsize presence in the physics department — there are some people who are larger than life," said Emil Martinec, a physics professor at the University of Chicago and director of the Kadanoff Center. "His intellectual curiosity and the breadths of his interests brought a lot of people together."

Kadanoff served as president of APS in 2007, and has been honored with several prizes from the society. In 1977 he received the Oliver E. Buckley Condensed Matter Physics Prize, and in 1998 he received the Lars Onsager Prize, which recognizes outstanding research in theoretical statistical physics.

Other accolades bestowed upon Kadanoff include the 1980 Wolf Prize in physics, and the 1989 Boltzmann Medal of the International Union of Pure and Applied Physics. In 1999 he received a National Medal of Science. Kadanoff received his bachelor's degree from Harvard in 1957 and his PhD from Harvard in 1960. Before moving to the University of Chicago, he held professorships at the University of Illinois and Brown University.

Neil Turok, director of the Perimeter Institute for Theoretical Physics where Kadanoff also held an appointment, said in a statement, “Leo was one of the greats of 20th century physics."

"He was a polymath, a pioneer, yet as down-to-Earth as one could possibly be. In spite of all the great work he had done, he had such humility and such love of sharing: a fresh mind, always working on something original," Turok said.