On June 29, 2017, Joseph A. Johnson III of Florida A&M University passed away at the age of 77. Widely known as a "founding father" of the Black physics community, Johnson was the second African American to obtain a Ph.D. in physics from Yale University, and helped establish the National Society of Black Physicists (NSBP).

Johnson graduated from Yale University in 1965 with his Ph.D. in Physics. Focused on fluid and plasma dynamics, he carried out research at many institutions, including Florida A&M University, where he was named Distinguished Professor of Science and Engineering and Professor of Physics. Johnson was the recipient of nearly $30 million in research funding during his career, which he used to develop innovative ways to study turbulent flows in detail. Beyond his research, however, he served as a mentor to dozens of students, producing 14 Ph.D.s in Physics and Mechanical Engineering.

The NSBP considered Johnson a leading figure in the African American physics community. Johnson and other senior physicists helped prepare the constitution and bylaws of NSBP in 1979, a year after the society’s inauguration. His involvement was honored by NSBP when he was made a charter fellow in 1992 for "distinguished contributions to research in physics and the related physical and engineering sciences, distinguished contributions to physics education, and contributions of the most noteworthy sort to the general goals of NSBP."

Johnson became an APS Fellow in 1990, and shortly after he was awarded the 1995 Edward Bouchet award "for outstanding research achievements in investigation of turbulent and non-equilibrium fluids, and for contributions to the development of minority scientists and engineers." Johnson held a number of honors in the physics community, including Associate Fellow of the American Institute of Aeronautics and Astronautics, and an elected member of the Third World Academy of Sciences.

Through his retirement at Florida A&M, Johnson was still considered an active proponent of mentoring minority physics students. In 2016, Johnson received the Bouchet Leadership Award Medal during the Bouchet Conference on Diversity and Graduate Education at Yale University.

For more information about NSBP, visit the NSBP History page. 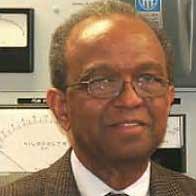