The APS Prizes and Awards recognize outstanding achievements in research, education, and public service. With few exceptions, they are open to all members of the scientific community in the US and abroad. The nomination and selection procedure, involving APS-appointed selection committees, guarantees high standards and prestige. 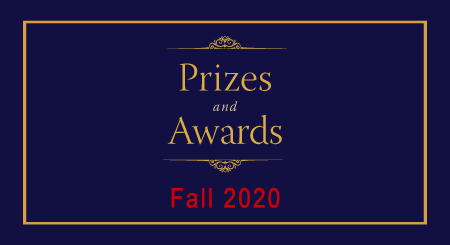 Each year, hundreds of nominations pour into the APS Honors Department from people around the world highlighting the work of their colleagues.  Recipients of the APS prizes and awards are announced in two groups, one in the Spring and then a second set in the Fall.

In spite of the serious challenges posed by the coronavirus pandemic this year, the respective selection committees, with support from the APS Honors team, have completed their work and the list of Fall recipients appears below.

Of special note: the Fall honors this year include the Landau-Spitzer Award, which is given every two years and is a joint award of APS and the European Physical Society. The 2020 Landau-Spitzer Award goes to a collaboration between researchers at the University of Rochester (New York, US) and the University of Bordeaux-Centre National de la Recherche Scientifique (CNRS)-Commissariat à l’énergie atomique et aux énergies alternatives (CEA) in France. The collaboration was recognized for outstanding experimental and simulation research in shock ignition for inertial confinement fusion.

“For seminal contributions revealing the physics of fragmentation and mixing.”

“For fundamental contributions to fluid dynamics, especially turbulence from quantum to astrophysical scales.”

The Landau-Spitzer Award is given for outstanding contributions in plasma physics and for advancing the collaboration and unity between Europe and the United States of America.

“For major advancements of the shock ignition concept through collaborative experimental and simulation efforts in inertial confinement fusion research.”

“For leadership in and pioneering contributions to the theory and kinetic simulations of nonlinear processes in plasma-based acceleration, and relativistically intense laser and beam plasma interactions.”

“For fundamental advances to the kinetic theory of strongly-coupled plasma and plasma sheaths.”

“For creative and insightful use of theory, simulation, and experiment to reveal the dynamics of non-spherical inertial particles in wave-dominated flows, with application to the behavior of microplastic pollution in the ocean.”

For more information on the recipients, please visit the APS Honors webpage.