Particle Physicist was the First African American President of APS

Homer A. Neal, the Samuel A. Goudsmit Professor of Physics at the University of Michigan, died on May 23 at age 75. He was a Fellow of APS and became the Society’s first African American President in 2016. In 2003, he was the recipient of the APS Edward A. Bouchet Award "for his significant contributions to experimental high energy physics, for his important role in formulating governmental science policy, for his service as a university administrator at several universities, and for his advocacy of diversity and educational opportunity at all levels."

“Homer was a very kind man who was passionate about physics,” said 2018 APS President Roger Falcone. “He was tireless in expanding participation and connecting scientists globally, and extremely thoughtful about any activity he undertook, including his leadership of the American Physical Society. It was an honor and pleasure to work with him.” 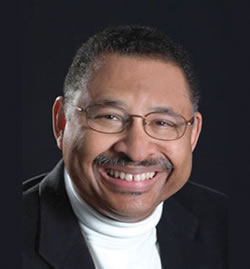 His area of research was experimental particle physics. He was part of the D0 Collaboration at Fermilab that discovered the top quark in 1995. From 2000 to 2015 he was director of the University of Michigan team that collaborated at CERN on the ATLAS experiment, which participated in the discovery of the Higgs boson in 2012.

“Homer Neal was a remarkable man,” said APS CEO Kate Kirby. “His influence was felt well beyond the physics community, which was his home. APS is extremely fortunate to have benefited from his wise and steadfast leadership, and I feel privileged to have had the opportunity to work with him. I will miss him profoundly.”

While on the U.S. National Science Board, he chaired the committee that produced the board's first comprehensive report on undergraduate science education. A result of that study is the Research Experience for Undergraduates Program (REU), and the Research Experience for Teachers Program (RET) now flourishing today. He also served as Chair of the Physics Advisory Committee of the National Science Foundation. Neal offered testimony on numerous occasions to Congress, on matters ranging from the funding of national laboratories to the state of science education.

“I knew Homer for many years during his service to the community — first on the Board on Physics and Astronomy at the U.S. National Academies,” said APS Past President Laura Greene. “More recently we worked quite closely in the APS presidential line — he preceded me as Past President. Homer was continually brilliant and compassionate — always giving a great deal of consideration for every issue; he never failed to provide an astounding jewel of insight and understanding. His tireless and effective work to provide research experiences to undergraduates was always impressive. Homer was always an inspiration to me, and I will sorely miss him.”

Homer Neal spoke from personal experience about diversity and inclusion. In an interview with APS News, he recalled growing up in segregated Franklin, Kentucky in the 1950s. He and a friend who was white had developed an interest in amateur radio but because Neal was black, they were pressured by the town’s residents to break off the friendship. “We were both astounded, and agreed to stop our communications,” Neal said. “But it did teach me that basically when individuals are working on a scientific project together, the color of one’s skin doesn’t matter. It mattered to others, but it didn’t matter to us.”