One of Only Two Physicists in Congress to Retire

Rush Holt, a physicist who has represented New Jersey for eight terms, will retire from Congress in December. 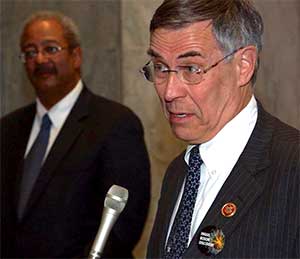 One of Congress’s two remaining physicists announced yesterday that he would not seek reelection. Eight-term representative Rush Holt (D-N.J.) released an announcement on Tuesday saying that he planned to retire from the House after the current session adjourns in December.

“I have never thought that the primary purpose of my work was re-election and I have never intended to make service in the House my entire career,” Holt said in his statement. “For a variety of reasons, personal and professional, all of them positive and optimistic, the end of this year seems to me to be the right time to step aside and ask the voters to select the next representative.”

Before running for Congress, Holt was assistant director of the Princeton Plasma Physics Laboratory (PPPL) in Princeton, New Jersey. He is also an APS fellow and former APS Congressional Science Fellow.

Holt serves on the Committee on Education and the Workforce and the Committee on Natural Resources. A liberal Democrat, he was a staunch defender of the environment and an advocate for improving science and math education.

“I am proud of my service in the House and am pleased to point to accomplishments in policy areas and in service to individuals in central New Jersey,” Holt said in his statement.

Despite his technical background, Holt focused more of his attention towards increasing research funding and improving science education than the nitty-gritty of science policy. He also made several unsuccessful attempts to restore funding to the Office of Technology Assessment, a congressional advisory body defunded in 1995.

Holt was first elected to the House of Representatives in 1998, unseating the Republican Michael Pappas. Last year Holt ran in New Jersey’s special Senate election to succeed the late Sen. Frank Lautenberg (D-N.J.), but only placed third in the Democratic primary.

He graduated from Carleton College in 1970 with a degree in physics, before receiving his MA and PhD in physics at New York University. He taught physics, public policy, and religion at Swarthmore College until 1988. He also served as head of the Nuclear and Scientific Division of the Office of Strategic Forces at the Department of State from 1987 to 1989, before moving to the PPPL.

Holt’s departure will leave Bill Foster (D-Ill.) as the lone physicist in Congress. Holt is one of 13 Democrats and 21 Republicans who announced they will not seek reelection.