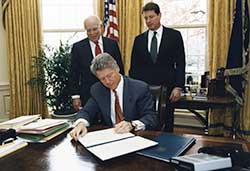 John H. “Jack” Gibbons, a physicist who served as science advisor to President Bill Clinton in the 1990s and directed the now-shuttered U.S. Office of Technology Assessment (OTA) for over a decade, passed away on July 17th.

“Jack was a very highly respected person in the science community,” says Michael Lubell, Director of Public Affairs. “He was an extraordinarily ethical person and a wise individual.”

Operating from 1972 until 1995, OTA was designed as a nonpartisan office of Congress that produced reports on relevant science and technology issues — such as acid rain, nuclear power, missile defense, and climate change — as a service for congressional committees. Gibbons took the agency’s helm from 1979 to 1992.

OTA produced hundreds of reports before Congress defunded it in 1995 amid complaints from Republican lawmakers that it was redundant, sluggishly bureaucratic, and a partisan tool of the Left — a claim Lubell calls “absolutely untrue”.

Dissatisfaction about OTA’s demise has lingered ever since. A 2009 Wired op-ed, for example, written by then-Congressman Rush Holt — a physicist and APS Fellow — called for Congress to resurrect the office.

From 1993 to 1998, as Clinton’s science advisor, Gibbons was dealt a difficult hand — after the Republicans won control of Congress in 1994, Gibbons had to cope with a Congress and White House at odds. At the same time, “he was dealing with a President who really did not have science on his agenda so he had to work pretty hard to get the President’s attention,” Lubell says.

Gibbons received his Ph.D. in physics from Duke University in 1954, and spent his early career at Oak Ridge National Laboratory, where he conducted research in nuclear structure and worked on environmental issues and technology to improve energy efficiency.

In 1973 Gibbons became the first director of the Federal Office of Energy Conservation, and later served as Director of the Energy, Environment and Resources Center at the University of Tennessee, where he was also a professor of physics.

An APS Fellow, Gibbons won the APS Leo Szilard Lectureship Award in 1991. The award is given to scientists who have advocated for the use of physics to benefit society.