Diversity and inclusion help physicists reach their full potential, but according to the numbers, the physics community has some work to do.

Only 27 U.S. physics departments have both African American and Hispanic faculty members, and there are fewer than 75 female physics and astronomy faculty members who are African-American and Hispanic in the entire U.S., according to a 2014 data analysis from the American Institute of Physics. As for undergraduates, only about 800 underrepresented minorities are pursuing a bachelor’s degree in physics, and only 20 percent of 2015 undergraduate physics degree recipients are women, according to statistics compiled by APS.

For the past ten years, APS has helped encourage women in physics by hosting nation-wide networks of conferences, and now work is underway to recreate that success for under-represented minorities.

This past January, over 1500 female undergraduates traveled to the 11th annual Conference for Undergraduate Women in Physics (CUWiP). But this wasn’t a single-site event — 10 different institutions hosted scores of attendees, making this year’s CUWiP the largest to date.

"The conferences are continuing to grow… to about a 15 percent increase from last year," said Pearl Sandick, the Chair Elect of the National Organizing Committee for CUWiP. "We also have 10 host sites this year, which is a lot. In fact, 9 are in the United States, and now we have a partnership with the Canadian CUWiP site [at McMaster University]."

CUWiP started in 2006, with just one university host site at the University of Southern California. Over the past decade, other institutions have joined the effort to reshape the gender statistics of physics majors — including support from the National Science Foundation, and the U.S. Department of Energy.

"There [was] a really vast array of workshops, 3-4 plenary talks, and the keynote speaker, [which] is shared by all the conferences," continues Sandick. "Workshops, which are 30 percent of the conference program, range from [learning] specific professional skills, all the way to discussion about intersectionality with LGBT... there is [always] a huge array of topics."

The 2018 lineup for CUWiP, which is scheduled for January 12-14, already has 12 host sites, including Queen’s University in Canada, and is accepting applications for other institutions to join the growing collaboration.

Hoping to build upon the model of CUWiP, physics majors traveled to the University of Maryland in late October 2016, for the inaugural Conference for Undergraduate Underrepresented Minorities in Physics (CU2MiP). Sponsored in part by the National Institute for Science and Technology (NIST) and the Department of Physics at the University of Maryland, the CU2MiP meeting served as an inclusive environment to highlight the importance of diversity in physics.

"NIST hosted CUWiP back in 2014, and it was such a great experience," said Angela Hight Walker, senior scientist at NIST and chair of the organizing committee of CU2MiP. "It also helped us figure out how to host our first CU2MiP."

The weekend-long meeting connected over 50 undergraduate students in the Atlantic region, and offered a range of panel discussions, NIST laboratory tours, and networking sessions. Although the meeting had a smaller number of attendees, compared to CUWiP’s national audience, the connections and experiences the attendees made were just as strong.

"In our survey [to the students], they told us the relationship-building opportunities [were] great," continued Hight Walker. "And the smaller conference size was really advantageous. Many of [the students] are from smaller schools and hadn't seen labs like that. They were just in awe, [thinking] like, ‘This could be possible for me, working at this type of place!’".

After their trial run, the organizers of CU2MiP are in the works of planning another meeting for Columbus Day weekend (October 7-9) in 2017. Hight Walker knows just how important it is to ensure minority inclusivity based on the experience with the previous students at CU2MiP.

"We've been in continued contact [with the students], asking questions and knowing [which ones] are applying for summer positions... and they’ve been in contact with each other. It [may have] been a regional conference, but they really established strong relationships… There was time for them to bond when [the staff] wasn’t around, and it made a huge difference."

The team hopes to bring in top-notch speakers, that can compete with last year’s keynote speaker — Freeman A. Hrabowski, President of University of Maryland, Baltimore County.

"He got a standing ovation… And for undergrads, standing up is not usually their thing. It was so great to see such a response."

To learn more about CUWiP and CU2MiP, visit their homepages.

To apply as a hosting institution for CUWiP, applications are due on September 1, 2017. 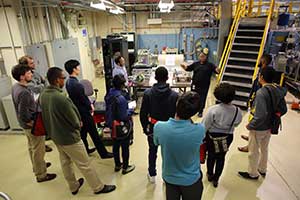