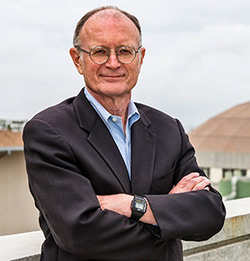 Physicist Michael Witherell, the vice chancellor for research at UC Santa Barbara, is the next director of Lawrence Berkeley National Laboratory, the University of California (UC) announced on January 21.

Witherell will take the reins at the lab (a U.S. Department of Energy National Laboratory, managed by UC) from current director Paul Alivisatos, who announced he would step down in March last year. Alivisatos will become vice chancellor for research at UC Berkeley, in another appointment announced on January 21.

Witherell has previously served as director of Fermi National Accelerator Laboratory. An APS Fellow, he was awarded the APS W.K.H. Panofsky Prize in Experimental Particle Physics in 1990.

"Berkeley Lab is one of the world's outstanding laboratories for science and technology,” Witherell said in a statement. “It provides both solutions for the greatest technological challenges facing the nation, and scientific discoveries that are worthy of Nobel prizes. I cannot imagine a more rewarding job than leading this great lab."