As news broke that the Large Hadron Collider’s restart would be delayed, more than 300 physicists were in Washington, D.C. planning the machine’s successor. 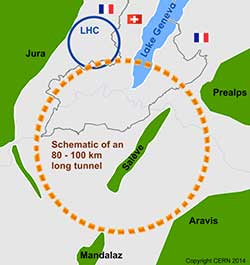 Many of CERN’s top scientists and administrators, along with representatives from interested countries outside Europe, met in late March 2015 to share their research and preliminary designs for a Future Circular Collider (FCC) technical report.

Ultimately, those involved need to come up with a workable design for a next-generation accelerator at CERN that would eclipse the LHC in both size and energy. Though early in the design process, the FCC is envisioned as a 100 TeV circular collider between 80 and 100 kilometers in circumference. Such a gargantuan project faces a variety of technical, economic and political challenges, some likely easily surmountable, others less so.

“I think for the next collider, we should go to the Moon,” said Bruce Strauss, a physicist in the Department of Energy, using an Apollo-era metaphor. “There are some challenges ahead, but I think we should go.”

The current plan is to run the LHC through about 2022 followed by a major upgrade to turn it into a high-luminosity machine, the HL-LHC by 2025 for a ten-year science program. The FCC would start construction shortly thereafter.

Participants in the meeting, which was organized by IEEE in conjunction with the U.S. Department of Energy and CERN, hope to complete the FCC’s technical report by about 2018 in time for the next update to the European Strategy for Particle Physics in 2019 or 2020.

“The LHC is the main machine and now we have people looking at what else can be [built],” said Frederick Bordry, the director for accelerators and technology at CERN.

The final design for the FCC is up against a parallel effort to design the Compact Linear Collider, or CLIC. The potentially 42-kilometer long, 3 TeV lepton linear collider would also be located under the French and Swiss countryside.

Once both designs are completed, CERN administrators will recommend one of the two options when it is time to update its particle physics strategy. The event in Washington, D.C. was the second annual design conference for the FCC, and the first held in the United States.

Though researchers at the meeting said that there seemed to be no obvious scientific showstoppers, there would be a number of engineering challenges to overcome. The biggest will be designing strong enough magnets for the giant particle accelerator’s storage ring.

The dipole and quadrupole magnets that would direct and focus the 100 TeV particle beams will need to be significantly more powerful than any built so far. Researchers estimate that the magnets will have to produce 20-tesla magnetic fields to contain and control the beam. Currently, LHC magnets produce about 8 tesla, while Fermilab has built 11 tesla prototypes. Designs for the HL-LHC call for 16 tesla magnets.

Another significant technological challenge is containing the synchrotron radiation emitted by the particle beam as it circles the outer storage ring. The LHC currently produces a relatively negligible seven kilowatts of radiation, while the FCC would generate about five megawatts of radiation, enough to potentially wreak havoc on its sensitive cryogenics, electronics and other equipment.

Because they make up the majority of the machine, the magnets and their raw materials, would also be the project’s biggest cost driver. Based on the size of the accelerator, it’s estimated that at least 6,000 metric tons of superconducting niobium-tin would be needed to build the requisite magnets.

“The present cost of niobium-tin is a showstopper, ” said Ezio Todesco, a researcher at CERN. He added that the cost would have to drop to about $800 a kilogram, down from the current $1600 a kilogram price tag. Though he said manufacturers he spoke to are willing to take on the challenge, “we are still very far from this.”

Surprisingly, computing power to track the vast numbers of particles produced in collisions was also highlighted as a potential concern. Microprocessors have continuously gotten smaller and cheaper over the years, but it is unknown whether that trend will continue. “Extrapolating computer technology 20 years into the future is non-obvious,” said Ian Bird, the computing grid project leader at CERN. “We’re close to the physical limits for feature size.”

On the flip side, as long as computer power progresses, detector technology is generally expected to keep up with the needs of the particle physics community. “Much detector technology is driven by silicon technology and computing power, so we can count on significant improvements,” said Werner Riegler, chair of the technical board of the LHC’s ALICE detector.

Making the science case for building the machine is also a top priority, but complicated by the discovery of the Higgs boson in 2012. There are no more obvious holes left in the standard model to fill in, though mysteries persist about the nature of dark matter and supersymmetry.

“The first goal is the complete exploration of the Higgs boson and its dynamics,” said Michelangelo Mangano, a theoretical physicist at CERN. “Dark matter remains a crucial element in the search.”

But without a clear next step, articulating the need to funders for the next generation machine could be difficult. “I’m not convinced we can actually make it make sense to the people who actually pay the bills… unless we have some really compelling arguments,” said James Siegrist the associate director of the office of high energy physics at the Department of Energy.

The role of the United States in the project is uncertain in part because the timing of the study is awkward for the high-energy physics community. Two years ago, before the FCC project geared up, the U.S. physics community came together for a field-wide meeting to help develop a broad, ten-year roadmap for future high energy physics projects. The meeting, known as Snowmass on the Mississippi, played a major role in informing the final report of the Department of Energy’s subsequent Particle Physics Project Prioritization Panel, which laid out the agency’s official ten-year strategic plan.

“I don’t think at Snowmass [the FCC] was thoroughly assessed,” Siegrist said. “From an agency perspective, we don’t really know what the U.S. community thinks about this.”

He added that the consensus that emerged out of the 2013 meeting was to put the heft of U.S. research behind developing technologies for the proposed International Linear Collider, and the high luminosity upgrade planned for the LHC in the mid 2020s. “The HL-LHC is the highest priority in the near term,” Siegrist said. “We can’t have everybody run off to work on the FCC while we’re still not finished with the high luminosity LHC.”

The LHC Accelerator Research Program, or LARP, is the U.S.’s main collaboration with CERN to advance accelerator technologies. Right now, the program is geared entirely towards developing magnets for the high luminosity LHC upgrade.

“In terms of direct studies, [FCC] is not something I can directly invest in,” said Giorgio Apollinari, the LARP director at Fermilab. “I would love to be able to help but the mandate is what it is.”

American scientists have a lot of experience to draw on. The United States was almost always pushing the cutting edge of accelerator technology until the cancelation of the Superconducting Supercollider in 1993. Even after accelerator dominance was ceded to Europe, U.S. researchers put together a major theoretical study in 2003 for a 240-kilometer “Very Large Hadron Collider” at Fermilab.

“The U.S. has a lot to contribute,” said Michael Syphers of Michigan State University. “The U.S. has 25 years [experience] in running a 2 TeV collider, and 10 years designing and partially constructing a 40 TeV collider.”

Throughout the conference, the ghost of the SSC seemed to loom over much of the proceedings. Presenters made frequent references to a variety of lessons learned from the aborted project.

“Had we gone down that route, we could have had the Higgs a decade ago,” said Rep. Bill Foster (D-Ill.) who opened the conference. He was an accelerator physicist at Fermilab before running for Congress, and worked on some components of the SSC. “[Europe] got the project and we didn’t, so doing the politics right is important.”

Though the LHC experiments and detectors are international projects, with collaborations with dozens of nations around the world, the accelerator itself was a European funded and built machine. “Everyone is convinced that the next machine is a world-wide machine,” Bordry said.