The Back Page: To Save Science, Talk With the Public

Physicists’ public engagement — in schools, with journalists, and beyond — can safeguard science. But academia’s indifference, and sometimes hostility, to this engagement is standing in the way. 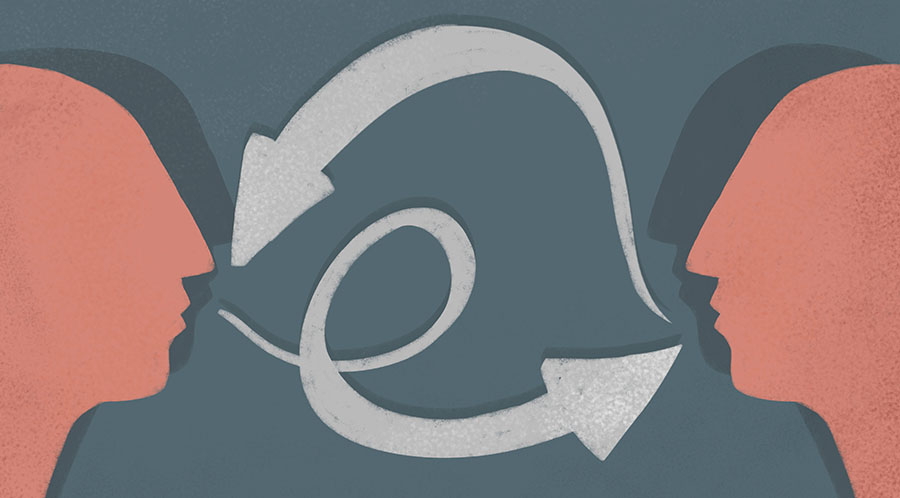 A paradigm shift is occurring in our society: Somehow, unbelievably, knowledge and opinion are increasingly confused.

As scientists, we know that facts are facts, no matter how bad actors spin them, and that scientific consensus is generated by a rigorous process based on evidence and experiment. But denial of climate change, vaccine hesitancy, anxiety over nuclear energy, fears of GMOs, and even mistrust of individual scientists (e.g., Anthony Fauci) are rampant online and in everyday conversation. This misinformation bewilders the public, leads to policies that hurt people and the planet, and poses risks to science itself: Will science lose its ability to shape the future?

To reverse this dangerous direction, we scientists must go straight to the public. “Public engagement” is any effort to work with and inspire non-experts, and it takes many forms. A scientist might visit a classroom, speak on a podcast, invite the public to tour a lab, help design a museum exhibit, give or arrange a public lecture, or work with journalists on a science story.

Beyond this, though, public engagement should be an expected skill of our profession. It should be recognized by our institutions and used, along with research, teaching, and service work, in hiring and promotion decisions (as we discuss below, this is seldom the case today). This no-cost change at institutions would boost participation in engagement activities that can build back public trust in science and help our field.

Engagement work is needed because it gives science a human face, a proven way to build comfort and trust. And direct, person-to-person engagement can do more than simply provide information: By personalizing a topic, we make it relatable. For example, instead of debating the specifics of climate change, we can shift the discussion to the plight of those who have lost homes to fires in the western U.S.

And by discussing people’s fears and misconceptions, engagement can go beyond trust-building: It can change the minds of people skeptical of science. The benefits of personal interactions with the public, which can surpass the benefits of reading an article or hearing a lecture, have been documented across a range of topics, including ocean pollution, vaccines, drug treatments, nuclear energy, and environmental disasters.

Unfortunately, we scientists face a dilemma each time we are offered a chance to engage with the public: We must choose between that effort or work that advances our careers. Public engagement is often evaluated indifferently or negatively during hiring, performance assessments, and promotion decisions, despite its importance for the future of our field. If you’re doing outreach, so the thinking goes, you’re not doing the important stuff.

This attitude throttles participation in engagement work. That’s why we urge academic institutions — like universities, national laboratories, and research facilities — to change their policies and make participation in public engagement a criterion for hiring and career advancement decisions.

We envision public engagement as an addition to, rather than a replacement for, traditional hiring and promotion requirements. We also believe that these skills should be developed at all stages of a scientist’s career, beginning with the undergraduate curriculum and expected of graduate students, postdocs, and faculty.

While the scientific community already has (albeit imperfect) ways of evaluating research, teaching, and administration, it has given little thought to evaluating public engagement. However, we recently suggested criteria that institutions could use to evaluate this work.

This will take commitment from all of us, and below we describe resources that can help. We also hope to get help from APS. At the time of writing, the APS Panel on Public Affairs is considering a draft statement that supports boosting public engagement efforts and recommends that institutions consider such work in hiring and career advancement decisions.

We realize, however, that change is hard, and that the academic world is particularly slow to reform. You need only look at the garb we wear at graduations to realize that universities value tradition. In our own field, the phrase “modern physics” describes century-old discoveries. For institutions to make a substantial change, it must be in the institution’s interest.

Fortunately, effective public engagement has enormous benefits. Spreading the word about research successes can bolster an institution’s reputation, a key to landing external funding. Events like science cafes, lab tours, or school visits can forge strong ties to the local community. And by working with journalists, you can share your science with the world, building public support for your next exciting, and perhaps taxpayer-funded, project.

Well-designed engagement events can also help build a physics identity for both facilitators and attendees — in other words, help them imagine themselves as physicists, with their own unique style. This has been shown to attract people to, and keep them in, physics. To adhere to best practices, the designers of these programs should collaborate with skilled facilitators or physics education experts.

Better still, public engagement can inspire the next generation of scientists, sparking curiosity in ways difficult to replicate in class. One of us, Lincoln, became a scientist in part because he read books by Asimov, Gamow, and Sagan, written for non-experts. In turn, he has met students who went into physics because of books he authored. Now, he hopes these budding academics will pay it forward.

The other (Smith) vividly remembers being enthralled by public science events, including a university chemistry demonstration at his high school, an evening chat session with a Nobel Laureate in college, and a lecture by Stephen Hawking as a postdoc. These drew him to a career in science and kindled his passion for engagement, to positive effect. For example, after Smith recruited a young scholar to research exploding stars, he learned that the graduate was inspired to study astrophysics by a public lecture Smith gave years ago.

Public engagement can also improve diversity in our workforce, which in turn strengthens our field. Consider, for example, the unexpected impacts of a video series that Lincoln makes for the Fermilab YouTube channel. These videos, geared toward the general public, explore particle physics and cosmology — and a significant fraction of applicants for a Fermilab summer internship, which aims to bring diverse young scientists into the field, cited the videos as inspiration for applying.

Engagement can also help individual researchers. As we and our collaborators recently detailed, engagement work can drive your research in new directions, lead to advances in your subfield, and build stronger relations between your community and institution. Because of this, public engagement should be considered integral to one’s research, rather than something extra done on the side.

Given these benefits, we urge our community to step up engagement efforts. Event by event, we can help build back trust in science. We can also inspire the next generation of physicists, make our field more diverse and inclusive, and look at our own research in new ways. We hope that all our colleagues can experience the joy, creativity, and intellectual stimulation that we have obtained through engagement work.

How can you get started with public engagement? Like many of our colleagues, we never had formal training in this area, but now there are resources that can help. The new Joint Network for Informal Physics Education and Research (JNIPER), for example, brings together facilitators; physics education researchers, who track the impact of public engagement; and practitioners, the folks doing engagement work. JNIPER members share best practices, fuel creative new efforts, and learn from other like-minded physicists.

However, dealing with contentious issues or with people who are suspicious of scientific consensus takes special preparation. For this, consult the APS Science Trust project, which trains scientists to address misinformation and build trust in science through a slew of proven strategies — by empathizing with all points of view, speaking one-on-one with someone instead of having a public debate, and never attacking someone’s core beliefs, for example. Participants practice roleplaying with facilitators, which puts new skills to the test.

Trying to change the minds of science skeptics isn’t easy. It requires creativity, hard work, and passion. But aren’t these the tools of successful physicists? If we use these tools to unlock the secrets of nature, we can use them to rebuild society’s trust in science. Let’s work together to make this change — starting with the way our institutions value public engagement.

Michael Smith is an APS Fellow and Distinguished Scientist in physics at Oak Ridge National Laboratory. Don Lincoln is an APS Fellow, Senior Scientist in particle physics at Fermilab, and author. Both have enjoyed engaging the public on the wonders of physics for over thirty years. This article benefited from discussions with members of the APS Committee to Inform the Public, APS Public Engagement Office, Executive Committee of the APS Forum on Outreach and Engagement, and APS Division of Particle and Fields Snowmass Public Engagement and Outreach Topical Group.