Left: Starfish Prime lit up the night sky over Hawaii, nearly 900 miles away. Center and right: After the blast, a nuclear “aurora” formed, caused by beta particles, emitted by radioactive materials, moving along Earth’s magnetic field.

On the night of July 9, 1962, a brilliant flash lit the sky above Hawaii. Lights on some streets went dark, and inter-island communications from Kauai were severed. A red, aurora-like glow haunted the southwesterly skyline for hours.

The flash marked the detonation of a thermonuclear warhead 250 miles above Earth’s surface, in the ionosphere, the outermost portion of Earth’s atmosphere where several thousand satellites orbit today. The nuclear explosion that set the sky aglow that night was a classified U.S. government experiment known as Starfish Prime.

It wasn’t until 2006 that key data from the experiment was declassified. Since then, scientists have developed computer models that simulate the effects of high-altitude nuclear explosions, in part to better inform U.S. defense and readiness. This October, at the 2022 APS Division of Plasma Physics’ meeting in Spokane, Washington, a team of computational physicists from Lawrence Livermore National Laboratory presented the first model to simulate the electromagnetic pulse from Starfish Prime from first principles — an achievement made possible by access to world-leading supercomputers.

Starfish Prime was one of a flurry of nuclear experiments in the 1950s and early 1960s, when the Cold War between the U.S. and the Soviet Union was raging. “We were doing all sorts of nuclear explosions in the atmosphere” and even some underwater, says Dan Winske, a physicist now retired from the Los Alamos National Laboratory in New Mexico.

One of the questions the U.S. government sought to answer was how a thermonuclear explosion would impact the nation’s fledgling satellite infrastructure. But modeling such a blast was difficult: Back then, a physicist trying to predict the effects “could probably only do a one-dimensional calculation,” says Winske. “The models weren’t very good. It was all very crude. … They had no idea what was going to happen, in some sense.”

So in the summer of 1962, the U.S. government detonated a real high-altitude warhead. The Starfish Prime rocket was launched from a remote outcrop called Johnston Island, dredged from a coral atoll and barely large enough for a runway and a handful of military buildings. The nearest landmass of any significance is the Hawaiian islands, about 900 miles away.

Chasing the warhead skyward were smaller rockets, outfitted with magnetometers, sensors attuned to the magnetic field. Below, U.S. military vessels stood by, waiting to record transmitted data to magnetic tapes. Soviet ships prowled the waters nearby, keeping a watchful eye. 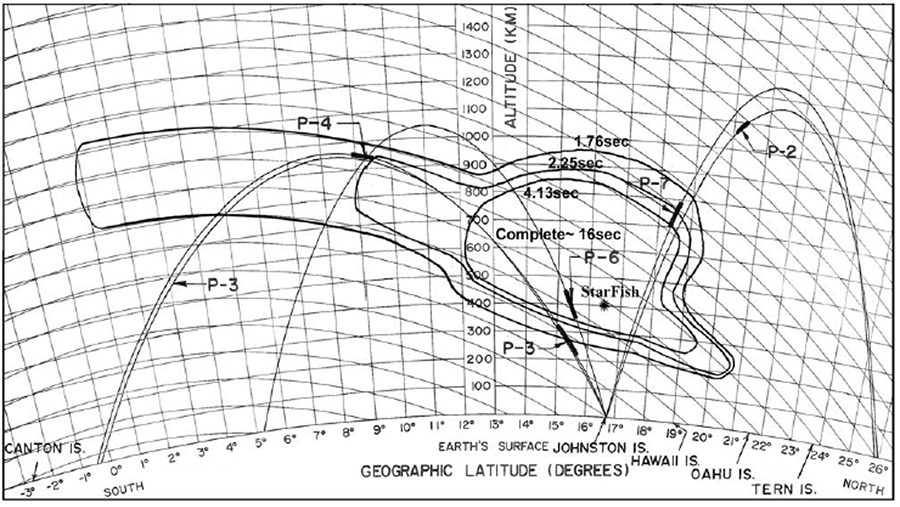 Trajectories of military rockets launched in tandem with the Starfish Prime warhead, to record magnetic field data. Physicists later used this data to simulate the blast.

The detonation ejected a huge plume of high-energy electrons — beta particles — upward, while energizing a massive swath of the atmosphere below, in a region that physicists refer to as the x-ray ionization patch.

Those beta particles can “become trapped in the Earth’s field, and they’re deadly for satellites,” says David Larson, a computational physicist at Lawrence Livermore. Of the 24 satellites in orbit in 1962, Starfish Prime damaged at least one-third.

The blast blew out a huge bubble of plasma, producing a giant, short-lived cavity in the Earth’s ionosphere. The planet’s magnetic field was completely expelled for nearly half a minute.

The blast also emitted an incredibly strong electromagnetic pulse, or EMP. “The signal from the EMP propagates down to the ground,” says Larson. “It couples into long conductors like power lines,” which is why Starfish Prime triggered street light blackouts in Hawaii.

In 1963, a little more than a year after the blast and just months after the Cuban Missile Crisis, the U.S. and Soviet Union agreed to ban above-ground nuclear testing. The Starfish Prime magnetic tapes are now some of the only data ever recorded from a real high-altitude nuclear test.

In the decades after, thousands of scientists spent millions of hours developing the physics and computational models to interpret high-altitude phenomena, like those observed in Starfish Prime. But mysteries remained — especially surrounding the EMP emitted, which was far larger than physicists had theorized.

When the U.S. government shelved the testing program, Palmer Dyal, the scientist who led the recording of Starfish Prime’s magnetic field data, shelved the box of magnetic tapes, too — in his garage.

And there the tapes sat for four decades.

Then, in the early 2000s, the U.S. Defense Threat Reduction Agency asked Dyal if he would analyze the recordings. In 2006, Dyal published the first magnetic field data from a once-classified high-altitude nuclear explosion ever shared publicly.

With access to world-leading supercomputing capabilities, Larson’s team of computational physicists at Lawrence Livermore saw an opportunity. In 2017, they began the four-year process of developing a code that could simulate a large-scale EMP — specifically, a portion of the pulse known as E3, caused by distortions in the Earth’s magnetic field. “When that field wiggles, it produces an electromotive force that can generate voltages in long loops of wire,” like power grids, says Mikhail Belyaev, who presented the team’s work at the DPP meeting.

The team validated the code, named TOPANGA, against the declassified Starfish Prime data. Because the x-ray ionization patch from the detonation spanned more than 5,000 miles and the blast occurred hundreds of miles above Earth’s surface, Larson’s team had to design a simulation that would capture a vast volume of atmosphere.

Five seconds after detonation in the TOPANGA simulation, x-rays have ionized a massive patch of atmosphere (yellow-orange-red). A plume of beta particles reach the ionosphere, where satellites are susceptible.

The team also needed to simulate nearly two minutes of EMP behavior in increments smaller than a millisecond. Even on a 10,000-core supercomputer, each simulation took two or three days.

To fully capture the EMP behavior, Belyaev says, “you have to simulate the entire system, not just a small part of it.”

TOPANGA isn’t the first model developed to simulate the Starfish Prime EMP, but it is the first model that can three-dimensionally reproduce the magnetometer measurements recorded in 1962 from first principles — including kinetic modeling of ions, an inertialess fluid of electrons, and even ionosphere gas chemistry.

The E3 portion of the EMP, it turns out, exhibits two types of behavior, dubbed E3a and E3b. E3a travels around the x-ray ionization patch to reach the Earth’s surface, a longer bypass that diminishes the pulse’s intensity. E3b moves straight through the patch, striking the planet directly.

The Lawrence Livermore team’s simulation also produces powerful visualizations. “You can see the curvature of the Earth … the magnetic bubble forming. You can really picture what’s happening,” says Belyaev.

Sixty years after the last warhead was detonated in the atmosphere, TOPANGA paves the way for a new kind of high-altitude nuclear test — one safely confined to the simulated atmosphere of a supercomputer.

In the future, the TOPANGA team plans to expand their modeling to other sources of EMPs, such as geomagnetic storms. Research into global EMP events can tell scientists how an EMP propagates from space, through the ionosphere and to the ground. This is important for safeguarding critical civilian infrastructure, like power grids, from the destructive effects of EMPs, both natural and manmade.