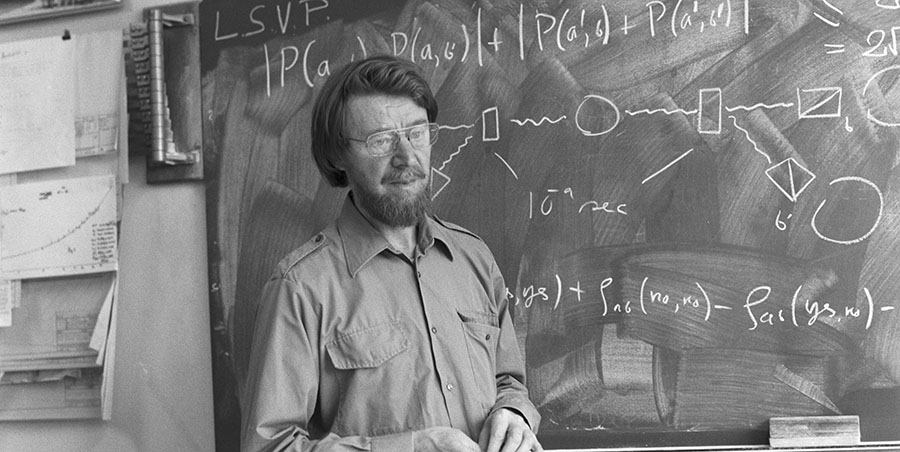 John Bell lectures on his theorem in 1982.

When the most important quantum theory paper in 30 years was published November 4, 1964, virtually no one noticed. “On the Einstein Podolsky Rosen Paradox” accumulated fewer than a dozen citations in its first six years, and when it garnered wider attention, many physicists dismissed its implications. Even now, with the 2022 Nobel Prize in Physics awarded to experimenters performing eponymous Bell tests, its singular role wresting concrete answers from nature about reality remains underappreciated.

Its author, John Stewart Bell, was born July 28, 1928, in Belfast. His mother Annie was a dressmaker and his father Jackie sold horses. The family was not wealthy; in Bell’s biography, Andrew Whitaker notes that Annie sewed John’s academic gown from blackout curtains.

Bell entered Queen’s University as World War II ended. There, he was academically excellent but already unsatisfied with physics orthodoxy. The ruling Copenhagen Interpretation proposed a distinction between classical observer and quantum observable — a belief Bell would later deride as a “shifty split.” Seen through the Copenhagen Interpretation, the location of an electron, for example, exists as a nebulous cloud of probabilities described by the wave function until it collapses into a fixed value. Because of this “shifty split,” proponents often caution against philosophizing about the quantum world, and making assumptions beyond what can be experimentally proven.

An older paper, published in 1935 by Einstein, Boris Podolsky, and Nathan Rosen (EPR), would capture Bell’s imagination. EPR argued, using a thought experiment, that quantum mechanics was correct, but incomplete. As Einstein later quipped: "Do you really believe the Moon exists only when observed?" One possible solution for the ills of quantum mechanics was “hidden variables,” undetectable traits baked into particles all along. If these traits were secretly present, they would return existence to things, giving even the Moon properties regardless of whether it was measured.

Concerned with what is measurable, not what is, the Copenhagen Interpretation and its high priest, Niels Bohr, rejected hidden-variable theories. The indeterminacy of particles was fine, and in any case, the theorist John von Neumann had proven hidden-variable theories impossible in 1932. For Copenhagen Interpretation adherents, there was no reason to discuss hidden variables that had been ruled out.

Bell saw things differently. EPR pointed out a central problem, a deep philosophical question about reality — and there was no way of telling who was correct.

In 1952, Bell received a jolt of inspiration when David Bohm published his interpretation of quantum mechanics, a hidden-variable theory that could go toe-to-toe with the Copenhagen Interpretation. Bohr’s acolytes were unimpressed. They attacked Bohm’s theory as superfluous — ironically, for making the same predictions as existing quantum theory. (This was, in fact, the point — to show that a hidden-variable theory could also account for observations.) Albert Einstein, meanwhile, rejected Bohm’s ideas because they didn’t preserve locality, the commonsense principle that objects are affected only by their immediate surroundings.

But for Bell, it was critical, and he would later recall that he “saw the impossible done” by Bohm, though Bell never became a Bohmian. “This was not the one horse he lashed his wagon to,” says David Kaiser, a physicist and historian at the Massachusetts Institute of Technology. Rather, he took inspiration from Bohm’s orthodoxy-defying work to not just “shut up and calculate.”

Over the next twelve years, Bell kept the ideas in the back of his head, working through them in his free time. Occasionally, he ran into workplace colleagues he could debate, such as Franz Mandl at Harwell, the newly formed UK atomic research center where Bell worked in the late 1950s, and Josef-Maria Jauch at CERN, where he took a job in 1960. In 1963, Bell and his wife, Mary, also a physicist, took a sort of sabbatical in America, freeing him up to work on quantum foundations. The resulting two papers would, eventually, revolutionize the field.

Bell’s first paper, “On the Problem of Hidden Variables in Quantum Mechanics,” as part of a muck-up involving a misfiled manuscript and unreturned mail, was not published until 1966 — two years after his more famous “second” paper. In this first paper, which was published in Reviews of Modern Physics, even though it was anything but a review, Bell targeted proofs by von Neumann and others that claimed to rule out hidden variables. While von Neumann’s math was sound, Bell acknowledged, the proof was fatally flawed because it rested on a false assumption that the rules for quantum mechanics applied to hidden variables.

Toward the end of the paper, Bell discussed Bohm’s theorem and non-locality. Foreshadowing, he noted that “there is no proof that any hidden variable account of quantum mechanics must have this extraordinary character” but that it would be “interesting, perhaps” to find such a proof.

In his second paper, Bell took what was a philosophical debate and turned it into an experimental question. The correlations between a pair of entangled particles — how often both were polarized vertically, for example — could be used to differentiate local hidden-variable theories from quantum mechanics. The key was to “ask different questions of the two particles,” Kaiser says. “You start getting a very clear quantitative distinction.”

Bell’s inequality puts a limit on local hidden-variable theories; with correlations above that limit, the universe must be quantum. Finally, there was a way to tell which theory was correct, and whether the universe obeyed the “local realism” EPR longed for. But Bell did not trumpet the finding; it was published in a prestigious but new journal, Physics Physique Физика, which would shutter just four years later. The foundations of quantum mechanics were still mostly off-limits, seen as philosophy for cranks.

Experiments would eventually vindicate Bell, though not as he’d hoped: They ruled out local hidden variables, and locality as well. What they did, however, was prove that the foundations of quantum mechanics were interesting and valuable. “Philosophically-inclined physicists have a seat at the table now, in a way that they didn't in Bohm's day, they didn't in Bell's day,” Kaiser says.

Broader recognition outside of the physics community has come slowly, too. In Belfast, it is illegal to name roads after people. So in 2015, when a semicircular road at the waterfront was renamed, it was dubbed Bell’s Theorem Crescent.