The satellite’s free-fall experiments yielded the most precise confirmation yet of weak equivalence. 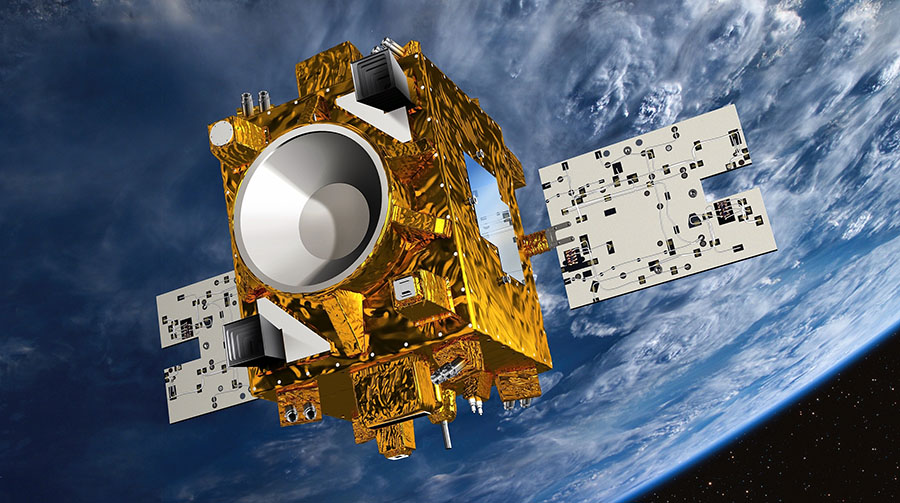 The MICROSCOPE mission satellite was decommissioned in 2018, but its final findings were published this week.

In a grainy NASA video from 1971, the astronaut David Scott, donning a spacesuit and standing on the dusty lunar surface, holds up a feather and a hammer. “A gentleman named Galileo … made a rather significant discovery about falling objects in gravity fields,” Scott says. “Where would be a better place to confirm his findings than on the moon?”

He drops the feather and hammer. In defiance of the intuition of Earth-bound viewers used to seeing feathers drift slowly, both objects hit the ground at the same time. “How about that?” he muses.

The stunt introduced many to the weak equivalence principle (WEP), central to the theory of general relativity, but it wasn’t a formal experiment. Now, new and final data from MICROSCOPE—a boxy satellite that, between 2016 to 2018, orbited more than 400 miles above Earth—has added to physics the most precise test yet of the WEP.

The WEP dictates that two objects in the same gravitational field should accelerate in free-fall at the same rate, regardless of their configuration or mass, so long as there are no other forces (like air resistance, which slows a falling feather on Earth but not on the airless Moon).

The MICROSCOPE results, published in the journal Physical Review Letters on September 14, reveal the tightest constraints for the WEP ever identified. Researchers analyzed free-falling objects on MICROSCOPE and found that the objects’ accelerations differed by no more than one part in 1015 (a quadrillion), ruling out violations of the WEP at this level. These results build on MICROSCOPE findings published in 2017.

“Five years ago, the very good behavior of the satellite and the instrument motivated our team to publish the first results of the mission which, although preliminary, would be useful to scientists,” said Manuel Rodrigues, a scientist at French aerospace lab ONERA and study co-author. “But now, for the second paper, we have refined those results—we have accumulated more data.”

When it launched in 2016, the MICROSCOPE experiment was the next step in a long history of tests on Galileo’s universality of free-fall, a principle crucial to Newton’s gravitational theory. From 1885 to 1909, the physicist Loránd Eötvös performed one of the most famous of these tests: He used torsion balances, instruments capable of measuring tiny differences in force, to demonstrate the equivalence principle at a precision scale of one part in 100 million.

Eötvös’s findings landed in the lap of Albert Einstein, who merged the equivalence principle with special relativity to describe the relationship between gravity and space-time. In 1915, he unveiled the theory of general relativity, which transformed our understanding of gravity and has passed every test thrown at it.

Yet Einstein’s theory does not mesh neatly with quantum physics, the rules that govern nature on its smallest scale: atoms and their parts.

So, by testing the WEP with increasing precision, researchers might find its limit—a measurement that violates general relativity—and throw open the door to theories that unify quantum and classical physics.

“We are almost sure that there is a violation at a certain level, but it is difficult to predict what that level is,” said Gilles Métris, a scientist at Côte d'Azur Observatory and study co-author.

For the MICROSCOPE mission, Métris and his colleagues designed an experiment to measure the acceleration of hollow alloy cylinders. A nested pair of each was stowed in one of two sensor units in the satellite. If the masses’ acceleration varied by more than one part in 1015, this would signal a violation of the WEP. To measure any variations, sensitive instruments aboard the satellite would pick up changes in the electrostatic forces that keep the masses in unison.

After the satellite’s launch in 2016, the team faced challenges. Equipment had to be adjusted for temperature sensitivity, power consumption, and circuitry issues.

“Before it launches, you’re not sure that the launch will be a success,” said Métris. “You are not sure that the instruments will work, because they cannot fully be tested on the ground for how they will behave in space. There are so many possible sources of systematic problems.” For example, the scientists had to scrub data of random glitches caused by crackles in the satellite’s insulator.

But, he added, “the experiment still worked well.” The team noted these challenges in their 2017 findings, but methodically resolved them in their new paper.

While the analysis does not reveal a WEP violation, the findings are significant. The study places the narrowest constraints yet on the scale at which any WEP violation could occur. It also recommends improvements, like equipment upgrades, for future experiments.

According to the researchers, these improvements could one day lead to a precision of one part in 1017. Perhaps a WEP violation lurks there, ready to throw limits around general relativity and make way for grander theories.

"It's a kind of game. You have to bet to win, by doing this experiment, to see something,” said Rodrigues. “This time we didn't. If one day we could see something, then it would be revolutionary.”

Abigail Eisenstadt is a science writer at the American Association for the Advancement of Science.