The research could improve embolization, a procedure to stop bleeding and fight tumors. 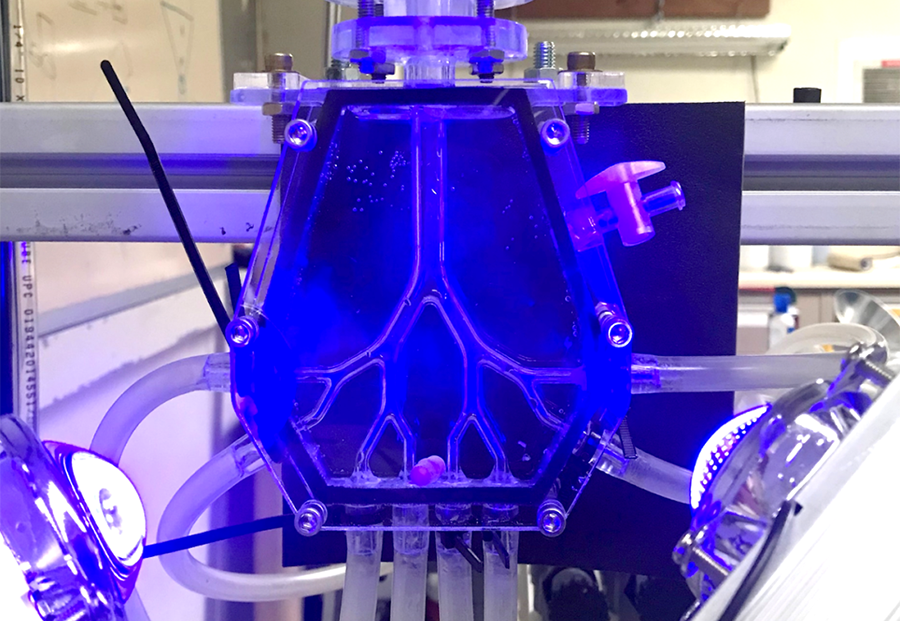 The researchers’ 3D-printed model of a blood vessel.

To fight tumors, doctors sometimes use a procedure that starves tumors of blood. To “embolize” a tough-to-remove tumor, a physician passes tiny particles, such as gelatin sponges or beads, into a specific blood vessel, blocking it. Without oxygen-rich blood, tumors can shrink—and the process is less invasive than surgical removal.

But embolization has its limitations, and the ability to predict how these particles move in vessels could improve the accuracy and efficacy of the procedure.

In a new paper published in Physical Review Fluids, researchers report on a 3-D model they built to examine how various concentrations of particles affect their speed, acceleration, and distribution in a branching system, like a blood vessel.

“[Embolization] is not only for tumors,” says Omid Amili, a professor of mechanical engineering at the University of Toledo and a co-author of the study. “It has multiple applications.” Embolization is used to stop bleeding after injuries, for example, and even treat pain. It’s also used in conjunction with chemotherapy drugs in the treatment of tumors.

Serious complications from embolization are rare, but every so often, the particles—usually no bigger than grains of sand—can block the wrong vessel and deprive healthy tissue of blood, or fail to block blood flow as intended. Predicting particle behavior, then, can improve the procedure’s success.

Previous studies have looked at different factors affecting particle dynamics in the body, but “not many people have studied the importance–or the effect—of the particle concentration,” says Yinghui Li, the lead author and a fluid dynamics researcher at ETH Zurich.

The team designed an idealized, symmetrical model of a blood vessel, which was 3D-printed out of clear resin by a collaborator at the University of Texas in El Paso. The model starts as one tube but then forks, like branches on a tree. By the bottom, the single tube—the mother end—has split into eight daughter ends.

“It's a relevant geometry to the arterial branching in the liver,” says Amili. “But also it happens in the respiratory system—our airways have very similar branching.”

Using a high-speed camera, the researchers captured 3,000 to 5,000 images in 10 seconds of the LED-illuminated beads moving through the system. To determine the beads’ velocity and acceleration as they traveled, the team tracked every individual particle, says Amili.

Four images of the vessel model. From left to right, particle concentration increases.

The team varied the volume fractions—or concentrations of beads—between 0.2% and 2% and tested how this changed the beads’ movement. The more particles they added, the more their speed and acceleration decreased.

According to Li, that makes sense. Just as you’re more likely to bump into someone in a crowded room than a mostly empty one, “when you have more particles within a certain volume, the particles tend to collide more,” she explains. “They also have less room around them to move around or to diffuse.”

But the team found something else, too: Although the flow rate and pressure were exactly the same throughout the eight branches, the beads tended to collect into the center branches instead of the outer ones.

Amili explains that when the particles are smaller in size, they tend to distribute themselves as expected—about evenly between the branches. But when the concentration or size of the particles increases, they no longer follow this pattern. As a result, doctors who want to target certain blood vessels for drug delivery might increase or decrease particle concentration depending on their goal, the study suggests—though more research is needed.

Previous research from Amili and Filippo Coletti, the Principal Investigator and a co-author, had revealed similar results, but they had tested much smaller particle concentrations, and the team wasn’t sure if higher concentrations would yield the same outcome.

“It was a mix of surprises and also exciting observations,” Amili says. “What you expect is not necessarily happening in reality …That’s something that is important from the practical standpoint” for physicians.

And while their model is simpler and more symmetrical than vessels found naturally in the body, the team picked a shape that could be used across multiple fields of scientific research, Amili explains.

“In a way, we can represent how the drug beads get delivered in the airways, with the inhalers, for example, or in the embolization,” he says, adding that the research is applicable to any branching system with particles of this size traveling through it. “We wanted to pick a geometry that is not only for embolization, but also has a more economical, generalized distribution that the physics community is interested in.”

The researchers are already working on future studies, including a smaller system in which they can increase the particle concentration enough to observe how they clog blood vessels. They also plan to examine how particles interact with red blood cells, which could ultimately help researchers understand how drug deliveries move in the aorta, which has a different flow system.

“We would like to know how these particles travel in the aorta so we can direct them to a certain site,” Amili says. “It’s an interesting problem.”

Margaret Osborne is a freelance writer based in Utah.