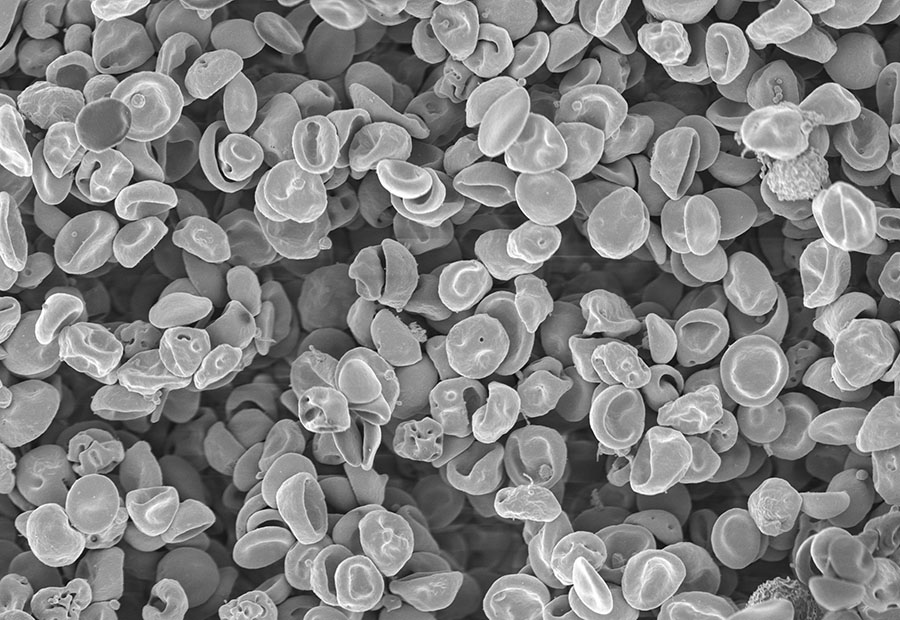 Red blood cells of someone with malaria. Healthy, round cells are interspersed with infected, misshapen ones. New research might help scientists sort sick cells, like those deformed by malaria, by softness.

When a mosquito harboring a malaria parasite bites you, the parasite attacks your red blood cells, changing the cells’ disk-like shape and making them more rigid. The sick cells stick to the inside of blood vessels, causing malaria’s slew of symptoms, like fever and vomiting.

Malaria isn’t the only disease that changes a cell’s physical properties: Cancer and sickle-cell anemia can, too. So being able to quickly, effectively separate sick, stiff cells from healthy, squishy cells could help scientists detect and study disease.

A study published August 8 in Physical Review Fluids details a proof-of-concept experiment to use soft cells’ tendency to deform—that is, squish and change shape—to sort them on microfluidic devices, small instruments etched with tiny channels in which scientists can control and study fluid. The research could support the development of therapeutic or diagnostic microfluidic methods for separating complex mixtures of cells with different properties, like sick and healthy cells.

“This is the first time the experimental work has been done to show [that] actuation-like change of shape of soft particles, like a red blood cell, can move them forward,” says Chaouqi Misbah of Grenoble Alps University in France, who was not involved with the paper.

In March this year, researchers at the University of Bayreuth in Germany published a hypothesis on this potential phenomenon in Physical Review Fluids. When soft particles deform in a flowing fluid, the drag on them changes. By pushing a mix of particles in a fluid forward and backward through a microchannel at different rates, it might be possible to push soft particles forward and leave the rigid ones behind, the researchers suggested.

A separate team at the University of Bayreuth decided to test this theory with red blood cells, which are particularly well suited for the experiment, says Pierre-Yves Gires, a co-author of the most recent paper. “They don’t have a nucleus,” he explains. “They can be deformable, as they have to fit through very thin capillaries” in the body.

To test it, Gires and his colleagues Sebastian Krauss and Matthias Weiss ran a mixture of red blood cells and hard plastic beads that wouldn’t deform through the channels of a microfluidic device, which they designed and printed themselves. They ratcheted the particles in one direction for an interval of time, then reduced the flow rate and drove the particles backward for even longer. The soft cells would deform during the forward motion, and as the scientists changed the flow rate, the soft cells inched along the channel while the hard beads were left behind.

But in a real-world application, you would want to separate sick and healthy cells from each other, not from synthetic beads. So the team set up two populations of HeLa cells, a type of cultured human cell, that had been treated with an enzyme called trypsin to prevent them from sticking to the microfluidic channels. They softened some of the cells with chemicals that disrupt a cell’s cytoskeleton, then applied a mixture of the soft and normal HeLa cells to the microfluidic device and tested the asymmetric flow pattern.

The researchers were not able to segregate the two populations, an unfortunate but not unexpected result. “I’m not surprised they were not successful with HeLa,” Misbah says. Gires agrees. Unlike red blood cells, HeLa cells contain nuclei that limit how much they can deform, he says. “That’s one challenge when using this technique with stiff objects,” Gires says.

A few cell-sorting methods already exist: Some push acoustic waves back and forth, while others use electromagnetic waves, Gires says. But an advantage of Gires’ and his colleagues’ system is that it’s inexpensive. “It does not require some sophisticated device. It's just a simple microfluidic device with a pressure controller,” Misbah says.

It’s not clear, however, how energy-efficient the method would be, and Misbah says the process of sorting the cells from the beads “remains relatively slow.” The speed and efficacy of the separation need to be tested against other sorting techniques before researchers can start thinking of direct applications, he says.

But even beyond its potential biomedical applications down the line, Misbah says, the work is “exciting from a fundamental point of view.”

Tess Joosse is a science journalist based in Madison, Wisconsin.