How to Squeeze a Rock Like the Center of a Planet

Scientists shared research at SHOCK22, an APS conference about materials under pressure. 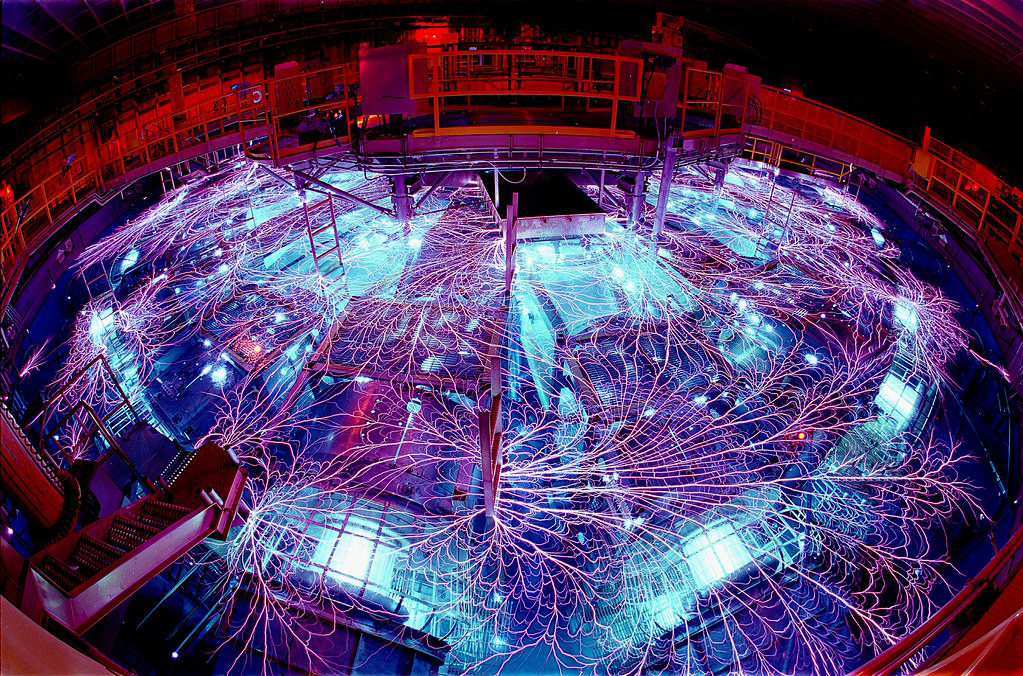 The Z Machine at Sandia National Labs in Albuquerque, New Mexico, which scientists can use to study the intensely high-pressure environments of the inner Earth.

Extreme conditions lie just beneath our feet. The Earth’s mantle—a rocky layer that begins about seventy kilometers underground—ranges from 1,000 to 3,700 degrees Celsius. The mantle gives way to our planet’s iron-nickel core, where pressure rises above a million times that of sea level.

To study matter under these high temperatures and pressures, researchers turn to shock and compression physics, which combines experiments with theoretical thermodynamics, chemistry, and condensed matter. The work informs subjects ranging from planetary formation to the design of explosive weapons.

This July, scientists gathered in Anaheim, California, to discuss research on these extreme conditions at the 2022 Conference of the APS Topical Group on Shock Compression of Condensed Matter (SHOCK22). The conference featured sessions on experiments for studying the interior and exterior of Earth—and even bodies in outer space, like our very own Moon.

Bethany Chidester of Los Alamos National Laboratory presented experiments that probe how the Moon formed. Scientists’ current hypothesis is that 4.5 billion years ago, a Mars-sized planet collided with the proto-Earth, scattering debris into Earth’s orbit. Over time, this disk of debris coalesced to form the Moon.

However, this “giant-impact hypothesis” fails to explain several observations. Samples indicate that the Moon is mostly made of the same material as Earth—but simulations of the giant-impact hypothesis suggest that the Moon formed largely out of debris from the Mars-sized planet, rather than from Earth. In addition, the Mars-sized planet’s impact and any later collisions would not have produced enough debris to form the Moon.

“[The model] actually doesn't work to make a moon that we have,” says Chidester.

In 2019, researchers in Japan tried to resolve these discrepancies by proposing that the collision occurred when Earth’s surface was covered in a liquid magma “ocean.” However, their model also used imprecise equations to describe the behavior of proto-Earth material.

To improve the accuracy of the equations, Chidester’s group conducted high-pressure experiments on materials similar to those that may have been in that magma ocean. To replicate the crushing pressures of the inner Earth, the group relied on Sandia National Laboratory’s Z Machine, which uses magnetic fields to move an aluminum plate into a sample, and the high-powered laser OMEGA EP based at the University of Rochester.

The group used samples made of enstatite and bronzite, iron-containing minerals found in Earth’s mantle, and pyrolite, a synthetic glass with the same chemical composition as Earth’s mantle. The group squeezed these materials with pressures as high as 1.6 terapascals—more than ten million times the pressure at sea level—and then measured the materials’ temperature and reflectivity.

Even when her group updated the magma-ocean model with their new measurements, simulations still indicated that the Moon would be mostly made of the colliding planet. In other words, a magma ocean is not enough to explain why the Moon is mostly made of Earth materials.

“That model, in the way that they published it, is not a viable way to make the Moon that we see,” says Chidester. The mystery of the Moon’s makeup continues.

These experiments could reach beyond the systems they were designed to study. For example, Chidester studied how much the materials reflected light at various pressures. At higher pressures, the materials appeared to turn more reflective, indicating that they were becoming metallic. These results could inform our understanding of how planets generate magnetic fields, says Chidester.

In another talk, Hannah Bausch of Northwestern University presented work in preparation for a high-pressure experiment to study the boundary between Earth’s mantle and core, about 3,000 kilometers underground. Using earthquake data, researchers have discovered that swaths of rock at this depth, some as big as continents, move about 30 percent slower than the rest of the mantle. These so-called ultra-low velocity zones have raised many questions—how did they form, for example, and why do they move so slowly?

One hypothesis is that the zones contain more iron than their surroundings do, which might slow them down. Bausch presented theoretical calculations of the properties of ferropericlase, an iron-containing mineral thought to be one of the main constituents of Earth’s lower mantle. Bausch is using these calculations to design high-pressure experiments with these materials using—like Chidester—the Z Machine.

Experimental facilities like the Z Machine and the OMEGA EP are unique in their ability to apply high pressures to materials quickly without letting heat escape. As scientists are unable to actually study the proto-Earth of the past, or to retrieve samples from deep within Earth’s mantle, the extreme conditions that these facilities create give scientists a glimpse of otherwise inaccessible environments.