Could the budding technology see a breakthrough application in chemistry? 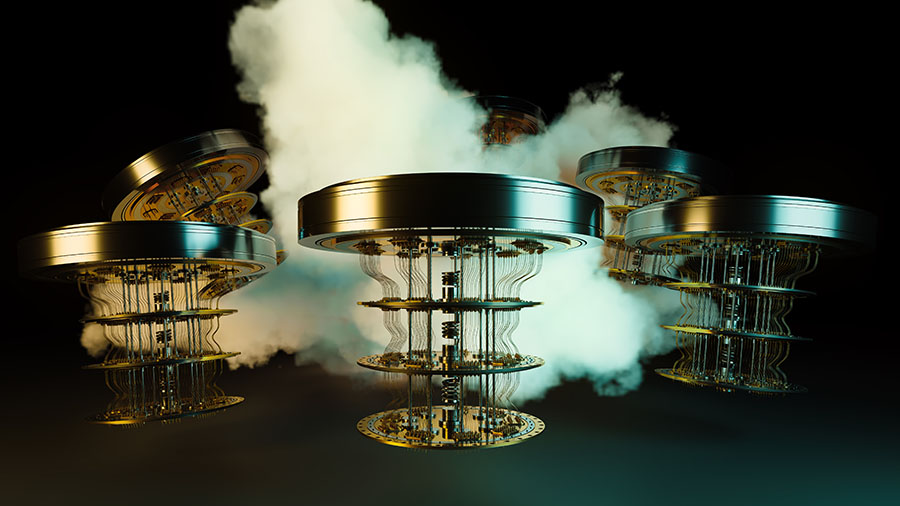 Many predict that quantum computers will have their “first killer app” in chemistry.

In 2019, researchers at Google claimed that their quantum computer, a 53-qubit processor named Sycamore, beat a supercomputer at a commercially useless mathematical task. Since then, other researchers have challenged Google’s claim, but it was the first of several so-called “quantum advantage” experiments, heralding the arrival of functioning quantum computers.

But the question remains: Can the nascent technology do anything useful? One testing ground lies in chemistry, where many quantum computing advocates predict the technology will have its “first killer app.” At this year’s APS March Meeting in Chicago, researchers from both academia and industry—including Google, IBM, and smaller startups—dove into quantum computing’s applications in chemistry.

“There's a lot of cool stuff going on and a lot of reasons to be excited,” says Katherine Klymko of Lawrence Berkeley National Laboratory.

Researchers are most interested in quantum computing’s potential to improve simulations, a key tool in chemistry. Chemists have used computers to simulate molecules and chemical reactions for years, but these “classical” computers have limits. That’s because each extra real-world factor you add to a simulation—another electron bouncing around a molecule, say—slows down the computer to prohibit simulations of molecules with more than 20 electrons. To get around this, chemists simplify these factors, which makes the simulations less accurate.

Quantum computing could change this. Molecules obey quantum mechanical equations, like qubits do (a qubit is the quantum counterpart to a 1-or-0 “bit” in normal computing). For example, in some algorithms, a qubit corresponds to a single electron orbital. As a result, researchers think it will be easier to simulate complex molecules on quantum computers, as they should be less bogged down with each added electron compared to classical computers. For instance, if researchers can simulate how electrons move around a molecule, they’ll gain insight into its properties, like its electrical conductivity or its likelihood of bonding with another molecule.

In short, Richard Feynman’s 1981 words apply to quantum chemistry: “Nature isn't classical, dammit, and if you want to make a simulation of nature, you'd better make it quantum mechanical.”

Currently, researchers can test their molecular simulations only on the imperfect quantum computers we have today. Known as Noisy Intermediate-Scale Quantum Computers, or NISQ (“nisk”), these machines cannot fix their own errors. Existing NISQ computers consist of tens of qubits, while machines in development will have hundreds. (Many think it could take a decade or more to build a computer that can fix its own errors, called a “fault-tolerant” quantum computer.)

Challenges with NISQ computers abound. Their qubits hold on to information for limited time, which constrains the number of computations they can do in a row. It’s also difficult to make qubits interact precisely, so researchers try to avoid operations involving qubits that are far apart, says Robert Parrish of the quantum computing startup QC Ware.

These challenges mean that a central part of developing algorithms is tailoring them to NISQ-era hardware, with all its limits—and researchers have gotten creative. Many use an algorithm developed in 2013 called the Variational Quantum Eigensolver (VQE) as a framework to build their own algorithms. In VQE, a quantum computer and a classical computer work together to calculate the ground state energy of a molecule.

For example, Klymko, from the Berkeley Lab, presented research at the March Meeting on how to break up a complicated molecule into several VQE calculations manageable for the quantum computers that exist today.

It’s not just VQE that involves both quantum and classical computers: All quantum chemistry algorithms use both, Parrish says. Classical computers will always be better for certain calculations, like solving integrals, while quantum computers perform special tasks.

Other research presented at the March Meeting drew from classical computational chemistry, including work by Birgitta Whaley of the University of California-Berkeley. Decades ago, chemists developed a method to approximate a molecular wave function, which describes the allowed locations of electrons within a molecule. Using this method, Whaley’s team devised a quantum algorithm to calculate molecular energies, which they demonstrated by simulating the ground and excited states of a simple molecule made of four hydrogen atoms.

Although quantum algorithms have not outperformed classical ones yet, they’re attracting commercial interest. For example, some pharmaceutical companies think quantum computing could accelerate drug discovery. At the March Meeting, Michael Streif of German pharmaceutical company Boehringer Ingelheim presented work on the feasibility of simulating a drug molecule binding to a protein associated with lung cancer.

“We simulated a full experiment where most of the molecule is described classically, and only the hard part is described quantum mechanically,” says Parrish of QC Ware, which collaborated with Streif on the work. They performed the simulation entirely on classical hardware, which in turn simulated a small quantum computer.

Parrish’s company performs consulting for commercial clients who seek to incorporate quantum computing into their businesses, and those clients are drawn to QC Ware because of its scientific rigor, Parrish says. He says that in-person meetings at conferences and academic publications are “crucial” for demonstrating that rigor.

Industry involvement has also created better-paying jobs for early-career quantum researchers. “It's actually become way harder for [academic institutions] to hire people, because a lot of people are going to companies instead of doing a postdoc,” says Klymko. She hopes that the competition between academia and industry for talent will drive up salaries for academics.

The bottleneck, she says, is the hardware.