Despite the enduring challenges of the COVID-19 pandemic, the crisis spurred teaching innovations that could help students around the world access physics—a lesson I learned firsthand last fall, when people from nearly a dozen countries participated in my course on astrophysics and spectroscopy.

I’m an astronomy professor at the Ohio State University (OSU), but my involvement in physics extends beyond borders. For more than a decade, I’ve advocated for stronger support of physics in nations whose scientists are underrepresented in the field—nations like Egypt, Pakistan, and Bangladesh, where I’m from. My goals have been to invite more people into physics; teach them the skills they need to conduct research, which is still not taught extensively in many developing countries; and grow their confidence in the field. I’ve known for years that international collaboration is vital to these goals, but it wasn’t until last fall that I grasped the enormous potential of online teaching in achieving this collaboration.

After pandemic-related delays, I began organizing a course with lectures on atomic astrophysics, complete with computational workshops, which would take place over three weekends in October 2021. The course would be supported by OSU’s Indo-US STEM Education and Research Center and India’s Aligarh Muslim University, and it would utilize the facilities of the Ohio Supercomputer Center.

I invited a few faculty members and students to attend the course, but news traveled fast, and before long, more than 100 people had signed up. They came from universities across the world—Bangladesh, Egypt, Ethiopia, India, Mexico, Morocco, Pakistan, Palestine, Saudi Arabia, the United Arab Emirates, and the United States. 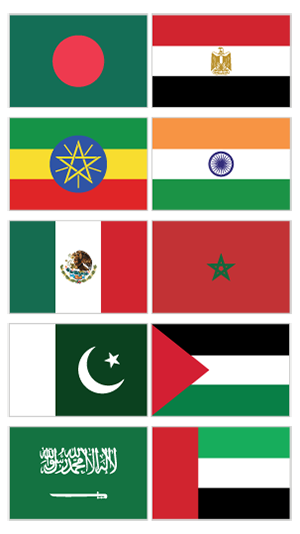 From the very first day of the course, the attendees began connecting, despite being separated by thousands of miles. Participants found common interests and sought ways to help one another, even forming a WhatsApp group to discuss assignments and work out technical issues. Each session lasted four hours and ended at 4pm ET—3pm in Mexico, from where student Aldo Calderon was calling; 2am in Bangladesh, home of participant Mahbuba Aktary; and many time zones in between.

Better still, the online format enabled participation that might have otherwise been difficult for some participants. One participant, Dr. Rahla Nagma in India, listened to lectures while her two young children slept nearby; Habib Abdurrahman Arebu, a student from Addis Ababa University in Ethiopia, periodically battled internet issues but was undeterred. Both excelled on the exams.

Beyond diversity in national origin, language, and background, the participants brought a diversity of physics experience. Whether experimentalists or theorists, undergraduates or seasoned professors, all had unique expertise, and all sought to learn.

The lectures covered atomic and plasma physics (including computations in atomic structure and R-matrix method), astronomy, and spectroscopy, all complemented by hands-on computational workshops on research. There was plenty to learn, but the participants were eager, capable, and sincere. I was thrilled when they received their certificates.

It’s hard to overstate the significance of opportunities like this, which would have seemed unthinkable just a few years ago. But now more than ever, the physics community has the tools it needs to support the best and brightest minds, no matter who they are or where they’re from—to make physics education and research truly global.

To do my part, I’ve worked to expand the benefits of APS membership to international scientists. I teach internationally twice a year, and I’ve helped international participants of these courses, and students and faculty from 29 countries, to become APS members for free under the Matching Membership Program. When I served on APS’s Forum on International Physics from 2012 to 2014, I successfully advocated for free membership for physicists in under-represented countries in Arab countries, Asia, and beyond.

But more must be done. I believe this October 2021 course can serve as an example of effective teaching and collaboration in the global physics community—a community that, like physicists’ passion for their work, knows no borders.

Dr. Sultana Nahar is a professor of astronomy at the Ohio State University, co-author of the textbook Atomic Astrophysics and Spectroscopy*, creator of the NORAD-Atomic-Data, co-director of the STEM ER Center, and adjunct professor of physics at Aligarh Muslim University and Cairo University.